A 14-Year-Old Girl Forced Into the Gaza Cage

A 14-Year-Old Girl Forced Into the Gaza Cage

How did a 14-year-old Palestinian girl who has never set foot in the open-air prison of Gaza find herself being dumped there by Israeli officials – alone, at night and without her parents being informed?

The terrifying ordeal – a child realising she had not been taken home but discarded in a place where she knew no one – is hard to contemplate for any parent.

And yet for Israel’s gargantuan bureaucratic structure that has ruled over Palestinians for five decades, this was just another routine error. One mishap among many that day.

As the USA continues to do the bidding of Oded Yinon’s plan for a Greater Israel abroad, increase the militarization of it’s policing at home, express a failed government at home…I weep for my country. Its government has become what the Founders feared most. Perhaps it is time to water Jefferson’s Tree of Liberty.

This atrocity is NOT out of place or an isolated incident of depraved indifference by the racist supremacist Israeli state!

The Israeli state and IDF employ methods and mindset of vicious racism and hatred, treating Palestinians like nazis treated Jews and others during that heinous regime/period. Now Israelis do much the same in Palestine (and elsewhere) in many ways and actions!

A typical Israeli zionist racist thug, Oren Hazan, MP, said of 17 year old Ahed Tamimi’s slapping an IDF soldier "If I was there, she would finish in the hospital for sure. Nobody could stop me. I would kick, kick her face, believe me." Such is the hatred, racism and violence from Israeli officials, IDF and 'settlers" Palestinians endure on a daily basis - and have for over half a century, especially after The Occupation! 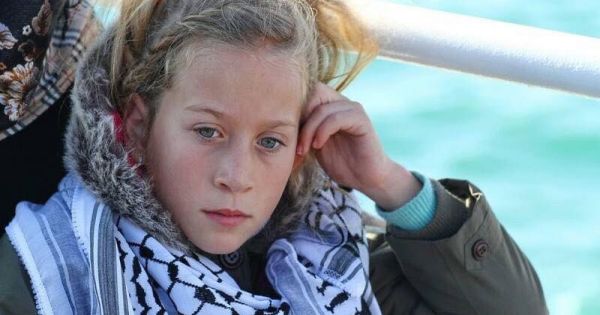 Ahed has been defending Palestine since she was 7 years old. Now she needs us to get her out of prison. Add your name to make this the largest petition ever to free Ahed and all the children in Israeli jails. ...

THAT is the “special ally” the US lap dogs have chosen to align themselves with, culminating in the also racist regime of the orange sycophant dunce!

Israel's Mossad spy agency has long had a reputation for brutality. Its agents have a history of travelling the world using stolen and fake passports of supposedly allied states, and kidnapping, tortu...

On Thursday night, when residents of Nabi Saleh in the occupied West Bank were sound asleep in their homes, Israeli settlers crept through the village’s streets, vandalizing walls with graffiti thr…

Ronen Bergman says that while Israel's shootings, poisonings, bombings and drone strikes against its perceived enemies were "tactical successes," they were also diplomatically harmful.

The vitriol with which Zionists have attacked Ahed Tamimi is directly attributable to their national narrative, and to the myths that promote it, like the one about “a people without a land, a land without a people.”

What was originally designed as a balm to ease the consciences of the well-intentioned, has now morphed into the more nefarious denial of the very existence of the Palestinians as a people, if not as human beings.

As the blond-haired blue-eyed child-manifestation of that original sin, Ahed Tamimi dredges up the very deepest, darkest and most visceral of Zionist hatreds.

That they think it is OK to actually verbalize the some of the most disturbing and bigoted of comments towards a child, just 70 years removed from the horrors of the Holocaust without a hint of irony or shame, can be directly attributed to the evils borne of the Zionist narrative.

No perhaps about it.

I will never understand how these Zionist thugs cannot see the hypocrisy of their actions - how they are acting EXACTLY like their own oppressors once acted towards them. Treating an entire group of people as sub-human animal scum. Yet, somehow they are unable or unwilling to see this hypocrisy in themselves. Or they do see it, and simply do not care.

Pro-Israel, pro-Zionist apologists say “It is NOT the same! You do not see the Israeli’s putting Palestinians in gas chambers and ovens!” as if that somehow makes what they do to the Palestinians ok, since it does not rise to the level of depravity as the Nazis. Gee, such a low bar the Zionists set for themselves.

Much like the U.S. is doing as well; once upon a time we fought the fascists, gave hundreds of thousands of our citizens’ lives to wipe that sick ideology from the earth, only to now, 70 years later, see it rise again in our own streets, marching with torches and protected by the police, and even ascend into the Oval Office and occupy the majority of Congress.

Perhaps it is human nature always to become that which we most despise.

We would not tolerate such human rights abuses in any other country. Why do we not only turn a blind eye to what Israel is doing to Palestinians, but supply it with millions of dollars in aid to fund its military that is responsible for so much suffering?

You can’t criticize the organized Jews of Israel as that would be anti-Semitic (and we know that’s bad). If we want to criticize, we have to mold reality and re-label those Jews as Zionists. That would leave “Jews” unblemished: You are allowed to have a nasty opinion of Zionists, as long as you continue to hold Jews per se above criticism, worthy of special consideration because of the holocaust.

If Jews as a whole want to escape blame for the conduct of the Jewish State, they should be the loudest condemning voices, not attack dogs (like the Anti-Defamation League) seeking to silence and destroy any critics of the State or of anything Jewish, wielding the dreaded, career-destroying, label, “anti-Semitic”.

Don’t get me wrong: not all Jews are bad. But organized Jewry leaves a lot to be desires (to put it mildly) – they sure know how to milk the US , and should not be made sacrosanct.

Based on my own commitment to a free and united Ireland, I had supported for many decades the right of a Jewish state to exist. But as Ireland became more secularized and open to people of all ethnicities and creeds, I had to recognize that any state based on an ethnicity or religion will always degenerate into hatred and violence. Only when a Catholic Ireland became a thing of the past did a long nightmare begin to end in my homeland. And only when the entire area now controlled by Israel becomes one democratic country with equal legal and voting rights will peace come.

“Not all Jews are bad.” Geez, is this your “I’m not really racist” card? Pathetic. WTF is “organized Jewry?” The state of Israel? New Jersey Association of Cantors? A bowling league? You have so much resentment and bigotry going on that you sound sort of nuts, like some guy ranting on a street corner, spewing little flecks of spittle all over himself. Get a grip. Treat each person you meet with the same basic decency with which you would like to be treated

Although overall I agree with the article’s point of view, I must object to describing a 17-year-old as a child. Please do not infantilize teenagers, because doing so supports practices in many countries (such as the US) which are used to clamp down on their lives and hold them back from maturity.