'Absolutely No Respect for Human Life': Trump Compares Turkish Assault on Kurds to Two Kids Fighting in a Parking Lot

There was a time many of us genuinely thought Bush was as bad as it could get. How young we were…

Greta is in Edmonton Alberta today. We are giving this person way too much airtime:
https://edmonton.ctvnews.ca/significant-traffic-delays-expected-with-greta-thunberg-in-edmonton-for-climate-march-1.4643670

I’m extremely curious about the rather selective and sudden pearl clutching by the left.
The crocodile tears over “ethnic cleansing” and abandoning the Kurds.

What did you think was going to happen when Obama (pushed like a feather by regime-change warmongers like McCain and Hillary) armed jihadists to topple Assad, and aligned with the Kurds to fight ISIS? That Russia would let Assad fall? That Turkey would welcome a Kurdish statelet on their doorstep? Did you miss the body count, ethnic and sectarian strife, and refugee outcomes in the other regime-change wars? The ones some of us decried in the first place?

And I didn’t hear diddly squat when the Turks ethnically cleansed Afrin:

Once a haven for refugees from the war in Syria, Afrin has found itself a flashpoint

Your anger is rightly justified and millions, including myself, feel much the same, incensed actually, as we react to the depravity and contempt for all life this hideous creature exhibits daily, and the effects on others and our Mother Earth.

How we verbalize our feelings, resist his political/social filth, and utterly destroy the corrupt, depraved mindset of this person and people like him who have such genuinely evil, destructive, greed-drivem, ignorant and pathological beliefs - the utter lack of common decency and/or empathy is the question.

As manysummits wrote above; “we are giving this person way too much airtime” - we must focus more on those who fight the depraved indifference.

Referring to Kurds living along Turkish border in Syria, Trump says of Turkey, “they had to have it cleaned out.”

What we should expect from a racist pig who identifies with Andrew Jackson.

we must focus more on those who fight the depraved indifference.

He’s an enemy of life, and it would have been better had he never been born. 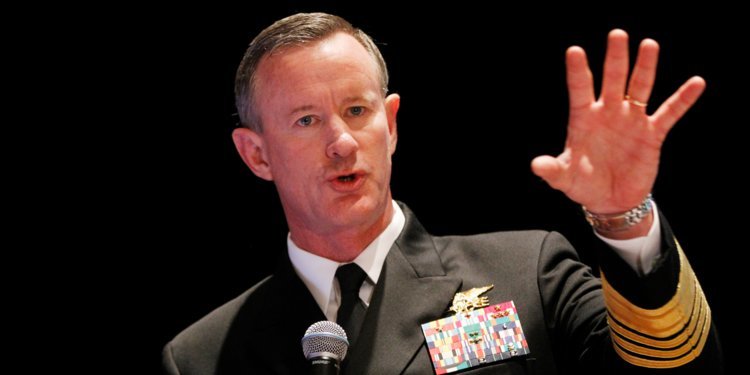 Admiral McRaven: "Our Republic is Under Attack from The President"

Admiral McRaven, a retired Navy SEAL Admiral, former Commander of US Special Operations Command, and former Chancellor of the University of Texas has penned an OpEd in the New York Times that is worth a read. The Admiral draws two ceremonies he...

I don’t have access to the NYT, this is as close as I can get. There is movement that will be hard to stop. We have friends i high places.

I quoted you but it didn’t work for some reason, sorry. Please see my comment about McRaven.

Everything you mentioned there is a win for everyone EXCEPT the Kurds.
There’s your genocide that you are asking to see.

Hartmann and others have been stating that the kurds have been ‘abandon’ by every Republican president since HW Bush. You make a good point that comes to my mind lately. Obama screwed them too. So, ans some here would say (including myself) that Obama was another Republican, just part of the Duopoly.

This man is in desperate need of a beating.

You really have been ignoring the news now haven’t you?
I suggest starting by brushing up on Kurdish history.
What’s really dismaying is how you can’t see that from your own comments how Kurdish needs are swept out of sight. You didn’t even mention the Kurds when you said “its a quadruple win.”
Think about it some more.

I would suggest, “Stay tuned.” If the Kurdish population hasn’t relocated in five days (now four)–men, women, and children; hale or infirm–you’ll see death. (Indeed, reports are it’s ongoing.) Will it be “cleansing” or “genocide”? I don’t think the distinction will matter much to the Kurds. They’ll be homeless refugees and Turkey will be saying, “It never happened,” like the Armenian genocide.

Erdogan and trump - perfect together, neither gives a damn about civil or human rights, or life of other people. Both racists and bigots.

This atrocity and attack in Syria against the Kurds, men, women, children - entire families, is a war crime clearly cooked-up by erdogan in his pathological hatred and fear of the Kurds as they fight for their homeland - the orange idiot hasn’t the slightest idea what the history of the region is, or the consequences of his actions; trump is a dictator/strongman "admirer and lap-dog to the extremism and/or atrocities any of them commit - trump is a slavish fawning wannabe, sucking-up to powerful scum and killers like erdogan!.

Such is the “leader”, fuhrer, the US chose to be its political head, only to get a depraved, ignorant, un-educated, raving racist bigot, pathological liar, and malignant narcissist fool - a grave mistake that has serious consequences for the Kurds and other at-risk peoples, America and the entire world. If only this contemptible thing reaps what he has sown all his worthless life!

A really sick, sick man with no dignity or honor. Does he represent the United States?

Greta is in Edmonton Alberta today. We are giving this person way too much airtime:

Bush was as bad as they can get. He embroiled us and the world in massive wars with many, many deaths. Trump really hasn’t done that but he is the theatre of the absurd. We are probably laughing stalks of the world but maybe that is better than being a respected murdering bully. Trump is a bully but his murdering is on a much lower scale than Bush the Bully.

And here’s why the Kurds aren’t mentioned in the quadruple win scenario: they had no power to broker anything without a lifelong commitment of US protection, aka, an endless occupation in Syria – which, of course, they were never going to get.

I had a lot of respect for the secular, egalitarian statelet the YPG set up. But my respect was matched by the foreboding I felt on their behalf because I knew that their statelet was inevitably doomed. Frankly, I’m sure they knew it too.

We now know what it is like to have a boy with a 7th grade mentality as our leader.