B. Lee would be an improvement as long as she throws israel and friends under the wheels of the bus along with nancy and all the other so-called leaders of the demodogs.

Corporate State Democrats are going to do most of the mud slinging at these “extreme leftists”.

I watched a clip of Rachel Maddow (at my own peril) reacting to the news of Ocasio-Cortez’s victory, and she could hardly contain her angst against such news. She will be front and center in characterizing such true populist candidates as being not viable for Democratic take-back of the House in the midterms.

Her and a whole bunch of “centrists” will join in.

Take time to get to know Barbara Lee, she is all that and more.

Never will forget a co-worker’s remark on the day after the AUMF vote, 434 - 1, with Congresswoman Barbara Lee as the lone dissenter. “She won’t be long in Congress.”

While he’s long gone from our workplace, look who’s still serving in Congress, and also headed for a leadership position?

Yet she persists! I much admire Congresswoman Lee.

I haven’t watched her show for years (or TV for that matter), but on occasion I’ll watch a tiny snippet of a clip on Youtube. I’m trying to eliminate self destructive behavior, but have a bit of distance to go yet.

Rachel Maddow is worth $40 million bucks. ( It is very hard to be against… well, you know. ) She used Air America like a Teamster uses a rented team of mules. She did for Air America what Al Franken did for Paul Wellstone’s legacy.
Congresswoman Lee, on the other hand, is a breath of fresh air to listen to during the infrequent times she is interviewed. She’d be a great addition to the leadership in the House.

Love that name, Rayshell Madcow. Thanks for the laugh.

Yes murdered by the dark side!

The National Lands Coalition ( pretty sure ) was meeting there the day Sen. Wellstone died. His ( my friend who represented Washington the state ) recounting said the weather was nasty, the plane came almost straight down, etc. Damn the luck.
I’ve heard the stories… oh well, so it goes.
The Wellstone Foundation is in a very sticky situation, currently. I’ll leave it there.

Those who are still watching are beyond intellectual appeal.

I was hoping she start prepping for a run for the White House job in 2020.

“Barbara Lee is one of the bravest and most underrated members of Congress.”
—Rep. Barbara Lee

If Trump can toot his own horn, so can Lee. haha (for typo)

But really, we should be so lucky as to get Barbara Lee as House Democratic Chair. Luckier still to have her replace Pelosi.

Barbara Lee has been a great leader and would be great as House Dem Chair!

The DP establishment, Clinton/Obama wing, is only spewing BS propaganda and blowing smoke rather than any dedication or intention of real change. Just like the so-called “major step” reigning-in (supposedly) the S-delegates power to subvert the will of the people in nominations. Likewise the establishment powers will likely sabotage Lee’s run for Dem House Chair in favor of a predictable sellout shill, just as they did to Kieth Ellison in favor of a neo-liberal “centrist” like uncle-Tom Perez!

The DP establishment is only posturing, not really seeing/admitting the writing on the wall of their failed and disastrous arrogance over the lase several decades (at least)…they will never cede power to the Sanders Progressive People’s wing of the DP!

The DP establishment didn’t want to give Bernie Sanders any “win” with Ellison being close to Bernie, they had a woodie for him since the primary when he garnered such great enthusiastic support from the Dem base and progressives around the country and the Red Queen did not! 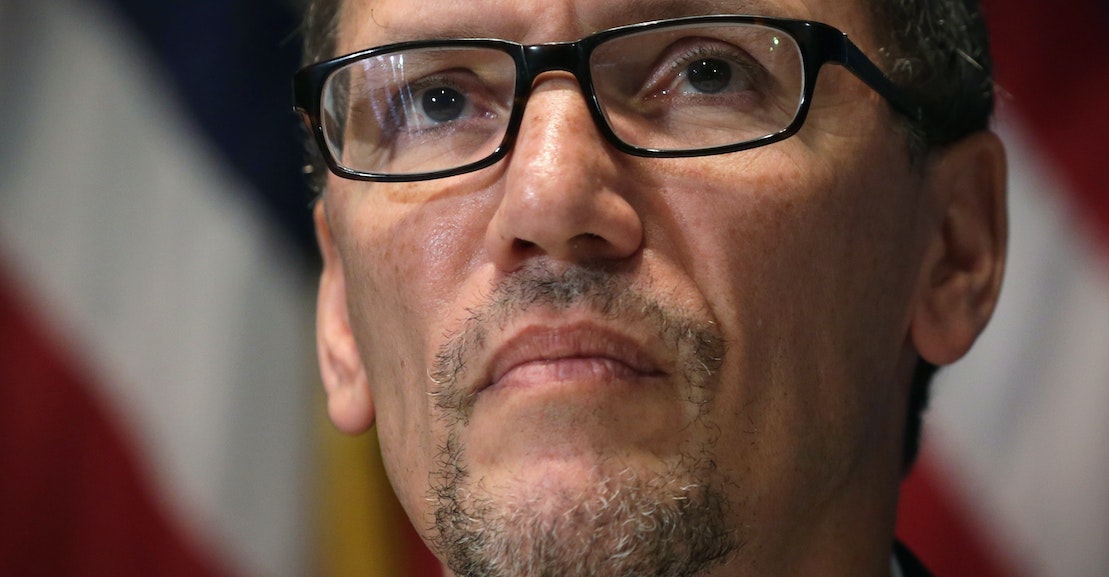 The Case for Tom Perez Makes No Sense

His supporters say he’s just as progressive as Keith Ellison. So why bother fielding him at all?

His supporters say he’s just as progressive as Keith Ellison. So why bother fielding him at all?
Since both parties basically support, cater-to, and serve the same masters, the DP establishment sellouts will beat their chests on how terrible it all is, but do little or nothing of substance…will not really fight as they have not since trump was s-elected, and “AIPAC” Chucky Schumer will cave to R’Cons/trump and betray us all as he always does…just like the scorpion, its his nature…

A strong wave requires deep waters and the Democratic Party’s historical commitment to progressive issues is a body of water filled only from the condensation from the words coming out of their campaigning mouths.

In Obama’s case, it evaporated between election night and CitiGroup’s selection of his cabinet.

Ms. Lee is entirely an anomaly in the party, and the good she does should not reflect on the party but her voters. We’re the ones responsible for what we elect, never for what we reject.