"All That We Love Is On the Line": Progressive Coalition Offers Moral Case and Action Plan to Win Medicare for All

"All That We Love Is On the Line": Progressive Coalition Offers Moral Case and Action Plan to Win Medicare for All

At the Sanders Institute Gathering on Friday, former Ohio state Senator and Our Revolution President Nina Turner repeated the call several times as she rallied a room full of Medicare for All organizers and supporters—"All that we love is on the line."

"That's all! Only all that we love is on the line," she repeated.

"The only thing that stands in the way of Medicare for All in the United States is a lack of political and moral will. The moral argument is the only argument strong enough to create the political will necessary." —Jean Ross, NNU

We need new Laws written and passed. Stop pleading, debating and discussing… Just Do It!

As this fight plays out, it’s very important to understand the difference between the House Bill (considered the Gold Standard) and the Senate Bill. Best described here: http://healthoverprofit.org/2018/11/29/importance-of-aligning-house-and-senate-single-payer-bills-the-right-way/

When hasn’t the House and the Senate had to go to reconciliation to pass any meaningful legislation?
It’s not nearly the case of either/or vs. nothing good at all. The authors admit that much.

The ACA was a compromise made to give us crumbs and push the inevitable down the road many more years. We have many millions not covered. We have many millions more not able to afford co-pays. We have insurance and pharma companies making out like bandits as prices only go up. We have people trying to fund their operations on GoFundMe.
So now lets get this done right and completely, like so many other countries around the world have done. No more half measures. So when they give you a title of what they’re doing, make sure you understand the fine print!!! And demand it all!!!

From Democracynow:
Listen to our British supporters who treasure their system! 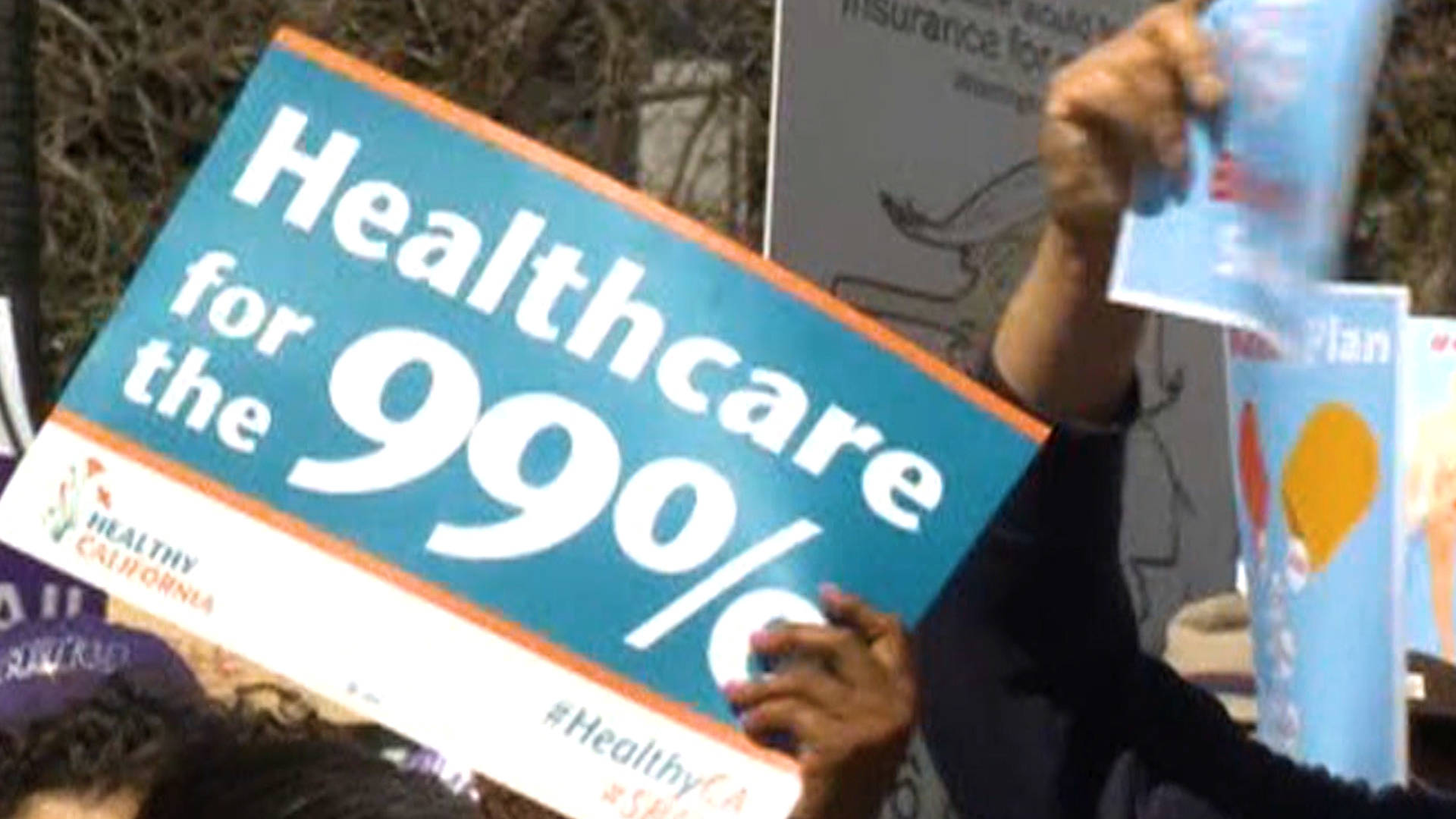 Medicare for All: As Healthcare Costs Soar, Momentum Grows to Guarantee...

The denial of a National Health Care program to American citizens since the
FDR administration’s end is evidence not of the morality of any of our American
leaders since then, but evidence of their lack of morality and their own greed for
money and power.

The fakery of the Cold War and the McCarthy Era purged all liberals from government.
Later liberal and moderates were also removed under various programs of targeting –
and my feeling is that the CIA carried out a purge of what was left of liberals and
moderates in both parties by the late 1970’s using the NRA and the 2nd Amendment
as a front for their purges –

These liberals and moderates who remained in both parties were the likely members who
would support investigations of intelligence/Pentagon and their accountability – the CIA
most especially. See: Church Hearings

The 2nd amendment as relating to “militia” was soundly supported by the Supreme Court
for more than 100 years based in “arms” for those troops. IMO, the overturning of this
amendment to arm the public which has brought great disruption to our societies and death
to citizens in accidents and mass murder was necessary to the rise of the right wing in order
to bring disorder to the nation and to create the violence of their fake Drug War and drug-
running. This fake Drug War has also been used to disrupt many other nations on this planet.

Tell me about it. I have two open medical files, work 40 hrs a week, am on Medicare… Sucks.
But, I’ve being fighting for Canadian-style healthcare for 30 years, too.
" keep on keeping on ".

I worked in several areas of “healthcare” as a reg nurse for over four decades and have been on the receiving end many times. And have seen the devolution of services from the 80’s on. During my personal experience as a patient I have found that it is very difficult to find decent nurses and doctors in general and specialized hospitals and out patient services.
Single payer medical services is necessary to cut out excesses of payments to insurance and pharmaceutical industries however there are many other endemic problems to conquer besides wasteful losses due to those industries. But that is a topic for another day. However I will say that one of the biggest crimes in our society is the abuses of the food industry with the chemical crap they sell as food. With improved nutrition people would have less need for services from the medical “industry”.

This certainly seems to be picking up momentum. On the down side, the Republican Party had moved much further to right since the effort began. However, with Democratic control of the Senate and House and a Democratic president there is a chance it could pass. But if it means taking on the health insurance industry and pharmaceutical industry it is likely they will have the power to stop it through threats to withhold contributions from members of Congress and scaring people with TV ads and internet ads and a general public relations campaign to stop it. Most likely the best hope of improving healthcare coverage is by expanding Obamacare. It may be politically impossible in the US to achieve more.

We seriously need two campaigns funded by the public –

and the other for Equal Rights Amendment for Women – !!

$5 bucks from every female?

" eight years after the passage of the Affordable Healthcare Act (ACA), millions of Americans are still without health insurance."

and about one year after the repeal. Odd that it was Republicans ranting and raving about being penalized for not buying insurance. A Republican wrote the SCOTUS decision defending the penalty on the basis that it be used to help pay subsidies. Then the Republican hero of all those ranting Republicans decided to stop paying those subsidies–oh, but he still charges that tax for not buying insurance, which means, according to John Roberts, now it IS a penalty and now it IS illegal–but the ranters are now silent.

Right after April 15, 2018, the IRS put out a statement that charging the tax penalty was no longer warranted. News of it got buried. Back in 2017, the IRS and president went back and forth regarding charging it, and decided they would. My guess is (though feel free to test it out,) they will, in fact charge this illegal penalty.

“Medicare for All” isn’t universal health care. Based on all I’ve read, it comes at the expense of Medicaid. Low-income seniors and the disabled, for example, rely on dual benefits, Medicare/Medicaid, with Medicaid covering prescriptions, etc. (Medicaid further goes toward subsidized rents for assisted living apartments.) Of course, Congress knows that anything resembling universal health care would make no sense in a country that’s years into its war on the poor. Lack of adequate food and shelter take a heavy toll on human health.

The very poor can’t afford “Medicare for All.” If expanded to include something like Medicaid, what would be the logic of allowing anything more than emergency room services to the poor? It’s not possible to maintain health without adequate food and shelter. Since Democrats ended basic poverty relief, the overall life expectancy of the US poor already fell below that of every developed nation.

The very poor can’t afford “Medicare for All.” If expanded to include something like Medicaid, what would be the logic of allowing anything more than emergency room services to the poor? It’s not possible to maintain health without adequate food and shelter. Since Democrats ended basic poverty relief, the overall life expectancy of the US poor already fell below that of every developed nation.

Totally agree and sympathize and agree with what you’re saying, but if Medicare4All passed certainly we would also be on our way to reestablishing welfare programs and restoring full employment benefits no matter how long you are unemployed.

Medicare4All would take a full return of the LEFT to power – indicating, imo, that we would also end homelessness and unemployment.

It’s all wishful thinking – and it certainly isn’t going to happening with right wing in charge of both parties.

If Medicare4All did happen first, certainly no one would not be covered – i.e., no money to pay, you’re covered anyway.

Realistically, shelters are frightening now – a pretense of caring for the unhoused. They are dangerous places. All of that would have to be immediately reversed.