I hope this young lady (and the rest of “The Squad”) watch their backs. In today’s u.s. it is not healthy to cross the grain of capitalism and corporate power. I won’t be around but, I hope, when she is old enough, she will start picking out wallpaper for her move to the White House.

The American business model is based on non-sustainability. Corporations have to profit in order to break even.

The Guardian reported that “from the moment she began speaking, the main hall at the summit became completely still, and when she finished, the ovation she received far exceeded that received by the veteran climate campaigner and former Vice President Al Gore, Denmark’s prime minister, Mette Frederiksen; or the U.N. secretary general, António Guterres.”

The favorable response could be the result of her honest passion for what is true instead of smarmy political gobbeldi-gook. Also the world must feel that finally the oosa has a reasonable representative to speak for us.

AOC is the human deus ex machine that brings the " problem ," to a miraculous ending, Or in simpler terms, she speaks the Truth and ignites and excite people into action— and these are people who listen, learn , and know that change is possible right now!

I would post but one word but this machines coding won’t let me…Leadership…well, maybe a few more…it’s rare, trust it, follow it, help it.

I am so proud of AOC for telling the truth about climate change and human folly.
Our societies and economies are wholly based on plundering, killing, exploiting, mining, fracking, fishing, hunting, bulldozing, paving and otherwise destroying the biosphere.
Every individual choice we make–having children, operating a leaf blower, going on a pleasure cruise, eating flesh, drinking milk meant for baby cows and goats, etc.–each of these choices add up to anthropogenic mass extinction.
At the systems level and the individual level, if we are to avoid a complete ecocide by 2050, there needs to be an ethical awakening and a massive restructuring.
It won’t happen, because humans are too selfish and weak to live as if the biosphere and innocent animals had rights, but it’s good to have truth-tellers like AOC.

How did we, not as a society, but as a horde of blithering imbeciles, how did we arrive at the point where the obvious factual truth, supported by all empirical evidence that can be brought to bear on climate, sustainability, and capitalism, and at the very moment of the existential threat of all three weighing on the very possibility of our human existence - how did we arrive where only a person or two among our chosen leaders even talks about these issues at all? Kudos to Cortez, apparently the only intelligent person in the District of Columbia. 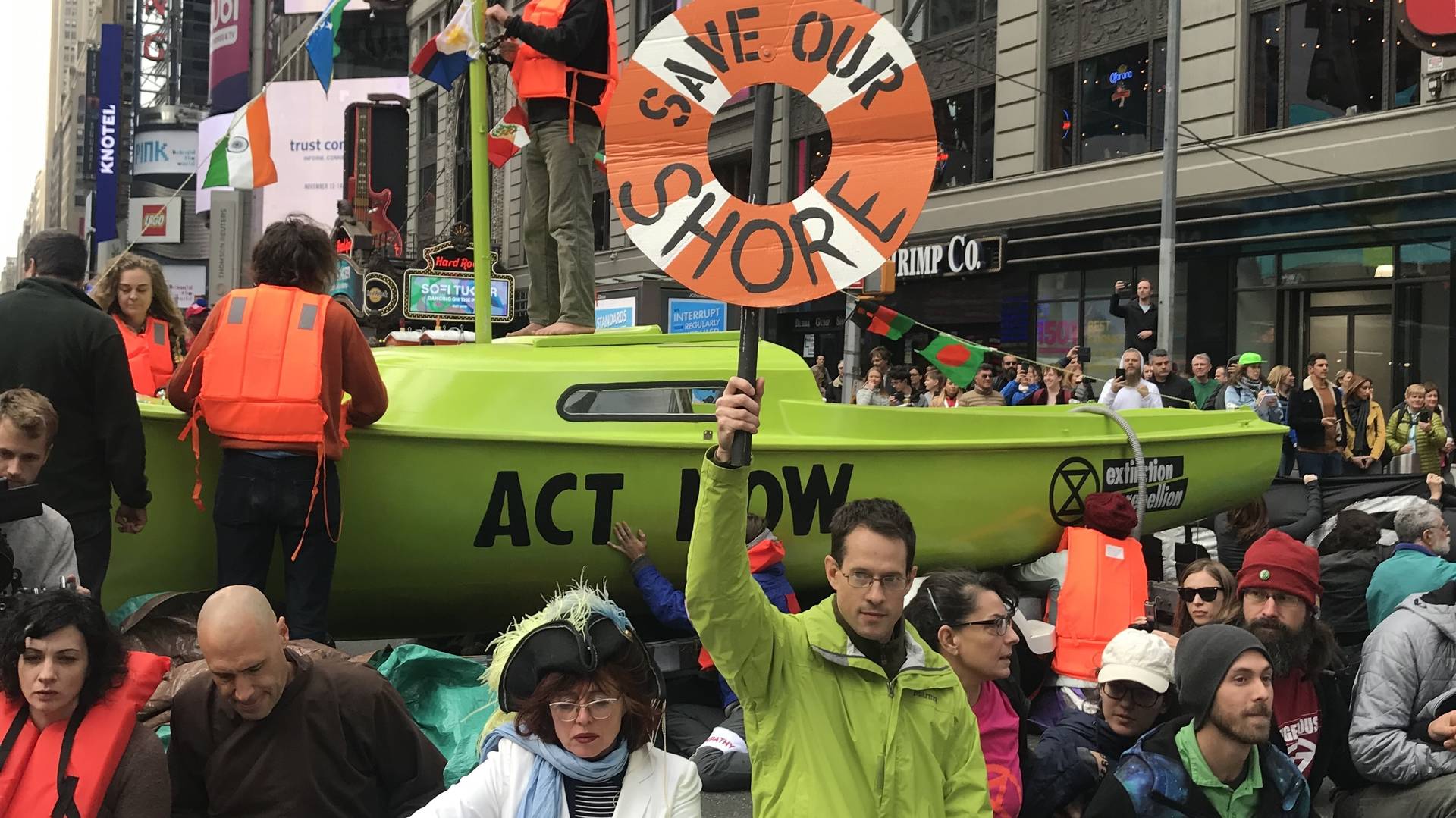 Dozens of protesters were arrested Thursday morning after shutting down an intersection in the heart of Times Square as part of a climate action organized by Extinction Rebellion. Members of the group parked an 18-foot boat in the intersection as...

The corporate media would not be able to downplay AOC’s endorsement of Bernie.
PLEASE do so, Alexandria!

one of the few things left to be proud of in Amerika - AOC!

Basically every Single American politician who gives a shit at all about America, about out Children’s future, and about humanity was at that Summit. AOC Alone.

I am more and more despising this woman.

We know what to do.

So freaking stop pontificating for your own publicity and cosponsor legislation or write you own that actually attempts to creat law that will do what we already know needs to be done.

But no. She forgot her promise to support someone else’s comprehensive legislation as soon as she realized she could pose on this and advance her own career.

(getting ready for the naive who think she’s a hero to attack me.)

And freaking stop the Elizabeth Warren tactics and come out and support freakin’ Bernie Sanders.

I have less and less respect for this woman who is not what you all seem to think she is.

I only take issue with your last sentence. There may be a half dozen or so more.
Frightening, huh?

If you despise AOC, that tells me you’ve got serious problems in your mind and heart.
She’s put forward a lot of legislation, has gotten other progressives elected, and defeated a corporate Dem.
I’d bet that AOC has done more good in the last year than you’ve done in your entire life.
Don’t diss AOC. You sound like a jealous loser and stupid twit.

If you despise AOC, that tells me you’ve got serious problems in your mind and heart.

The problem I have in my heart and mind is we’ve got only a few years before it’s way too late to save the ecosphere that we’re dependent on.

She’s put forward a lot of legislation, has gotten other progressives elected, and defeated a corporate Dem.

It’s great she defeated a corporate Democrat. I just fear she’s turning into one too as she absorbed by the Blob. The signs that concen me are her jumping on the impeachment bandwagon, her attacks on real Socialists in Venzuela, her support of the MIC in Israel, and her refusal to come out and support Sanders.

As to her legislation she’s introduced? I’m open to being educated. Please inform me what she’s down, specifically for countering global warming and the use of fossil fuels besides her vague resolution that even if passed doesn’t do a damn thing as it’s just a suggested shared talking point of the House. Inform me.

I’d bet that AOC has done more good in the last year than you’ve done in your entire life.

This isn’t about me. It isn’t about comparing AOC to me. That’s apples and oranges. I’m a citizen activist now limited to blogging due to my poor health. She’s a politician and legislator. The persons to contrast her with are other politicians and legislators who actually have proposed and fought for actionable legislation or plans. Need I name them?

I’m calling crap on the idea that she is doing anything about the climate catastrophe. Don’t tell me she’s calling attention to it and we need that before we can do anything.

She could have done that and sponsored or co-sponsored actual, comprehensive legislation that is measurable and actionable, instead of a vague talking point.

If supporters of her like you want me to shut up about this, convince her to take Bernie’s plan, write it up as legislation, and INTRODUCE IT.

Don’t diss AOC. You sound like a jealous loser and stupid twit.

Didn’t take long, did it, for me to be attacked.

We’re all losing. Twits are those who think talking about someday starting a committteee to start talking about taking action is what is needed at this late date.

But that’s not what AOC is doing- unless you can convince me, as I asked above, that she has written legislation like that or co-sponsored something like that.

Until I’m shown wrong it seems to me that what AOC is about is virtue signaling and that’s it.

Thank you for proving my point.