As Buttigieg Attends Fundraisers of Ultra-Rich, Sanders Reminds Voters Billionaires Not Donating 'Through Goodness of Their Hearts'

First, all billionaires don’t give to PACS.
Second, Bernie has PACS too (not Warren yet).
Third, some rich folks - just like you - may like a candidate for personal reasons. For instance a CD post recently was denouncing the “oligarchs” who support Buttigieg. The list of his billionaire donors included… “Notable backers: David Geffen, Mimi Haas, Jennifer Pritzker”. But if you dig into each one, you find that…

So, yeah, they may be billionaires but since they only give personal contributions (that are maxed by law), they don’t contribute to PACs, and they all have personal reasons to support the first openly gay presidential candidate… what is the problem? I mean, we have to be fair also!

Money speaks in many ways. Let’s not be naive or cunning. A majority of billionaires show support for an anti-socialist, plain and simple. This is a 1% vs 99% issue. Their monies will eventually seep into and corrupt the policy makers in Congress. It is intent that is obvious here, not the amount of the actual donation to Buttigieg under Federal guidelines. And it is power and money that gives access to subvert democracy, one person, one vote.
The elephant in the room, the algorithmic rise of global warming, climate change, destructive super storms, scorching earth, coastline flooding, melting glaciers with loss of potable water to billions, poisonous gases. Shake your head out, get rid of the bullshit, listen to the scientists. We may have one last chance to save our asses, lets get behind the person that will seriously deal with this existential crisis NOW. Slow and steady, and change not too fast, is the recipe for ecocide and extinction.

Just to put things more in perspective here, the Washington Post has a history of giving Sanders “PINOCCHIOS” that are bullshit. 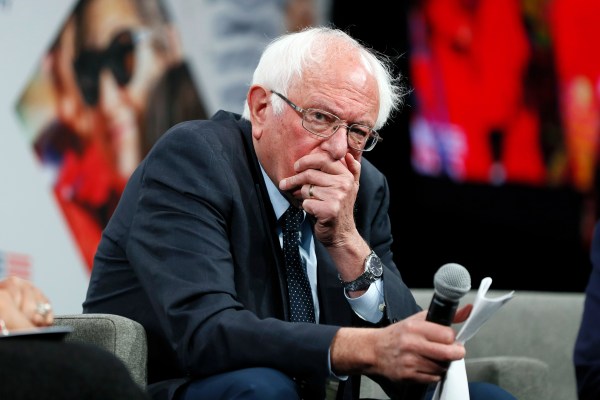 Sanders is right. That’s who they are.

Today’s management consulting firms are quislings, complicit in all the evils corporations do: tax evasion, corrupt lobbying, environment degradation, cheating employees, wealth distortion. Too often, they are hired just to repeat what is already decided by the hiring CEO, but who needs a cover, because what is planned is dastardly, like closing a plant, laying off workers, stealing their pension, giving a bonus to himself, etc., things that bring bad press, or a hard sell to the Board unless they also have cover.

That cover is the ‘recommendation’ provided by a consulting firm. Hence you hire the biggest name you can afford, just so the ‘recommendation’ is on their embossed letterhead. And there’s no bigger name than McKinsey, where Buttigieg worked for three years, closing plants and firing workers at corporations like Blue Cross in Michigan. As Norman Solomon wrote in CD, Buttigieg is a glib talking, flimflam man.

If the choice is Trump or Buttigieg, I’ll leave that part of my ballot blank or vote Green.

39 billionaires have donated to Mayo Pete.
0 to Bernie.

Enjoy Mayo Pete’s descent. He had a good run. Then people figured out that he’s Republican Lite.

Also both SANDERS and WARREN had their claims of “grass root” fundraising fact-checked at TWO PINOCCHIOS earlier this year.

Oh, well gosh golly, they have never given Pinnocchios for nonsense reasons, right? I mean, they gave Bernie Pinnocchios for things he said that were factually correct. The “fact checker” at the Post said that he wasn’t being accurate when citing a study they cited themselves months before in regards to bankruptcies caused by healthcare costs. He said that about 500,000 file per year. The Post questioned the numbers, and manipulated the study, so much so that the author requested that they print a retraction (which they refused to do). Turns out, the damn Post itself quoted that same study months earlier and wrote an article saying the same thing. But, months later, the “fact checker” questioned Bernie using that number. And there are endless other examples, like Kessler’s absurd lies, sorry, “fact checking” Bernie on single payer, them running 16 negative stories in 2016 within 24 hours, among other things. Come on, this is a hacky defense. Try again.

We have to be fair here: Buttigieg isn’t any worse than what the other two have been doing for decades.

Are you out of your mind? Even if Bernie transferred in money, he has never taken corporate bribes or money from big money donors. So, he was transferring in money from the grassroots. That is not comparable to a corrupt ghoul like racist police lapdog Pete. And Warren has taken money from big money donors, just months before running. Some of them did call her out. As I said above, she is not at all comparable to Bernie, and that is just one example of many. Just months ago he was giving somewhat competent defenses of single payer and he is now an attack dog against it, using industry talking points. Think him getting more support form insurance company interests than anyone else has anything to do with this?

Do you care about objective reality? There are countless studies showing the large and growing gap between what people want on policy versus what the state does. The 2014 Gilens and Page study, the 2018 Piketty study, Stephanie Mudge’s book “Leftism Reinvented”. People like you are dominant in the neoliberal period, where your job isn’t to organize working people or to come up with good policy, your job is to do bullshit gaslighting propaganda and to try and manufacture consent. Instead of people having actual societal worth, their worth is simply in cementing power for a corrupt power structure that pays your bills. Endless examples of the systematic corruption in government. Those studies are why Carter says that we are effectively an oligarchy. The rich are the only ones at the table when deals like the TPP are negotiated. When Obama negotiated the TPP, there were 500 corporate advisers involved in the negotiations. They had full access to the agreement. The politicians did not and had to threaten to sue just to look at it. They were thereafter barred from talking about the contents of the agreement in public and could not share the draft with the public. Yet, again, 500 corporate advisers had full access to the agreement. Same thing with the WTO and for that matter even the EPA. The EPA has boards that decide on whether or not something causes cancer. One was in regards to Atrazine, an endocrine disruptor and a likely carcinogen. The board that decided on that was stacked with people from the industry, all the data that they used to analyze that came from those interests.

I could go on and on. You should try this garbage with other outlets. Not only is no one here going to buy your bullshit but people know these issues to well to pay your BS any mind.

Pete in Napa at a fundraiser with the Halls?

The Halls were worth $4 billon BEFORE Trump’s tax giveaway to the wealthy. They are best friends of Bill & Hillary - the neoliberal war criminals who helped incarcerate minorities & economically rape the middle class and poor for a generation.

Craig Hall is known in Napa as an arrogant weasel who cares nothing for the poor and working class. He hobnobs with the wealthy and funds the campaigns of neoliberal Dems.

This reflects exactly who Pete is - a puppet of corporatist plutocrats and oligarchs.

Pete already flipped on Medicare-for-All at the behest of the greedy insurance industry plutocrats.

He is a fraud and cannot be trusted

But as a chief executive? Not going to happen. The reason Pete and other centrists gain traction is that their message resonates with Americans

You think Pete has a better chance of being president than Bernie? And you think that he resonates with Americans more than Bernie? My god, I won’t even bother with such silliness.

Tell me though, on policy, is Bernie or Pete closer to popular opinion? If you want to pretend Pete, please provide data. I am being kind though in even pretending Pete has positions. He supported single payer up to a few months ago and ran in Indiana while rejecting bribes (which is what they are) from financial interests. He said at the time, correctly, that they were corrupting. Now, magically they aren’t, and wouldn’t you know it, he went from supporting single payer to now being an attack dog against it while using industry talking points. Him getting more money from those interests than anyone else is just a coincidence, and corporations are known to give money to candidates because they like how they play the piano.

Yes, Americans love empty people running for office, being blatantly corrupt and offering up policies that don’t solve any of our problems. Mmmm, more please. My god are his campaign internet trolls third rate.

To think that racist police lapdog Pete has any chance is mind blowing. Trump would make mincemeat out of him and Trump (amazingly) has more support from black voters than he does. Dead on arrival.

And his mini army of apologist equivocators is giving new meaning to the word “flailing.”

I’m getting the sense that Mayo Pete’s campaign is flailing too…funny what sunlight does.

These people have been marching us to the edge of the cliff for decades now:

This is How a Society Dies

About three weeks back an article was carried here on Common Dreams about the Sanders campaign returning a donation to his campaign of a few hundred dollars to a billionaire donor. I suggested then that had they not done this the spinmeisters at places like the Washington Post and or other persons such as yourself would claim this as “proof” that Bernie accepting money from Billionaires just like everyone else.

It like you were just waiting in the weeds to spring this gotcha!

Wow. What a clear analysis. And damning. Another essay I will be printing out multiple copies to drop off in various locations… thanks for catching this and posting it.