Nearly three decades after her own brave testimony before the Senate Judiciary Committee during the confirmation hearings for U.S. Supreme Court nominee Clarence Thomas in 1991, Anita Hill on Tuesday spoke out about the allegations of sexual assault against Brett Kavanaugh and urged lawmakers not to repeat the mistakes that were made back then.

If during the course of a federal background investigation, information arises that conflicts with a candidate’s sworn statements on the application, even the most junior officer knows to continue the investigation

That being said, it is a curious Sessions Justice Department that says multiple counts of lying in sworn testimony “ does not involve any potential federal crime" for the FBI to investigate.

Hill had it right then and she has it right this time
Thomas, God what a pathetic justice.

Thomas, God what a pathetic justice.

…for whom we can thank Joe “the senator from MBNA” Biden.

Kavanaugh’s children were removed from the confirmation hearings because the “R-rated” content was inappropriate for minors.

Note that Kavanaugh’s oldest daughter is about the same age (13) as the 15-year old child that Kavanaugh attacked when he was a drunk 17-year old. (The age of consent in Maryland is 16.)

If you want to scrub the toilets and empty the trash at your local school, in many states you need a (self-funded) criminal background check. If you want to be a Supreme Court Justice, it is fine to be a child-molesting sexual predator who freely lies under oath. Go figure.

The senate R’Cons are constructing a strictly structured and limited charade to try to protect their extremist nominee…no sense of fairness or openness!

A severely rushed “hearing” this coming Monday only - McConnell sez “she will have her chance this Monday” - only the two principles to testify under oath with no other witnesses or evidence allowed apparently, a very limited time table and likely other rules to limit the possibility to reach the truth…no FBI investigation and report on the evidence and truth - the truth often takes time to find, something the Republican leadership does not want and will do anything to limit! 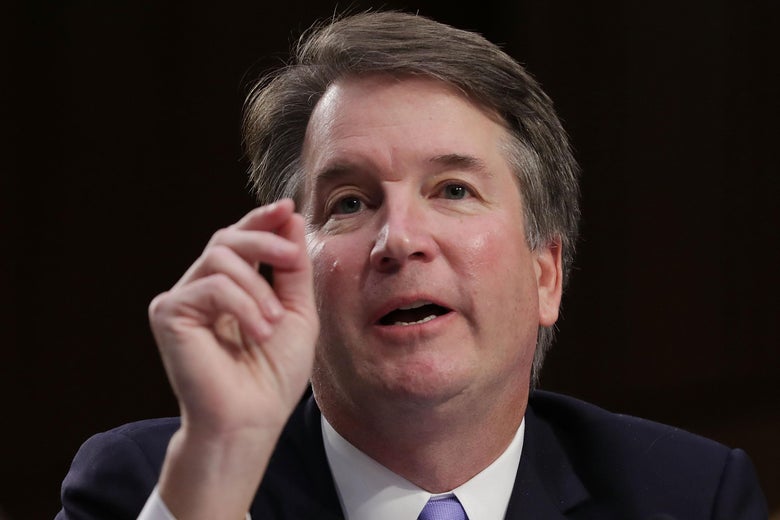 Brett Kavanaugh’s Confirmation Can’t Proceed Until His Accuser Has a Chance to...

Ford has already been “heard”. She should not have to be traumatized again by having to publicly testify at this hearing. This hearing is a total sham. It will only give Kavanaugh another chance to lie again.

I remember the Anita Hill portion of Justice Thomas’s hearing. With her parents seated behind her, Professor Hill had to go through Joe Biden’s (and the Committee’s) questions about her allegations as to the then Judge Thomas’s sexual harassment. We now know that the Justice thinks he is well-endowed, watched assorted versions of porn, and repeatedly asked Hill for dates. All through the questioning, Hill was treated as if she wasn’t being taken at all seriously, as if her accusations were a game, and it appeared that the Democrats and Republicans on the committee were kind of snickering. People seem to forget that Professor Hill was then, and is now, a Republican. A dedicated public servant, then, and a college professor now. She didn’t have any other axe to grind, except that Clarence Thomas liked to hit on women he worked with, and he also liked to demonstrate his knowledge of porn actors, their talents, and there particular physical attributes. How many other judges have sailed through similar hearings, male or female, and have witnesses with similar stories to relate? As a lifelong Democrat, it felt very unsettling to have a professional woman, a Republican, and a witness at a Senate hearing, be treated with such disrespect. It feels the same way now, as if some frat boy is having to endure a gentle kind of hazing. Judge Kavanaugh should be withdrawn unless or until a better way to conduct hearings in a 21st Century manner is decided upon.

Do we really know if Kavanaugh is, as you say, "a child molesting sexual predator; or, was this a very serious mistake made by a drunken 17 year old? I want to see a history of this type of conduct leading into the Judge’s true adult years before I would accuse him of being what you say. Otherwise, I would like to see him vetted on his legal record. Also, the Clarence Thomas - Anita Hill case is entirely different. As an aside, I feel that there are many issues by which to disqualify Kavanaugh, just not this one unless there is more than what has come out. It is a real tragedy that the Supreme Court is just a political football that brings shame, not pride, to our Nation.

There is plenty to suggest Kavanaugh is not fit for sitting in the nation’s highest Court. His lack of candor with the Judiciary Committee, multiple times, being a big one. We still do not have a full explanation of his financial matters either. However, Dr. Ford’s allegations ought to be considered among the other items.

There is zero rush aside from the political timeline Republicans have created. Have the FBI reopen their background examination of Kavanaugh while the Committee takes testimony. The only rush is a political concern, that being the November elections. That is what is making the “football.”

Attempted rape at any age is not normal male behavior, drunkened or otherwise. Normal 17 year old young men do not attempt rape under any circumstance.

Thank you Anita Hill for speaking to this. Sadly, it seems that while our Constitution appears to be changing in a negative way , many of the male attitudes have not changed at all. The 21st century---- began with warring, and it seems not just to be warring with nations.- Dueling political parties seem the most important to media stories ------Rome fell with the coming of Goths and the Vandals-----and here they come again, from our very own Congress. : (

"a child molesting sexual predator; or, was this a very serious mistake made by a drunken 17 year old?

There are numerous cases where a young person was a few weeks older than their partner, had consensual sex, and then parents got involved to force the prosecution of the older person because the magic threshold of the age of consent had been crossed. Those persons have been branded for the rest of their life as a sex offender and must register every year with the ploice. It only takes one time.

In this case, if the accusations are true, then a 17-year old man should have known better than to attempt to rape a 15-year old child. Drinking is not an excuse for rape. There is NO excuse for rape. Furthermore, the drinking age is 21. Where were the parents? Do you really want someone with this lack of judgement appointed to a lifetime job dictating the rights of all persons?

Yes, we have all done some things in our youth that we may not be proud of. But rape crosses a line that should never be crossed. Minimizing rape as just another political football demeans you.

From what we have already learned, Kavanaugh is a serial liar who has repeatedly committed perjury not only in these hearings but in his previous hearings for confirmation as a federal judge. There is no way that this man should be confirmed to the Supreme Court and instead he should be impeached from the federal judiciary.

There is no allegation, or proof of rape, just possibly at the worst attempted rape. Look, I was not there and I do not pretend to know what happened. I am merely saying that Kavanaugh needs to be vetted on other things; not something he did as a 17 year old (unless there is more to this). Did he recently lie under oath? That would be a good starter. Got Clinton, eh! I am not in any way supporting Kavanaugh as a Supreme Ct judge. I just think there are better ways to deny him that are not so hurtful to our country.

I totally agree with you. There is no need to rush this most important issue for all Americans for years to come.

My dad described Thomas perfectly: he’s dead but just hasn’t fallen over yet.

DH, if you’re implying that we should settle for Kavanaugh, you’re using “battered wife syndrome” thinking which is even worse than LOTE thinking. It’s up to wethepeople to hang on to the shreds of democracy we still have left and fight like hell every time they send a jackass to do a justice’s job. Most of us here on CD won’t shrink away from such a fight because we’re afraid things could/would get worse.

No Sieg heil for this girl…

There is no allegation, or proof of rape, just possibly at the worst attempted rape.

The laws on statutory rape between an adult and a minor do not always require actual penetration.
Attempted rape by an adult of a minor is still a very serious crime.
There are many issues with Kavanaugh, not just this one.
The question you should be asking is why are the Republicans trying to bury this and and why are they ignoring his perjury?

I think he should be exposed (sic) for each and every crime and misdemeanor he has committed in the name of truth and justice. As you note, there are many, and there is no excuse for excluding this one, if Dr. Blasey is telling the truth as appears to be the case–certainly not because to do so would be any more “hurtful to our country” than examining publicly his many other offenses.

“Finally, refer to Christine Blasey Ford by her name.”

I have been referring to her as “Dr. Blasey” because that is the name that appears on at least some of her relevant peer-reviewed articles. I would be happy to call her by any name she prefers, including “Christine Blasey Ford” if that is her preference. Ms. Hill, who is certainly an authority on this subject, does not provide any reason NOT to refer to Dr. Blasey by the name she uses professionally.

V, thanks for the Slate article. I wrote to almost all the members of the Judiciary Committee last night, but I’m going to write again to them and a couple of senators and include one of the paragraphs in the article.