As Facebook Ire Grows, Senator Says Zuckerberg 'Ought to Be Subpoenaed'

As Facebook Ire Grows, Senator Says Zuckerberg 'Ought to Be Subpoenaed'

As the damning details of Facebook's largest-ever data breach at the hands of pro-Trump data firm Cambridge Analytica continue to pour in—and as the social media giant's share price continues to plummet as a result—Sen.

The Facebook experience/trajectory is a poster child for the consideration of the precautionary principle. What bumpersticker do you want on your car when driving through any venue in which you might find yourself? Facebook is just an electronic bumper–the user chooses the stickers. Choose wisely, or like me, just safeguard your privacy by opting out (really never opting in).

Several months ago I sent an email to family members suggesting we maintain contact with each other via letters, phone calls, or emails. I specifically said that posting on social media such as FB was not what I considered communication, especially because I do not use that platform.

The next day I began receiving emails from FB inviting me to join! Apparently they were able to “mine” the content of my emails. Big Brother, anyone?

MIT Tech Review
How to manipulate Facebook and Twitter instead of letting them manipulate you
Twitter and Facebook have vast control over our online lives. Here are six ways to take it back.
by Rachel Metz March 20, 2018

This is the comment that I submitted to the NYT regarding their excellent article, “Alex Stamos, Facebook Data Security Chief, To Leave Amid Outcry” about the reasons and compromised ethics of Facebook’s posture in putting money (and EMPIRE) over principles, liberty, democracy, justice, and equality for ‘we the American people’:

By far the overwhelming advantages of “Big Data” — a term coined by the Big Blue Empire, IBM, [see Fortune magazine cover] — accrue to “Big Empire”, which is to say the current and totally unique in human history disguised global capitalist Empire nominally HQed in, and merely ‘posing’ as, our former country.

What’s the big surprise? Empire (and ‘Empire-thinking’) is nothing more than an exploitive cancer, which by design extracts valuable resources, regardless of where the inevitable ‘negative externality costs’ fall (on others) and attempts to gather all power and wealth to a smaller and smaller diseased, but disguised, core tumor until the overall society collapses.

Empires, as I have long written; grasp, exploit, accumulate, and expropriate all the ‘big tools’ of human history, such as; myth, mystery, tribe, ethnicity, race, religion, nationalism, technology, economics, ideology, etc., and employ those tools to serve Empire (and ‘Empire-thinking’ Emperors) only, until the collapse.

My only protest sign reads, “Dump Emperor Trump” on one side and “We can’t be an Empire” on the other.

And here’s the link to the NYT article: 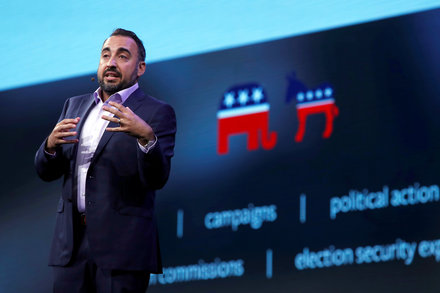 The social network was said to have reached a deal with the executive to depart after disagreements over how to address its role in spreading disinformation.

So far, among the over 1100 people who have posted comments — only one person has noted a connection to “Empire” being part of the problem — nor has the “Times” yet allowed my comment diagnosing “Empire” as being the cancerous cause of this problem to be published.

In just the past three months I have been very encouraged and pleased that the NYT has allowed almost all of my comments (over 3 dozen) to be published where I diagnose EMPIRE as the seminal causal cancer of our time and in our country.

As Trump likes to say “We’ll see” if the “Times’” courage and truth about “all the news that’s fit to print” is still in an open mood to ‘expose’ Empire, or whether the Sunlight on Empire is ‘darkening’?

“With little oversight—and no meaningful intervention from Facebook—Cambridge Analytica was able to use Facebook-developed and marketed tools to weaponize detailed psychological profiles against tens of millions of Americans,” Wyden concluded. “With this in mind, I ask that you provide further information on Facebook’s role in this incident and the overall awareness your company maintains into third-party collection and use of Facebook user data.”

“…tools to weaponize…” and just who were these tools designed for? Now “they” want to enact the “Cloud Act”, which is another weaponized tool designed for who?

We are under attack!

This Cambridge Analytica/facebook/electoral-psychological manipulation stuff (with Russians and other poor-but-tech-savvy eastern Europeans hired to provide the cheap or free labor) was being discussed by us on various blogs and sites of the non-conspiratorial, non-meme-driven left (conspiracy theories and memes being the psy-manipulators stock-in-trade) 17 months ago. And back then, the evidence was not “tens of millions” manipulated, but virtually every adult non-homeless of destitute USAn - or certainly everyone with a Facebook account - which in certainly larger than tens of millions.

Why is it only news now?

I’ve got news for you: Millennials prefer convenience to privacy.

They sign away their right to the latter quite willingly.
They actively embrace their roles as data points.
They are Faebook’s product.

The basic problem is the business model of Facebook. The company is motivated to collect as much personal information as possible and sell this personal data to advertisers, politicians, or anyone else willing to pay and all competition to Facebook is stifled because they buy up any competing ideas and they now have so much data that it puts any competitor at an extreme disadvantage. Their business model destroys privacy and trust. It is a corrupting influence on society. Facebook gathers data not only from registered users but from everyone they can. Nobody is safe unless they cut themselves off from society. While Facebook makes it easy for friends to connect it also makes it easy for neo-Nazis and other hate groups to target people with ads. Facebook is also extremely addictive and has been found to cause serious problems with depression in younger people. It appears that Facebook has become one of the leading menaces that threatens society. Congress does need to get more involved.

skee, all the annoying Facebook text messages to me about “Share with Friends”, “Look at all your requests”, etc., are answered from me to Facebook simply and consistently with the brief reply to them: FU FB

ZUCKERBERG STOLE FACEBOOK. IS THIS REALLY ANY SURPRISE? The “founder” of facebook has the morals of a thief. What’s surprising is that the boys over at Google/YouTube aren’t also being hauled in front of a grand jury to explain their collusion with Russian Oligarch’s cyber-hatchetmen.

WHAT ABOUT ROBERT MERCER’s SILENT FOUNDING PARTNER OVER AT RENAISSANCE TECHNOLOGIES? WHY NO MENTION OF THAT TAX EVADING THIEF?!?! What has he been doing lately?

AND IN HONOR OF THE ONE OR TWO MILLION DEAD IRAQIS AND AMERICAN SERVICEMEN WHOSE ANNIVERSARY OF THE SLAUGHTER IS TODAY, I WANT TO REMIND EVERYONE WHERE AND HOW IT STARTED. The Haaretz is an Israeli newsdaily based in Tel Aviv.

The war in Iraq was conceived by 25 neoconservative intellectuals, most of them Jewish, who are pushing President Bush to change the course of history. Two of them, journalists William Kristol and Charles Krauthammer, say it's possible. But another...

If it became known that Facebook was employed by our intelligence agencies, would everyone still be anxious to reveal their life stories on it?

why are you yelling? I’m not even going to read that crap because of the yelling

We don’t have an empire as the republic has yet to collapse and the current global capitalist economy is not only, not unique in history, it is also not an empire. Any re election of Trump though, will be a strong signal the end of the republic nigh and the onset of empire eminent. You can’t have an empire and republic at the same time so until the republic collapses, even though it feels like it, technically there is no empire. As long as you have choice, both in what to buy and who to govern, there is no empire, state or corporate. Vote with your pocketbook to stop corporate domination, but ignore your pocketbook when voting for governance.

From the Ha’'aretz,
“In the course of the past year, a new belief has emerged in the town: the belief in war against Iraq. That ardent faith was disseminated by a small group of 25 or 30 neoconservatives, almost all of them Jewish, almost all of them intellectuals (a partial list: Richard Perle, Paul Wolfowitz, Douglas Feith, William Kristol, Eliot Abrams, Charles Krauthammer), people who are mutual friends and cultivate one another and are convinced that political ideas are a major driving force of history.”

Estimates of Iraq War dead = 1to 2 million. They keep slamming the Catholic Kennedys for Vietnam (JFK trying to get out of VN) but for some reason the corporate mass media seems mute on the IraqWar Crime. That’s why I’m yelling.

The war in Iraq was conceived by 25 neoconservative intellectuals, most of them Jewish, who are pushing President Bush to change the course of history. Two of them, journalists William Kristol and Charles Krauthammer, say it's possible. But another...

technically there is no empire.

If having some 800 military bases in 80-100 countries around the globe doesn’t constitute an empire, the word has no meaning. And we don’t really have a republic, merely a simulacrum of one.

Cambridge Analytica is funded by Robert Mercer of Renaissance Technologies.
The founder of Renaissance Technologies, the wealthiest private equity fund on the planet Earth, is James Harris Simons , a Zionist and brilliant mathemetician, who, last I could determine owed some $6 billion in back taxes to the US government. That’s the guy behind Robert Mercer.

Just a reminder: During the fascist era in Germany 1933-1945 there were a myriad of corporations including American ones who colluded with the regime…

The military bases do not make the US an empire. They need permission from the host countries for the bases. These countries largely depend on the US for defense. The policeman of the world description is more accurate than empire. But should the US be the policeman of the world? Neither the Germans nor the Japanese want to play big military roles because of what happened in the 20th century in those countries. Those are the two countries with the largest economies that could step in to replace the US so some extent.

Robert Mercer and his wife are billionaires from all reports. They don’t seem to need anyone behind them. Is this guy James Harris Simons a white supremacist. Mercer and his wife are all about funding the white nationalist movement. Mercer has been the main source of funding for Breitbart News. He was also main source of funding for Trump’s campaign in the general election, at least during the early stages. The goal is to establish the US as a white Christian nation. It is similar to the goals of the white nationalist movements in Europe. I have never heard of Simons and as far as I know he is not playing an important role in this attempt of the white nationalists to take over the US.