As anti-occupation protests kicked off once more in Gaza on Friday just a week after Israeli soldiers massacred 17 Palestinians and injured over a thousand more, the prominent human rights group B'Tselem launched its first-ever ad campaign calling on Israeli soldiers to disobey "patently illegal" orders to shoot unarmed demonstrators.

‘“The use of live ammunition against unarmed persons who pose no danger to anyone is unlawful,” B’Tselem noted in a statement on Thursday.’

Bibi is typically unarmed, but does pose danger to over seven billion people. Food for thought.

Have the Zionists finally gone too far?

This has been their colonial project for over 100 years

Why did the dam break and what does it mean?

It happened because the left is applying all the force here, largely through social media; and the rightwing advocates are silent. Bill Kristol, Jeffrey Goldberg and Jennifer Rubin seem to have taken one look at the awful videos from Gaza and, finding the Israeli actions indefensible, turned back to Trump.

It is hugely meaningful: The American Jewish love affair with Israel is over. We are going to see more and more outright signs of the breakup in the discourse and in our politics too in coming years.

Let’s consider the dynamics first. The mainstream editorials appeared only after social media, alt web sites, and human rights groups said emphatically for several days what was plain as the nose on your face: that these were war crimes. And more important, the mainstream spoke after seeing there was no pushback from the Zionist center/right.

**Why are so many unarmed Palestinian protesters being shot and killed/wounded by Israeli forces? **

WHY are so many unarmed Americans, mostly people of color, being shot and killed by US cops?!

How many victims of US police shootings/killings can be traced directly to Israeli training? Israeli “security forces” are racist, killing Palestinians with total impunity - that racist mindset and MO is passed to US cops!

“Musta’ribeen are an elite Israeli undercover unit that disguises themselves as Arabs or Palestinians.” Based in the Palestinian Occupied Territories to kill or arrest demonstrators. Over the past two weeks, Palestinians have been protesting US President Donald Trump’s decision to recognise Jerusalem as Israel’s capital. Hundreds have been arrested by Israeli forces, and 10 people have been killed so far in the West Bank and Gaza Strip."

The AIPAC is an ostensibly US entity, a pro-Israel-at-any-cost group that subverts American politics, politicians, Congress and foreign policy, now thru the trump WH. An openly treasonous entity that serves Israeli extremism at great expense to the US in many ways!.

The extremist racist agenda of Israeli operations against Palestinians also have a very dangerous influence on US policy in training US police and actions inside the US. A supposed ally, Israel only cares about its own extremism and expansionist illegal settlements and uses the US for its own extremist purposes!. Among the trainees in the latest trip is a Washington D.C. police commander, over the objections of a D.C. city councilmember. 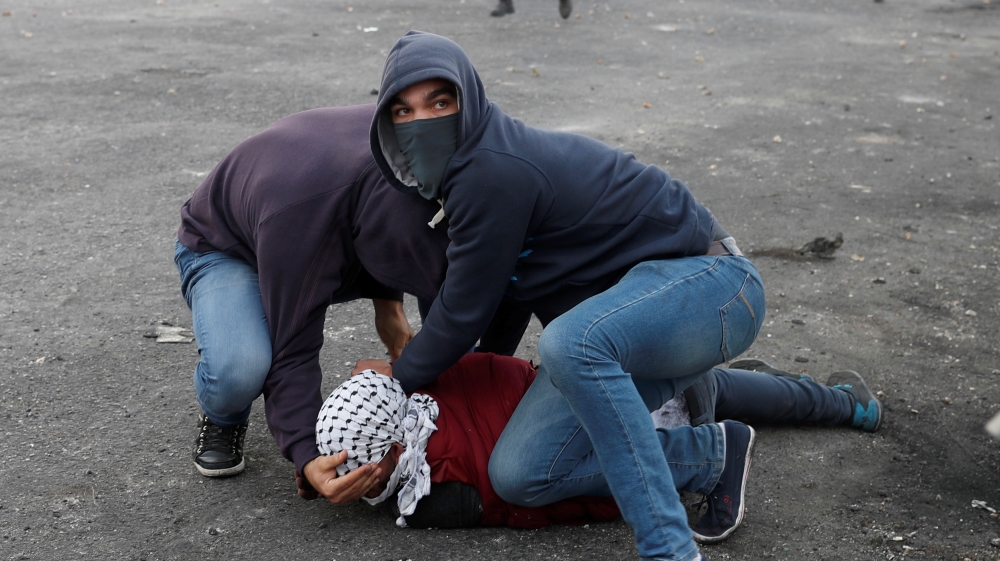 Musta'ribeen are an elite Israeli undercover unit that disguises themselves as Arabs or Palestinians.

Israel uses snipers against unarmed Palestinians - US cops use lethal forse and tactics against Americans inside the US as a direct rezsult of training US cops by Israeli security forces inside Israel!

"For 10 days in late November, police officers from New York, Miami, the Los Angeles County Sheriff’s department, the Drug Enforcement Agency and US Customs and Border Protection observed the daily operations of the Jerusalem police, the Israeli Border Police and the Shin Bet secret service, all of which play a vital role in administering Israel’s system of control over Palestinians. - some 9,500 law enforcement officials since 2004 through its Law Enforcement Exchange Program. - Since 1 October, Israeli forces have killed more than 100 Palestinians, including at least 19 children, in what human rights groups have labeled a “clear pattern” of summary executions.

" Israeli human rights group B’Tselem placed the blame squarely on Israeli Prime Minister Benjamin Netanyahu for “the transformation of police officers, and even of armed civilians, into judges and executioner.”

US cops trained to use lethal Israeli tactics

There are strong similarities between how US and Israeli police carry out executions.

From Occupation to ‘Occupy’: The Israelification of American domestic security

Israel is using rubber coated rounds hence low fatalities high injuries. But you guys can go head and fall for the pallywood acts. Israel is tough on the border because hamas uses these demonstrations to sneak jihadists into Israel and kill civilians. Hamas plans these events disguised as “peaceful demonstrations” but in reality they are intended to be violent to make Israel look bad

“…Israeli officials indicated that they are once again planning to use deadly force against nonviolent demonstrators who come within 100 meters of the border fence separating Israel and the occupied Gaza Strip.”

Just so we’re clear on this: Israel—which coyly refuses to this day to declare where its borders are—first builds another illegal fence, and then establishes, by deadly force of arms, a 100-meter buffer zone inside that fence; so, in effect, Palestine is yet again reduced in size by a settler-colonial power.

Anybody who isn’t outraged by this has lost all credibility to lecture about “human rights”—UN Ambassador Haley, take special note.

The UN is useless.

You are correct. Like the Hitler Youth, Israeli children are indoctrinated to hate the others as inferior.

I have been supportive of Israel for many years due to the horrific treatment of Jews in Germany before and during World War II, and I supported the formation of Israel. But that isn’t a blank check for Israelis to slaughter Palestinians. The other nations of the world need to give Israel the strongest possible message to not shoot unarmed protesters. That looks like the Jews (excuse the expression) turning into the Nazis they hated…

Urgent Call for American Politicians to find their Backbones and Testicles and Threaten the Israelis if the Murder and Oppression continues.

Gaza has become the Warsaw Ghetto of our time.

Judge, Jury, and Executioner is what the American and Israeli governments have enabled their Police and Military to become.

Rest assured, those responsible, will never see the Pearly Gates.

The Devil’s Spawn will be destined for Warmer Climes.

I believe the Israelis would long ago have fed the Palestinians into ovens, having been well trained by the Nazis, except for the “look” of it to the world. It would have been immediately obvious they are doing a long version of the “final solution.” Essentially, looking at Israel now, I believe it is fair to say that the Nazis won after all, that they are now instantiated solidly and implacably in the very group of people they once oppressed, the very group of people who were indeed fed to the Nazi ovens.
This “new” Israeli version of racial hatred takes longer and is a drop-at-a-time ethnic water torture but it looks as if the Israeli’s, now, because they are so close to their intended final goal (as spelled out, literally by Ben-Gurion in a 1930’s letter to his son), want to finalize it faster and faster. There is nothing good here.
Another note is that the entire Nazi era of control, from 30 January 1933 (Hitler appointed as chancellor) to the German surrender in late April/early May of 1945 was little more than a dozen years. The Nakba was around 70 years and the occupation since the war of 1967 (which I ignorantly cheered in those days) has now lasted more than half a century. Multiples longer than any third reich lasted. Perhaps Israel is the fourth reich, as irony.

True, but it’s useless because of our actions and sending Ambassadors like Haley (who I’m convinced, can’t walk and chew gum at the same time), to subvert the will of the UN.

Israel uses a troll army to spread their malignant - delusional propaganda on the world, especially the US where the “religious” extremists and right-wing politicians lap it up!

Israeli racism and violence against unarmed Palestinians is wrapped in the “we are victims only defending ourselves” BS - the big-lie repeated often and foisted on weak complicit politicians, like declaring any criticism of Israeli crimes, endless occupation and any violence/brutality as "anti-Semitism! The old lie trotted-out to cober and divert attention from crimes against humanity! Hasbara trolls are a constant blight on electronic media like CD!

https://www.commondreams.org/hambaconeggs – The Double Identity of an “Anti-Semitic” Commenter
Smearing a Progressive Website to Support Israel - the Israeli troll army is relentless in their subversion, as soon as one identity is exposed, they create another, like “Don” or “Gail” in Texas or Ohio, likely an Israeli or “settler” illegally occupying (stealing) Palestine!

A guide to dealing with Zionist trolls and their 'facts'

Once colonialism lost its lustre, Zionists adopted a Eurocentric, racist model of the nation state to deny the existence of the Palestinians

Israeli students to get $2,000 to spread state propaganda on Facebook

Israel's national students union has launched a program to pay Israeli university students $2,000 to spread pro-Israel propaganda online for 5 hours per week from the "comfort of home."

Israel needs no help to look bad, they are very capable of doing that on their own. You’re support for their awful human rights violations says a lot about what kind of person you are. Are you that brainwashed, or just a Zionist shill ? Either way, we ain’t buying what you’re selling.

Israelis love murdering innocent Palestinians. They’ve been doing it for decades with the full support of most American citizens and ALL American politicians.

This is the most effective strategy to gaining Palestinian freedom at last. All those martyred by Israeli terrorist government will become Palestinean heros soon. Israelwill be forced to concede independence to Palestine.

Your history of comments, including this one, are abominations of racism and hatred against people of color and Palestinians! You, sir or madam, are an example of evil rot to be rubbed-out!