It’s silly as well as dishonest for Pete B to equivocate and hold his/her fire pending an “analysis” as to whether or not Trump has made a well-thought out decision–about anything, let alone starting a war!

I’d tell Bernie and Warren that the differences between them worry us far less than losing the nomination to a neoliberal. I’d let the two candidates know that we will support any decision the two work out between them as to who will be the designated candidate, and hence the presumptive nominee. We simply don’t want to take a chance that the Party insiders, through some underhanded maneuver, end up nominating their neoliberal choice. Remember 2016, and remember it’s still their game and their playing field.

If we don’t pull out the plugs to stop the Democratic billionaires and corporatists, they will put in either Biden or Buttigieg, and their half measure, neoliberal solutions will fail to fire up the Democratic voters, who stay home again and Trump wins, the same way he beat Hillary. We can’t afford another neoliberal in the White House, Republican or Democrat.

CD commentator said, “the corporate Democrats make me vomit.”
Ya gotta love these people!
And I hope Bernie will show how the green New Deal will make the
morally vacuous Cold War military budgets and CIA regime change
operations obsolete.
But I agree wholeheartedly with you, Bernie’s the best world peace candidate.

The primary and then general campaigns require word-of-mouth activity to overcome corporate media dominance which would shove the likes of Biden and/or Buttigieg down our ballots. Not being a TV viewer I am unaware of the messaging that they are employing at this time. Nor those of Bernie and Liz. Somehow the older folks need to catch onto the fact that the youth are into Bernie because he is looking after them. That SHOULD play into their morality, but the CONS have them running scared with respect to Medicare, SS, etc., so they are somewhat self-absorbed at this time. Bernie needs to develop an intergenerational messaging platform that explains how his is the true moral path forward. The wankers in the DNC need to be netted whenever they appear from their hidden holes to sabotage his campaign. Centrism Sucks.

Ian, while I agree its best f Sanders/Warren figure out how to cooperate, its unknowable whether or not a progressive or a moderate has the best chance to win. While firing up the progressive base can be decisive, I live in an older white suburb dominated by traditional Democrats where Sanders or Warren will be a hard sell. I consider the moderate Obama’s two victories and Corbyn’s defeat a warning not to take leftist rhetoric on this too literally.

You worry to much. Have a little faith in Bernie and his team.

Sometimes, while trying to clear away the fog of the USA’s political and media abstractions, I think of people I met in Baghdad and Kabul and Tehran, their lives no less precious than yours or mine

Thank-you, Norm, for addressing this ugly pillar of American exceptionalism that seldom gets called what it is, namely, racism. The lives of the people in these theaters of the Empires endless wars are indeed no less precious than ours, but it is painfully obvious that belief is not the basis for the Empire’s foreign policy. Racism I expect from the Republicans, but there is no escaping this label for the Democrats who have been active participants in the Empire’s endless wars.

Obama is a Reagan Republican. Those are his own words. Biden and Buttigieg are essentially no different. To call them moderates is to accept all the tortured spin. They are corporatists. They take are taking money from powerful interests, and like Obama, they will end up doing what powerful interests want. Their kind is why Donald Trump is President. Obama’s two victories resulted in Clinton’s spectacularly consequential loss. Corbyn actually lost because he abandoned the progressive position on Brexit in favour of what so-called “moderates” desired. The cure for cancer is definitely not more cancer!

Castro’s endorsement is a signal the PTB are trying to slow down Sen. Sanders in the Southwest and West Coast. The unwinnable Old Confederate States are solidly in the backpockets of The Black Bible Belt constituency/leadership ( The Permanent Black Political Class ). His " strategery " in supporting Sen. Warren is clearly a signal the Obama/Biden/Bloomberg coalition of MIC enablers, and endless warhawkers of the MENA quagmire, greatly fear Sen. Sanders rise.
Sen. Sanders base is well known and they find Biden, whose appeal to aid their future prospects is comparable to an offer of a 4th Meal at Taco Bell, wholly lacking for a lot of obvious reasons.
We can only hope Sen. Warren’s progressive policies on healthcare, childcare, maternity leave and women/family issues are genuine enough for her to see Sen. Sanders is " there " politically and policy wise, as well.
Hope dies last, of course. " Hopey changey " Bidenspeak turned out to be a non-starter and; Buttigieg is D.O.A. after his latest display of knowing 5 languages and using them equally well, to speak out of both sides of his mouth is unsurpassed among the primary contenders.

True enough about Biden and Buttigieg, but Elizabeth Warren wouldn’t know what an internationalist and anti-imperialist foreign policy was if it reached up and bit her in the ass.

“… the gist of the responses from Biden and Buttigieg amounted to criticizing the absence of a game plan for an atrocious game that should never be played in the first place.”

“Democratic politicians willing to wink and nod at vast death and destruction, courtesy of U.S. taxpayers, equivocating while claiming that the war machinery would operate better in their hands.”

“As for Biden, in recent months his shameful war-enabling history has drawn more attention while he continues to lie about it.”

“Meanwhile, as Buttigieg gained in the polls amid a widening flood of donations from Wall Street and other bastions of wealth, he moved away from initial claims of supporting such progressive measures as Medicare for All.”

So the best strategy is to stick with the safe candidates?
That sure worked well in 2016.

Here’s a crazy thought, barry: Extend the concept of party unity beyond the notion that progressives have to fall in line behind whatever corporate sock puppet the Dems nominate. Sanders is poised to win the first two states. His momentum will pick up steam. That’s your cue to convince older white suburban voters that he’s the best chance your feeble-minded and corrupt party has to win the young, diverse, and previously non-voting coalition that can defeat Trump. Damn, barry – the voters don’t want safe!

Bernie is taking the gloves off:

"Joe Biden voted, and helped lead the effort for the war in Iraq. Joe Biden voted for the disastrous trade agreements like NAFTA and PNTR. Joe Biden has been on the floor of the Senate talking about the need to cut Social Security. Joe Biden pushed a bankruptcy bill" https://t.co/p2zdxdU3K9
2 Likes
mrsannhitts January 7, 2020, 4:51pm #15

The foreign policy of the U. S. was birthed, and is now fed, sheltered and clothed by our domestic policies. The Energy Sector, the Transportation Sector, the Manufacturing/Service Sector are all linked to our tax and investment policy. 40 years of Neo-Liberalism and Wall St. deregulation by the UniParty has brought us to the brink of catastrophes, large and small.
With a robust Green New Deal and a New Deal 2.0, mitigation of the " worst of the worst " outcomes, can still prevail. None of this is possible, however, with the continued propping up of the Failing Empire.

He’ll need to draw a link between all that and taking corporate money (otherwise Biden’s is simply Buttigieg’s gain), but i have no doubt he will get to that.

Buttigieg is dangerous and Biden doesn’t have any mental acuity left.

If Bernie wins there, he’ll win New Hampshire. After those two wins, Mayo Pete will sink.
Byedone is lying on repeat about his support for the Iraq War. He’s going to get called out.

Interesting story at The Intercept about Bernie’s ground game:

Can the Bernie Sanders Campaign Alter the Course of the Democratic Party?

The Bernie Sanders campaign is trying something new: trusting people.

Welcome my son
Welcome to the machine
Where have you been?
It’s alright we know where you’ve been

“Biden or Buttigieg, and their half measure, neoliberal solutions will fail to fire up the Democratic voters, who stay home again and Trump wins, the same way he beat Hillary.”

Yea - Biden remains popular mainly because of the false idea that he is most electable - he generates little excitement or loyalty needed to win.

The Democratic establishment and mainstream media promote it because they are against progressives; and large parts of the rank and file buy the neoliberal propaganda out of fear of Trump.

It’s not even mainly about comparing/contrasting policies anymore - it’s this disastrous idea that must be tackled head on. 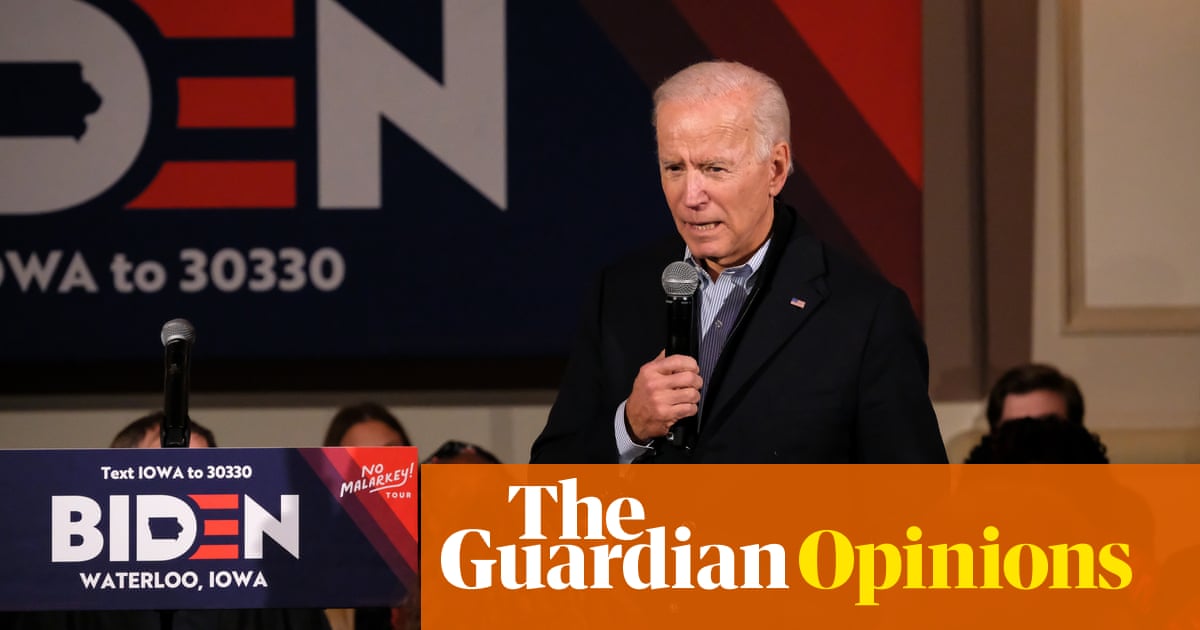 Stop saying Biden is the 'most electable'. Trump will run rings round him |...

Did we learn nothing from 2016? Trump is savagely effective at destroying establishment politicians – and Biden would lose

And Krystal Ball’s similar take (both the written summary and the more detailed newscast):