But I saw a commercial on TV wherein Amazon warehouse workers claimed they love their jobs! They “sweat” and “kick butt” and love it! That commercial wouldn’t lie to me, would it?

Here’s some more relevant press on Amazon and Bezos.

AMAZON AND JEFF BEZOS ARE EVIL. (And I almost never use my caps-lock.) 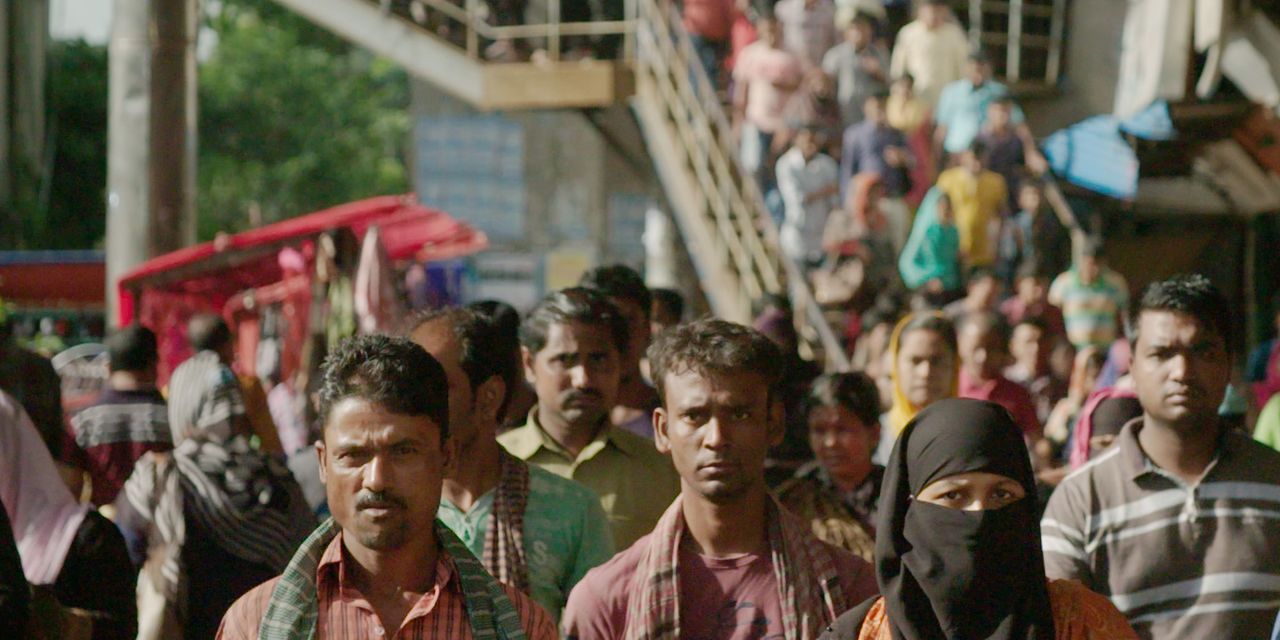 After a 2013 factory collapse killed over 1,100 in Bangladesh, most big U.S. apparel companies agreed not to sell goods from plants violating worker-safety standards. Not Amazon.

Follow up song, “Corporate welfare Polka” is hilarious and poignant too.

“The government has been outsourcing technology development to private corporations because THEY are not obligated under FOIA.
It wouldn’t surprise me if this is more of that”

Your remark here, Phred_Pharkel, is hard for me to get a handle on vis a vis Amazon’s cloud computing contract with the CIA. I’m pretty sure I misread it earlier today before leaving for work when I was rushed, but flush with trying to figure out the broader implications of a subject I’ve given little thought. Since I’m a newshound, it’d be fair to say the subject has gotten little mainstream news coverage here in the U.S. and some of the international press that I keep up with.

When a citizen like Ed Snowden goes to work for Booz Allen who contract to the NSA, are Booz Allen exempt from FOIA obligations? When I research this online that question goes off in many other directions. Such as:
https://washingtontechnology.com/articles/2017/02/17/insights-proxmire-foia-advice.aspx

Could you, Phred, specify in which direction you are thinking of the obligations of government contractors under FOIA and how that does or does not allow government agencies like the NSA to evade FOIA obligations? Also, stick to issues pertaining to the Public Interest. The whole personal liability and exemptions sought issues based on proprietary information seems useful in legal circles. However, I am primarily interested more in pursuing Amazon’s conflicted interests and the usefulness of National Security Agencies of the federal government gaining a beard in jobbing out cloud computing services.

Zuboff’s decades of formulating her anti-trust\anti-competitive angles on the dominant LLC’s shifting business models, GOOGLE, MS, AMAZON and FACEBOOK doesn’t even delve into the convolutions of government outsourcing of national security work that percolated up into the open discussions and journalistic coverage in the 1980’s of the PROMIS Software (Prosecutors Management Information System) and INSLAW affair.
https://archive.org/stream/InslawAffairInvestigativeReport/TheInslawAffair_djvu.txt

That began as a Public\Private partnership and then went full LLP profit maximizing and proliferating from private development to Israeli state security modifications with resale to client states and security apparatuses. Soon after it was alleged that some proprietary application was stolen from the Israeli state by Reagan-Bush AG Ed Meese for use in U.S. Justice Department case work. See also the peripheral death under mysterious circumstances of independent investigative journalist Danny Casolario before the whole congressional investigation culminated in the Texas Congressman Jack Brooks’s investigative report and another sideshow in the trial on separate charges of Iran\Contra and October Surprise conspiracy figure Michael Riconosciuto.

PROMIS (Prosecutors Management Information System) was a case management software developed by Inslaw (formerly the Institute for Law and Social Research), a non-profit organization established in 1973 by Bill and Nancy Hamilton. The software program was developed with aid from the Law Enforcement Assistance Administration to aid prosecutors' offices in tracking; in 1982 (by which time Inslaw became a for-profit entity) Inslaw received a $10 million contract by the Justice Department to devel Th...

In any event, Phred, please do say more on which direction the subject that today, even with the Ed Snowden and Julian Assange Wiki Leaks cases unresolved there is such curious failure to encourage public discussion even among the political class on the legal obligations of government contractors to abide by FOIA legislation and the obligations of those contractors that actually handle the processing work of FOIA requests.

the people in the US seem to be using Amazon more and more even after all the negative reports on Amazon’s labor practices and treatment of manufacturers. Is this another example of american’s when they were willing to use southeast asian sweat labor to get cheap athletic shoes or buying at Walmart when everything was imported from China? The american people as a whole do not seem conscious or loyal to workers or human rights. I think many have been brainwashed by this culture to think only of themselves. Of course that is a stupid and ultimately self-defeating way of approaching life but it pleases oligarchs like Bezos or the Walton family. America is in deep trouble and partially because of the ignorance and subservience of the average person.

Where the people in the amazon commercial real or AI? or just drugged out?

Our governments outsourced much of the voting systems in the US. Wouldn’t you think a country that valued its voting and integrity of voting would develop their own proprietary software and protect it like the treasure it should be? This country’s neo-liberal leaders sold out long ago and they don’t care. Why have people gone along with all of this?

“its price is significantly less than I can find elsewhere.” That is part of the problem. How does that price get to be significantly lower other than by cheating labor or the suppliers?

The IRS FOIA Guide describes the Freedom of Information Act (FOIA) in general and gives specific instructions for making a FOIA request, including a sample letter, an explanation of potential fees and where to file requests.

The Freedom of Information Act, 5 U.S.C. 552, provides any person the right to request access of federal agency records or information. The FOIA applies to records either created or obtained by an agency and under agency control at the time of the FOIA request. Agencies within the executive branch of the federal government, including the Executive Office of the President and independent regulatory agencies are subject to the FOIA. State governments, municipal corporations, the courts, Congress and private citizens are not subject to the FOIA.

How does that price get to be significantly lower other than by cheating labor or the suppliers?

Good question. There are a couple of ways.

When I mean significantly less, I’m not talking just a couple of dollars. I once purchased something from Amazon (for around $50.00) that was half what the one other reseller I found was asking. In that case, I believe Amazon was reselling the item at a reasonable price; whereas, the other reseller was gouging, which is not unusual.

Another time, Amazon was the only reseller I could find on the Internet, and I’m quite good at running searches using a variety of search engines. There are a few manufacturers for whom Amazon is their only reseller.

The times that I absolutely won’t purchase directly from Amazon is when it’s apparent that Amazon, as the reseller, is undercutting all other resellers on Amazon and making them lower their prices from what they are quoting elsewhere. That’s not fair. Imo, Amazon should not be allowed to undercut other resellers on its platform.

So, in this case, I have to ask myself whether a 12% ($4.55) price difference is significant enough to me to purchase directly from Amazon, who is undercutting other Amazon resellers.

The part is solid steel…not likely to be damaged during shipment, so I don’t have to worry too much about Amazon’s notoriously sloppy packaging.

However, the manufacturer’s retail price is $44.40, not including shipping and tax; so, I’m already saving money by purchasing from the lowest priced eBay reseller (An fyi that some eBay reseller gougers are as high as $66.00).

In this case, because Amazon is undercutting other Amazon resellers, I’ll spend the extra $4.55 and purchase from eBay, resting assured that the item will be well packaged and will arrive in a reasonable amount of time.

I don’t mean to be self-righteous but I don’t use Amazon. There is so much that has been written about their shady business practices with vendors and with employees. It is a monopoly that should not exist if our laws were enforced.

I would prefer not to use them, either. But, when they are the only reseller, or they’re very significantly less than another reseller, of an item that I need, I’ll purchase from them. Otherwise, I much prefer eBay, which doesn’t compete with its sellers/resellers.

Equally as important in keeping me away from Amazon, itself, as a reseller is that I’ve received so many damaged items from them due to poor packaging, I simply don’t want to invite those problems.

Yes, Ebay probably is better and I assume that more profit goes to the individual seller. I use Alibris to buy books online as it seems to be working directly with local bookstores and it is not AMAZON. It makes one wonder why companies couldn’t band together and create their own selling website instead of Amazon. Amazon has also been brought to task for the recklessness and lack of financial responsibility of some of its outsourced delivery services. Personally I have always been in favor a tariff for imported goods that would add to the cost at least the minimum wage in our country along with all related labor and environmental laws exempting those countries where those kind of things are provided. Amazon has a horrible record with vendors and they will often sell forgeries even though they are aware of it. This is not a good company and the bigger it gets the worse I think it gets for the United States.