Actually the first presidential candidate to oppose the coup and call for support for Evo Morales was Howie Hawkins who is seeking the Green Party nomination. See

We oppose the collapse of rule of law and due process that is being perpetrated by right-wingers that want to dismantle the material gains won by the indigenous people of Bolivia and of its socialists. We applaud AMLO’s offer of asylum and we hope for Evo Morales’ safety. pic.twitter.com/gJIsWZjFNS

He also tweeted from his personal page:

It isn't enough to denounce the coup against Evo Morales in Bolivia while validating the myth driving the coup.

Morales' resignation followed threats from the military and the opposition against not just him but his ministers and their family. There is an unconfirmed rumor that those leading the coup plan to kill Evo.

Morales has been undemocratically overthrown by violent forces of reaction. This is a coup d’état against the clear wishes of the Bolivian people. #GolpeDeEstadoEnBolivia

Interesting look at the situation from Bernies eyes. We don’t really have to add this to the pot when the Maduro thing hasn’t been re-adressed.
I also agree with Godless that TPTB will concede to Bernie at this point, or more likely, step up the efforts to ignore him or trash him.

The lady was way down the list in succession. Everyone ahead of her walked out, including those whose sympathies lie more with MAS.
There’s a back story; it looks like certain parties wanted a value-added development benefit, to the lithium mining agreements.
Morales got caught between a desert and a hot place initially, while potentially sitting on a lithium monopoly. 50% control to the automotive industry companies/stockholders spelled coup, in this case. The internal politics were already shakey.
Then Morales was pressured, he wanted to renegotiate…oh man, like I said, it’s a wonder he’s still alive.

Yes, It’s always about robbing the country of resources and as Indigenous people are trying to protect these resources they are the victims of horrible violence.Same old story and we (the US) have been on the wrong side from the beginning.

Somewhere I read that Senor Morales is in hiding so he is totally aware of the dangers.

Crossing the mining industry is suicide. I’ve worked on a good number of ‘sustainable energy’ projects in South America. I saw the abuse the mining industry inflicts upon indigenous communities in order to acquire indigenous land and natural resources. I reject approaches to non-carbon emitting energy generation that fail to answer questions such as, where materials come from, how they are extracted, and what are the human impacts. My sense is that the Lithium mining industry is hoping to cash in on Morales’ exit:

Companies are making billions in lithium mining. But these indigenous people...

Hunt for mineral known as ‘white gold’ intensifies in the Andes, but those who live on the land say they are being tossed aside 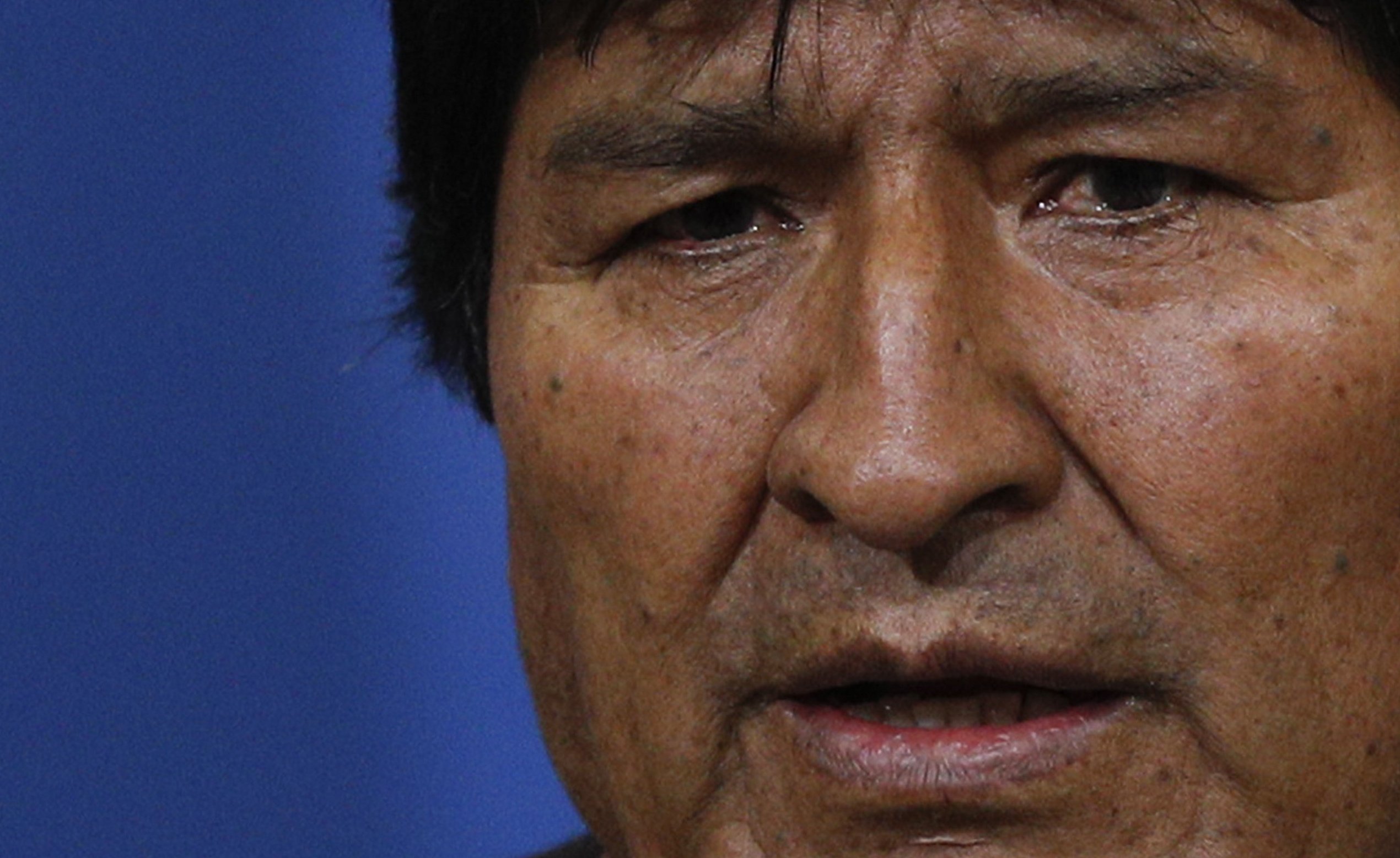 LA PAZ, Bolivia (AP) — The latest on the political crisis in Bolivia (all times local): 9:40 p.m. Former Bolivian President Evo Morales has tweeted that he is leaving Bolivia for...

Thank you once again, Senator Sanders, for continuing to speak out against injustice throughout the world. This is especially relevant when our intelligence agencies continue to undermine democratically elected governments both here and abroad. I only wish there were another 500 men and women with your same values in Congress. The corporate Democrats running the charade for the nomination should be ashamed of themselves.

When Bernie said that about Maduro he lost my vote.

Well, such incidents clearly make one at least think twice. But I tend to take the long view- what the guy has said and done over his career.

In that light, he is unique among American elected officials. No one else has demonstrated so long and consistently his combination of values, understanding, votes and persuasion - no one…perhaps ever.

Is he perfect? Absolutely not! To that point, there is not one single other person on Earth who would be as good as I think I would … or at least as I’d hope to be. In my vision (fantasy) of myself, I’d both do and say everything with sublime perfection. I’d not only change the direction of the ship of state 180°, but also persuade every other soul to reach a deeper state of consciousness so that selfishness, greed, brutality and injustice just disappeared.

Ahem… ok, back to reality…
In all seriousness, to the extent we apply single-issue (and single utterance) litmus tests to people, we’ll NEVER find anyone worthy of our vote. Nada.

Look instead at his track record, whether on voting and speaking up against bloated defense spending bills, against regime change wars, for ending existing ones, for conditioning any aid to Israel to justice for Palestinians, etc. ; or for ending corporate control over elections and policy, for ending our fossil fuel dependence and addressing climate change, etc. Not one person in any office has come even close to his leadership on these issues.

And yes, I know …there are others in other parties who would be as good. IF ONLY. Having voted for Jill Stein and Ralph Nader, I certainly understand that one can only hold one’s nose for so long in life.

But among the Dem candidates, there isn’t anyone even close - not even Warren, even tho she’s adopted much of his positions over the last couple years.

And assuming that we aren’t suddenly in the next year going to build the Green Party into an actual organization capable of winning more than 1% to 2% of the vote, I argue that we have a very small window of opportunity to elect, for the first time certainly in my 4+ decades of voting, a president who comes as close to my values and interests as is possible. And if we withhold votes because we’re disappointed by his awful “dictator” remark (and i wrote him & his staff right after it happened, to express my dismay!) or because of any other litmus test, we’ll all live to regret it.

I think EW knows a fair amount about corruption. One would like to think that her concern is now genuine. But how she would remedy it is a biq question for me. I don’t see her willing to fundamentally challenge the “markets” that she has defended her entire career.

You know the world is f***ed up when Trump calls Morales’ resignation ‘a great day for democracy’.

Beware of many who call it “democracy”.

" And if we withhold votes because we’re disappointed by his awful “dictator” remark … or because of any other litmus test, we’ll all live to regret it."
Well said RogerH! thank you

I don’t disagree with you. However, Bolivia has neither the technical skill nor the capital to take advantage. Morales runs up against the limits of " coalition populism" and its competing demands. Poorer quality lithium doesn’t help.
Something always breaks the logjam, however. In this case that logjam is still collecting more logs.
Politics is very hard work. I wish Evo good health and good luck. He’s going to need both.

Adriana Salvatierra Arriaza (born 3 June 1989) is a Bolivian politician. 81st President of Bolivia from 2019 to 2019. She was the President of the Senate of Bolivia from January 2019. In 2015, she was elected to the Senate as a member of the Movement for Socialism from the Santa Cruz Department. The entry of Adriana Salvatierra into politics dates from the year 2005, when at just 16 years old Salvatierra joined the ranks of the Movement for Socialism led by Evo Morales. In 2014, the youth organi...

People should check out Warren on Democracy Now -----Warren brings up—NOT ASKED—her number one issue on day one is corruption—and she rightly points out that the progressive agenda will never pass until this major corporate corruption is dealt with.

This has been Bernie’s message for a long time when he talks about a political revolution. He states that just getting him elected is only the beginning and that he will need help from all of us to change the corporate dominance corrupting our government. Unfortunately I am not sure of the trajectory of Warren’s ability to do so, in that unlike Sanders she has collected much corporate based funding and is capitalist to the bone. Hopefully not an illusion.

i think this is the last now of the original pink tide.

it was a noble experiment, with now only venezuela hanging on by its nails.

but the lesson is an old one: there can be no peace with capital, and there can be no genuine revolution without disposing of the existing oligarchy. It simply cannot be done.

And we need to grow up about this. Especially the pundits who keep tying our hands.

The very fact that trumpty dumpty backed Maduro, makes him png in my book - he is a fascist dictator, just like trumpty dumpty, bojo the bozo and liar bolsonaro !

Bernie well informed? Well on this one I think he is missing something. Sometime back there was a referendum about whether or not the country supported Morales running again. He lost. But he didn’t listen. …and he got greedy…So here we are. Th military may have done the best thing possible in “asking” for Morales resignation. Anyone who knows even a little bit about the country would know that Bolivians are tough folks. The blood would have flowed in the streets if Morales hadn’t backed out. As one protester put it “He could have left by the front door if he had wanted to.”

Morales has done some good things for the country but he got in with some heavy company (Notably Ortega, Chavez, and Castro) and lost his way in my opinion. He never has been a tough guy. Doesn’t have the background. Always struck me as a little boy who was led astray by the older boys. It’s too bad these politicians of all brand names don’t understand that it is they who serve the people. Not the reverse.