Just to be clear: the "blue wave" is coming.

No, the "blue tidal wave" is not coming.

Actually, the "blue wave" might be coming, but it's a question mark.

Bernie, I suggest you change “their donor base” to “their client base”.

This paper analyses the impact of direct democracy on tax morale in Switzerland, a country where participation rights strongly vary across different c…

The power center of the Democratic Party e.g., Corporate State Democrats, DCCC, DLC, and think tankers No Labels, and Correct the Record, would not consider Republicans keeping control of the House a loss. They get more tax cuts out of it, and they get to continue this charade while they keep their elite world of power, money, expensive dinners, and public huge iPhone noodling in tact.

That’s kind of what this whole existing oligarchy thing is about.

Bernie Sanders is pushing his agenda by claiming that the establishment Democrats can’t win with theirs. Why not that use that strategy to push an agenda. Maybe Sander is right. And, maybe he isn’t. In many races the type of Democrat who will run against a Republican will be determined in Democratic primaries. In other words, the people who vote the primary will determine what type of Democratic will run in the general election.

Bernie Sanders is pushing his agenda by claiming that the establishment Democrats can’t win with theirs. Why not that use that strategy to push an agenda.

New flash! Bernie is pushing a (from a centrist Dem’s, like you apparently, viewpoint) radically progressive agenda, although I’d call it common sense. He’s only making a factual observation that Democrats can’t win with their willy-nilly, “Oh dear!, don’t offend me or the establishment political structure with your progressive positions” strategy.

My guess is that if the Democrats manage to blow it again, which is looking ever more likely to happen, the progressives are likely to reorganize into a real third party – at that point you’ll have to decide if you want to be a rump party (pun intended) or just join forces with Republicans to maintain the corrupt status quo and thereby admit what we all know is true (that there’s no real difference between corporate Democrats and Republicans). I’m guessing from your history here that you’ll vote for the latter.

I, for one, remain hopeful, if not optimistic that the Democratic Party can at least wrest control of the House from Republicans, although the more important Senate is probably beyond their grasp. The damage that another two years of Republican Senate control cannot be overstated. Meanwhile, you and your ilk continue to fiddle about (think Nero here) your angst over progressive positions. Your days are numbered, one way or another. Progressives are on the rise and you and your friends are on the decline. The real question is whether we can take control before it’s too late for us and the planet. My guess is that it’s already too late for you.

“In other words, the people who vote the primary will determine what type of Democratic will run in the general election.”

That is besides superdelegates and those who are excluded by voter purges and other primary voter suppression techniques and the pervasive media bias on display in 2016.

Since you are in favor of closed primaries, you want only Democrats to determine who that person will be. I want Democrats to have open primaries and actively court the independent vote (some of which are more progressive, some leaning towards a Republican view, but not actually in the party). So it could be that the Democrat who is best positioned to win a primary is more corporatist but that candidate is actually less likely to get out enough people to win in the general.

Also, I agree with others - your saying Bernie isn’t pushing his agenda or should spend his time pushing it instead of critiquing the Democrats is strange to say the lest. Say what you want about Bernie (and many don’t like him in the progressive side even - whether for his support of Clinton, or the F-35 basing, or something else), but he is very straightforward about the change he is advocating for - much more I would say than the Democrats overall.

I guess you haven’t been following the primaries. Establishment Dems have been rigging them by supporting only their corporate candidates. It’s not as if Progressives have a fair chance. That’s why the Dems will lose again. The lesser of two evils will no longer work. Take people’s true choice away and they won’t reward you with a ‘win’.

“We cannot defeat Trump and the Republican Party with the same playbook, or by supporting the same kind of candidates long favored by the political establishment and financial elite. That is how we got to where we are today.” —Sen. Bernie Sanders

Bernie,If you really believe that statement, then why did you support the political establishment and financial elite candidate in the last election?

I guess you prefer people who don’t keep their word and pledges. " Damned if you don’t, damned if you do " but the price of admission was worth it for Sen. Sanders.
And, how would you like to be sitting in a Sen. McCaskill’s hot seat, running in a state which Bernie almost won in 2016? Or, Manchin where he got 70% of the Democratic vote in a state that went Trump bigly in 2016?
Sen. Sanders has shaken it up without a ton of $$$, and besides, he launched several splinter progressive groups which are not DCCC or DSCC lapdogs.

I, for one, will not be voting for any more neoliberal DNC candidates like Hillary. We can either have progressives running or let the damn Republicans continue their rampage on our nation until there’s nothing left for the corporate elites to divie up. Then perhaps they will get the message, when the revolution is under way. Enough is enough!

Their “faux Progressives” in control, or Republicans destroying everything and tens of thousands of people dying.

Berners have been QUITE clear that they will sell out America for power.

Yeah, here’s the problems with your statement.

First, Bernie Sanders IS a member of the Establishment.

He made a million dollars last year, which officially makes him a member of the 1%.

Second, Hillary Clinton isn’t “too close to Wall Street”, That was a smear attack.

She wasn’t the “financial elite Candidate” , she was the Candidate of the People.

She was born Middle Class and worked a LONG TIME to climb the ladder of success.

She’s famous for a lifetime of helping women and children.

He ATTACKED her with Slander, dragged the fight to the Convention even though he was outvoted by 3.8 million votes, and then did nothing to convince his supporters to vote for the Nominee.

The oddity is that the alt-Left attacks Sanders as if he could have OVERTHROWN the voters and stolen the Nomination.

Edit to “Bernie Sanders is pushing his Socialist Agenda”.

The trouble is, his fake “Progressives” LOSE.

Of course, Berners don’t have much use for the Truth.

They enjoy character assassination and hoaxes too much.

It seems obvious where the DINO corporate party if going, driven by the sellout “centrist” wing, and that’s to more candidates that do little to inspire or actually change much at all. Witness the “run Joe Biden up the flagpole” and see how he is greeted…more fluff and complicity, little real change.

Here’s another of those BS articles pushing Biden as the 2020 candidate that should lead to a tidal wave of outrage and opposition, but will hardly be a trickle…A “safe” candidate for the “middle”. Gotta attract those trump voters ya know…face it, the DP is the party of rot and craven complicity…

The DINO Party cannot change the current corrupt destructive dynamic by being complicit to it. The real question is - will Bernie Sanders do what needs to be done even if it doesn’t lead to a presidential victory for real progressive change for the Common Good? 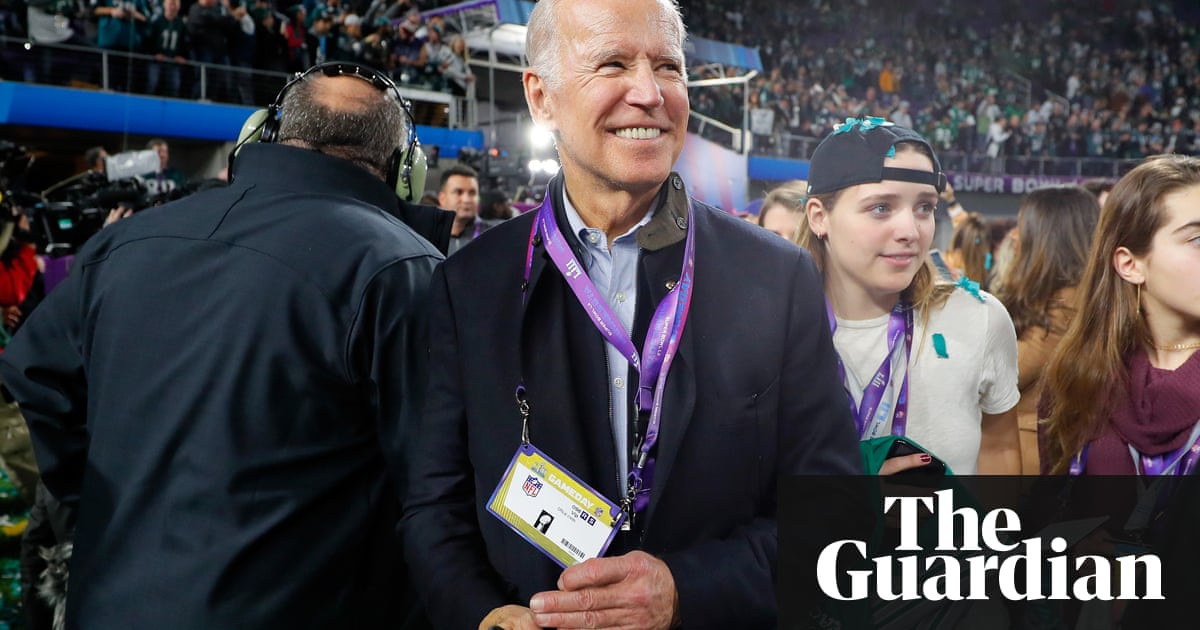 Joe Biden: the liberal everyman spoiling for a fight with Trump as 2020 looms

The voters play a role, right? It seems like the pattern I see around here is when the most progressive candidate loses a primary or general, it’s the DCCC, DNC, corporatists, or some such nefarious organization at fault. When a progressive wins, it proves our priors, the people rose up to do everyone justice against neoliberals, etc.

Sometimes though, explanations are more banal. Candidates that win are just more likable, whether progressive or center-left, or have better name recognition. In my district, the person that came closest to beating my teapublican congressman was a local sheriff, popularly elected, with name recognition. He came within 1000 votes of winning and I have little doubt the fact he was known already played a big role in him coming closer than anyone has in a long time.

We nominated a very progressive, but unknown local doctor in 2016, and he got trashed. Nice guy, Bernie supporter, but went down in flames. I just do not think he had the name recognition, let alone political record, to compete.

Sen. Sanders has shaken it up without a ton of $$$, and besides, he launched several splinter progressive groups which are not DCCC or DSCC lapdogs.

You make some good points.

Dude, with untruths like you just riddled off, all we need to do is point them out and you have effectively assassinated your own character.

Where’s your proof?! Your bullshit isn’t true just because you say it is. Consider all your points rebuked with nothing but my say so!

Oh, and Bernie’s messsge is not diminished because in one year he made a million dollars due to a book advance. The Clintons are fully within the 1%, and that makes her worse, because with you it’s obviously about the magnitude, eh?! Also, Bernie’s income is not perpetual and is totally irrelevant to his 40+ year history fighting for equal rights for people of color!

Second, the flawed HRC WAS super cozy with wall street! She gave speeches to them about how two faced she intended to be and then tried to claim victimhood, the bitch. I don’t need her kind of representation, or your revisionist history! Your criteria must be that she has to have an office on Wall Street to be an insider? OK, how about this: she’s a board member of Walmart, who pays so little to their workers they qualify for food stamps!

What class you’re borne into doesn’t matter one bit when you turn your back on them and fight for the oligarchs because you want to be one!

What reall chaps my ass about you, William Carr, is your literary excrement that Bernie didn’t support her?! Really you detestable excuse for a revisionist historian (ok, human)? Thats what turned so many off in that election, that he didn’t support her? No, quite the contrary, his support for her kept enough people home or voting an alternative that wasn’t tweedle dumb or tweedle dumber.

You are a wacked out lying piece of shit!

I am in complete agreement that name recognition is a big force in politics. And I realize the more progressive candidate can lose - sometimes in the primary, sometimes in the general. It doesn’t change my position that Democrats could win more overall by shedding the corrupt corporate influenced positions that too many of them hold now for a more populist, progressive, and open platform that is discussed 75% of the time (an the other 25% they can complain about what the other side does wrong which we agree is plenty).

I don’t see anything in your comment that opposes my feeling on open primaries or at least semi-closed (only open to Democrats and non party affiliated) and never closed (Democrats only). Superdelages have to go too.