Let’s be clear here, 1 contractor was killed in an attack being blamed on Iran (no proof and denials), but over 50 were killed in the strike (and unknown damage in American dollars resulted in the strike) while another 60 plus were injured. Seems excessive but that’s what the US has done over and over, and well, over. In this case, the strike was illegal as the US is an occupier (now illegal) and the group attacked once an ally is now an enemy (much like the US has done to the Kurds). The US is illegally occupying Syrian oil fields and doing deals with US Big Oil to take the oil. The US is funding Saudis war on Yemen killing thousands by munitions, bombs and missiles so when all of this is taken into consideration, the US has gone totally rogue and outlaw. The US involves itself in the business of other countries (regime change) all the time and has for decades but yet it is not okay for another country to come to their aid militarily or financially. What is wrong with this photo? It is way past time for our allies (all those who used to be), the UN, to declare the US is a threat to world stabilization, an Imperialist country who cares nothing about sovereignty, international law,or the rule of law, and declare war on the US. It’s only fair as the US under Agent Orange has declared economic and military war on all of them. That mushroom cloud they all fear, talk about, the midnight clock hands, well, that’s the US and the US is that cloud of destruction. It’s way past time to force the US out of the Mid East, the South Pacific, South America, and the African belt. Stop bending the knee to the US. Form that alliance with China, Russia, all the others and stop depending on the US. It is clear by now, the US needs all of them far more than they need us. Grow up. 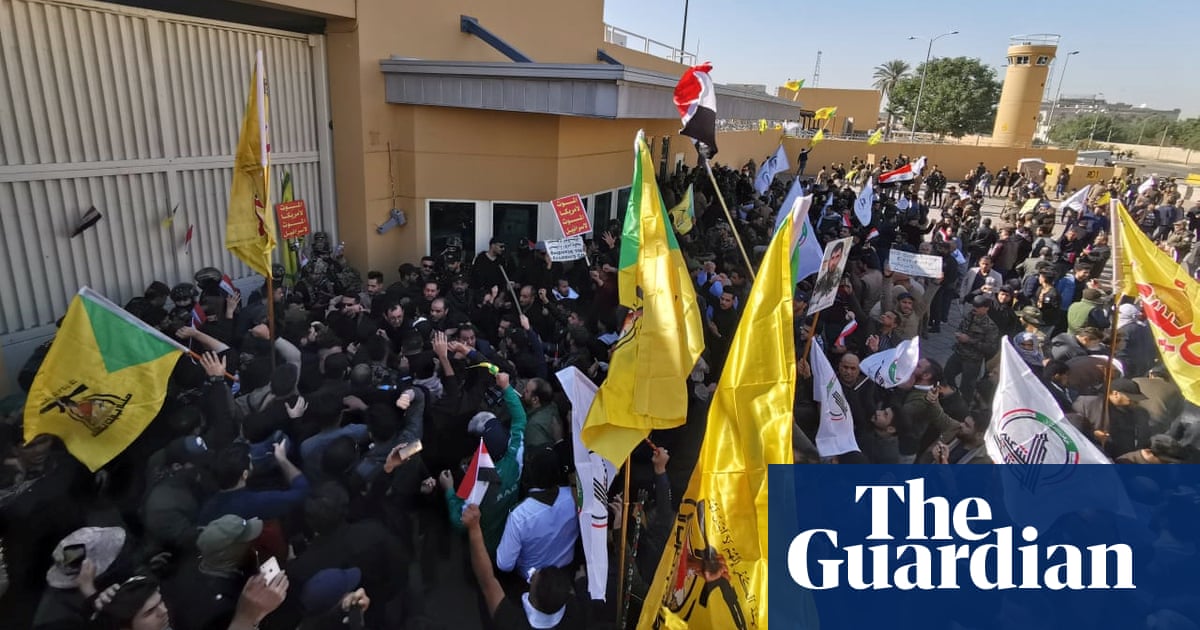 US embassy stormed in Baghdad amid anger at airstrikes

So much for the propaganda at the beginning: the war will only be six months, costs of 50 million dollars, and they will pay for it with their oil profits. Shock and awe has enveloped us all.
The desperate exodus from the rooftop of Saigon’s hotel comes to mind.

Zbigniew Brzezinski’s (1997) The Grand Chessboard fairly clearly laid out the US strategy for the ME. Prevent any consolidation of power into that which could challenge U$ “national interests”, which was probably code for OIL. The events we’ve seen from Iraq to Syria, to Libya, to fill in the blank are all consistent with the plan. Perpetual aim at Iran should be included. History is rarely accidental.

In a just world, millions of Americans would be surrounding Washington DC demanding the US military cease killing people that defeated US ally, ISIS. That sounds redundant?

I assume the news is fast changing but I am not watching, but I sincerely hope this becomes a hostage style siege and just maybe that will turn the ride of american imperialism in the Middle East…
Now that we have all stopped laughing about that I am serious… This is what is needed - for the countries we occupy or destabilize or otherwise completely violate the sovereignty of… to fight back. Constantly.
Frankly I hope China and Russia get covertly involved to support them In that. Whatever it takes to make the US STOP…to make our involvement a price we cannot afford…economically or politically.
A pipe dream to start a new year…

What’s wrong with these Iraqis? Didn’t Donald Rumsfeld make it clear that their role was to “greet us as liberators” and cheerfully pump our oil? Some thanks we get after all we’ve done…

And then there is this:

Berlin and Brussels have criticized White House sanctions against companies involved in building a Russian natural gas pipeline to Germany. They accused President Trump of interfering in national and bloc sovereignty.

A new YouGov poll has found that a majority of Germans are in favor of reducing reliance on the US and increasing ties with Russia. Chancellor Angela Merkel has said Germany cannot defend itself alone.

China signs defence agreement with South Korea as US angers Seoul with demand...

The defence ministers of South Korea and China have agreed to develop their security ties to ensure stability in north-east Asia, the latest indication that Washington’s long-standing alliances in the region are fraying.  On the sidelines of...

Trump is probably watching “Wag the Dog” and planning for revenge against Iran as we speak.

Top Bolivian coup plotters trained by US military’s School of the...

Commanders of Bolivia's military and police helped plot the coup and guaranteed its success. They were previously educated for insurrection in the US government's notorious School of the Americas and FBI training programs. By Jeb Sprague Lee

trump is a fucking monster, and a huge threat to the United States and the world, and now, he wants to go to russia, to hang out with his buddy(master?) putin to watch the huge military May day parade. This is too weird even for parody. Good, innocent people die and those like trump, putin, erdogen, duerte, jong un, the saudimasters, bolsanaro live. Whats wrong with that scenario, other than everything!

So, was all this nonsense about Impeachment just an attempt to get Trump to start a war with Iran and continue the Neocon plan of taking out one country at a time in the Mid East?

It is way past time for our allies (all those who used to be), the UN, to declare the US is a threat to world stabilization, an Imperialist country who cares nothing about sovereignty, international law,or the rule of law, and declare war on the US.

Nothing would please Donald Trump more. Trump, and US imperialism has to be stopped from the inside, by filling the streets.

In a just world, millions of Americans would be surrounding Washington DC demanding the US military cease killing people

That is not going to happen when half of the country suffers from Trump Derangement Syndrome. It’s sad to see that Common Dreams has been infected.

I am sick and tired of these two lunatics getting all bent out of shape over embassy protests. When the Venezuelan embassy was besieged in Washington DC, the State Department and the cops gave assistance to Guadisto fascists surrounding the place, and eventually stormed inside and arrested the Embassy Protection Collective. Of course they cut off water and electricity as well. And in Bolivia, we hear not a peep of protest from State Department as the fascists storm the the Mexican Embassy in La Paz