The Democratic Party establishment has shown itself time and again to be an enemy of left-wing policies. Despite her progressive plans, Elizabeth Warren is cozying up to those Democratic elites. Bernie Sanders welcomes their hatred.

Agree with you –
and I wouldn’t argue with a Sanders/Warren ticket, though I don’t have the
confidence in her so many do.

Just as PS on the comment you replied to – we not only need to TAX the RICH …
we need to STOP taxing the poor. That is that we need a higher level of exemptions
from any taxes whatsoever. Granted, they loved doing that because it was a larger base
for taxing which they took advantage of. Raising even pennies from the poor is worthwhile
for them.

I a while ago we arrived at the point where “All’s fair” in politics, whether it truly is or not.
I’m not putting Warren down at all.
If she wants the grassroots, heart of the party, she has to attach to most of what Bernie supports.
A splitting up of the grassroots voters could be a bad thing though, or cause doubt for the voters, or both.

Beside having a massively “urge-to-slap” face Zuckerberg infamously called the people who signed up for his FB pathetic suckers (not exact, just remembed the gist) which tells you a lot about his real attitude and what an all-time jerk he is. And now he is about to launch his own currency. Cripe.
And yes, break them up. Hell disband them and turn them into a public utility, as that is the mode they are operating as anyway and the niche they’ve wangled for themselves.

“…and the band is going home, it’s raining hammers, it’s raining nails / and he knows there’s nothing left for him down here. / And it’s time, time time…” - Tom Waits

October 5th marks one year off of Facebook for me. It’s time, folks. Do it for the revolution.

Yes, I agree wholeheartedly but in lieu of that if it doesn’t happen I will be more than happy to settle for breaking up Big Tech. And seeing the Zuck squirm would be sweet. (And yes I do use FB… to keep in touch with all the nieces and nephews and friend scattered across the globe.it works for me because that’s what the fam uses and is not interested in switching to other things… )

“we care about our country”

If you get busted up, you have no one to blame but yourself. And there are still antitrust laws on the books against monopolies and their practice of using their power in one area to screw people over in another.

It’s interesting. I’ve had to go to right wing sites too to try to see what’s going on (in my case, with the whole Trump/Ukraine/Biden/Crowdstrike issue).

What I want to know is, what about big telecom? It’s ATT, Verizon & Comcast who have taken Net Neutrality away from us:

'Be Ready to Fight Like Hell,' Say Internet Defenders as Court Upholds FCC...

"Big Cable's lobbyists will use this as an excuse to swarm Washington, D.C. The internet must come together once more to beat back corruption and defend our online freedom."

Warren was hired by Hillary Clinton and Barack Obama to do the bidding of the Too-Big-To-Fail (TBTF) banks.

The same thing happened with the creation of the Consumer Financial Protection Bureau (CFPB) to report into the private “Federal Reserve” owned by the same TBTF banks it purports to regulate. Pure regulatory capture. The Fed waited until the Trump administration to cut the legs out from under the CFPB by cutting its budget.

There were complaints this could happen when Warren was creating the CFPB but she ignored them and listened to the Citibank overlords who dictated Obama’s economic team. Warren was also the head of the TARP oversight committee which made sure no bankers were fired and they all got their bonuses.

Bad legislative track record makes me not trust her involvement in major regulation of social media.

In general social media has been a great way for intelligent Americans to bypass TV pundits and the mainstream media biases.

The worst thing that could happen is Warren promises to break up “Big Tech” and then turns around and regulates free speech on social media resulting in more censorship under the banner of “getting rid of fake news”.

She was born and raised Republican who generally look for a story they can all stick to.

In other words, bringing back George Orwell’s 1984.

No. Absolutely not. We need to break them up. Government in control of the net is as dangerous as anything else. Our focus has to be on decentralized platforms. Facebook & Twitter ==> the Fediverse (Mastodon, Friendica, Hubzilla, etc.) We need multiple platforms that can communicate, that are easy to install on one’s own server, and which allow you to download you data and easily more it to another server if that’s what you want to do.

For services more broadly, you can start by to these radical servers.

This is what is threatened by our loss of Net Neutrality. They will prioritize certain services (whether Facebook’s and Google’s or the nationalized version thereof) at the expense of those from small providers. And the wonder of the internet is, it’s easy for anyone to be a provider (as long as their capacity to broadcast on the net is not throttled).

The worst thing that could happen is Warren promises to break up “Big Tech” and then turns around and regulates free speech on social media resulting in more censorship under the banner of “getting rid of fake news”.

The same thing happened with the creation of the Consumer Financial Protection Bureau (CFPB) to report into the private “Federal Reserve” owned by the same TBTF banks it purports to regulate. Pure regulatory capture. The Fed waited until the Trump administration to cut the legs out from under the CFPB by cutting its budget.

There were complaints this could happen when Warren was creating the CFPB but she ignored them and listened to the Citibank overlords who dictated Obama’s economic team. Warren was also the head of the TARP oversight committee which made sure no bankers were fired and they all got their bonuses.

If you have more I can read on this, I’d appreciate it. I need some ammunition in talking to Warren supporters.

We are in trouble when Sanders and Warren are competing with Trump for totalitarian diktats most totally barren of substance as well as constitutionality.

Give some examples and demonstrate that they are “barren of substance”. Throw out a few issues, show how authoritarian they are (as if the continuous move to the right since Reagan has strengthened democracy and made the system less corrupt), and then demonstrate how barren of substance they are. Also, give some ideas of what you think would be better. Oh, and use your brain. Like, I don’t need Hayek and Rothbard bumper stickers. If I want mindless and a-historic silliness, I know where to find Reason magazine or some other rag that billionaires fund to fill people’s heads with nonsense. I seem to remember, when I tortured myself by going into economics, my professors talking about the evils of monopolies and oligopolies, and they weren’t teaching us Das Capital, but maybe in some magical universe they aren’t an issue. Thanks.

Warren: “Capitalist to my bones” Warren to split Progressive vote and allow Biden to Win the Primary

If she truly supports the MFA/GND/FC agenda, why run against Sanders and split the vote? 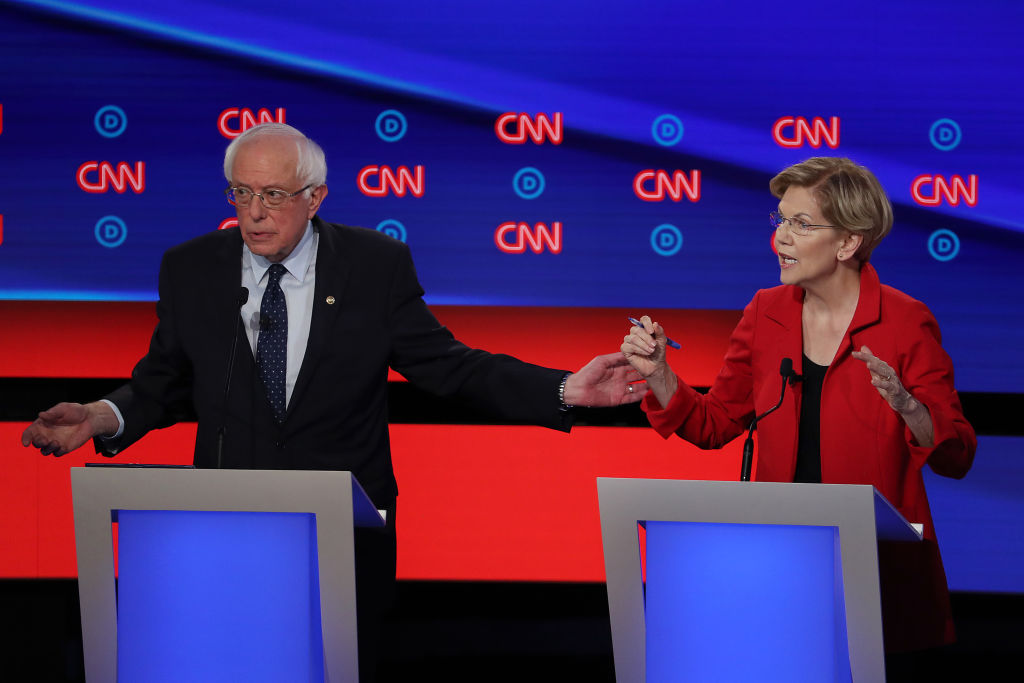 The Democratic Party establishment has shown itself time and again to be an enemy of left-wing policies. Despite her progressive plans, Elizabeth Warren is cozying up to those Democratic elites. Bernie Sanders welcomes their hatred. 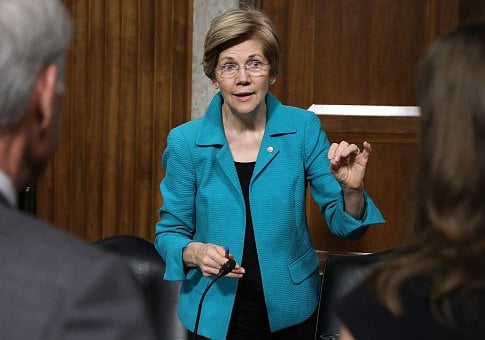 Capitalist Elizabeth Warren has the right antidote to socialism and Trumpism

Sen. Elizabeth Warren's recent remark that she is a "capitalist to my bones" is being treated as some kind of news, even though it is consistent with the policies and rhetoric the liberal Massachusetts senator has espoused for her entire career. 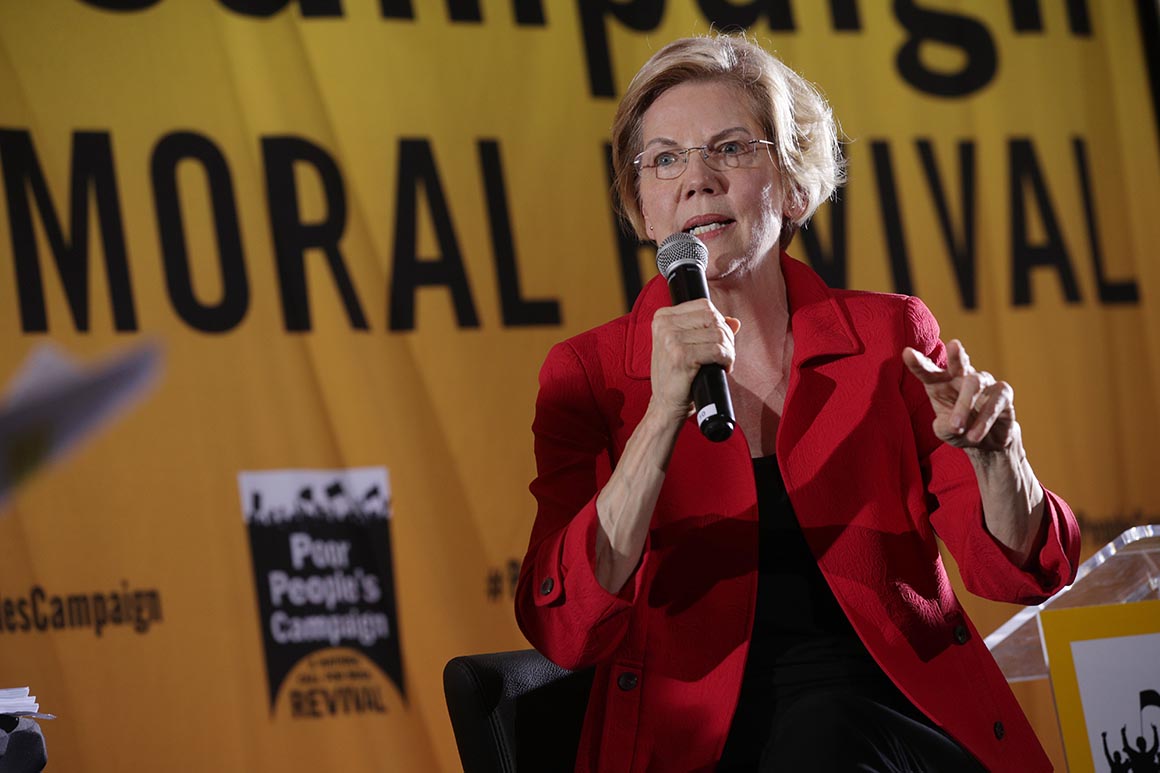 Centrists who once said the senator would lead the party to ruin are coming around to her as an alternative to Bernie Sanders.

Elizabeth Warren’s Campaign Turned To A Big Donor To Pay For The DNC Voter...

A campaign aide said Warren didn’t solicit the money herself and that there was no violation of her promise to abstain from pay-for-access fundraising.

DNA is irrelevant — Elizabeth Warren is simply not Cherokee

It is now has made it far easier to portray Warren as a phony: She appropriated Native American heritage for years.

Warren is bending to Insiders https://www.youtube.com/watch?v=G96MpnYv56E

she is very different in a conversation than when she’s on the stump https://medium.com/@SuperSovietBox/elizabeth-warren-is-not-bernie-with-a-vagina-457f0a93248 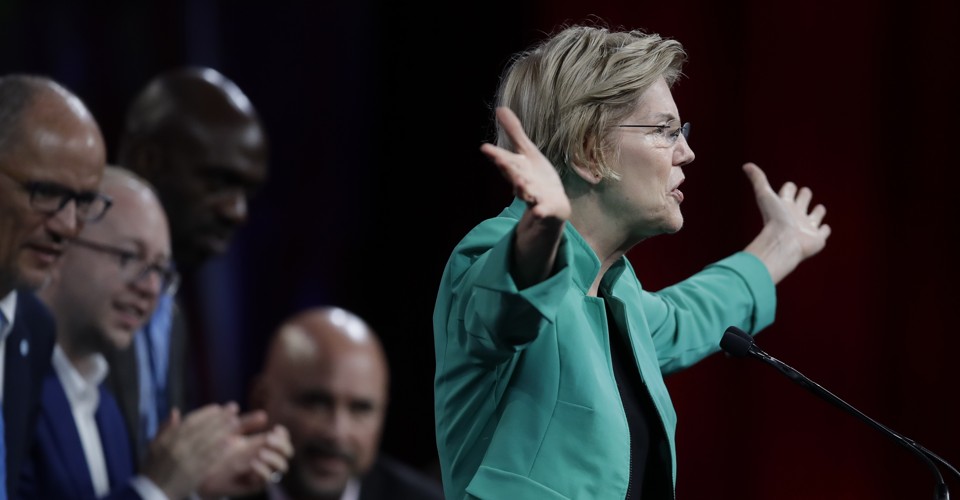 The party insiders at the DNC’s summer meeting seemed unexpectedly drawn to the senator from Massachusetts. Warren and Clinton talk behind the scenes as 2020 race intensifies

Analysis: Neither camp wants to talk about it, but the two women have recently grown closer.

The Hill - Warren circles back to Clinton https://www.youtube.com/watch?v=ds1u_zTkHuM

Warren Punking America on Medicare For All https://www.youtube.com/watch?v=7HwhTWO1-tw

Why didn’t the Winklevoss Bros create their own Facebook when there was still a chance?

Boycotts can be difficult, I understand. And Facebook is baited with your own friends and relatives. Lucky for me, I have their telephone numbers and their e-mail addresses. I don’t know how we can have a revolution if we can’t let go of something as trivial as Facebook.

Ok, I had seen a couple of those, but this is much more than I had explored. I thank you for all the work. I’ll read it all.

If you have the right one, I’ll look at that, too!)

Webwalk I like lots of what you have to say here because PUBLIC OWNERSHIP is the issue. However, fighting Capital appears to TAKE an equal amount of Capital unless and until Citizens United is eviscerated, decapitated and decaying in the ground.

Zuckerberg likes to put out a benign face to the public but when you hear what is going on behind the facade…it is ugly.