I’ve had a crack at some new fire danger signs for ya @ScottMorrisonMP #nswisburning #auspol #HowGoodisHawaii https://t.co/TohanjZPtr 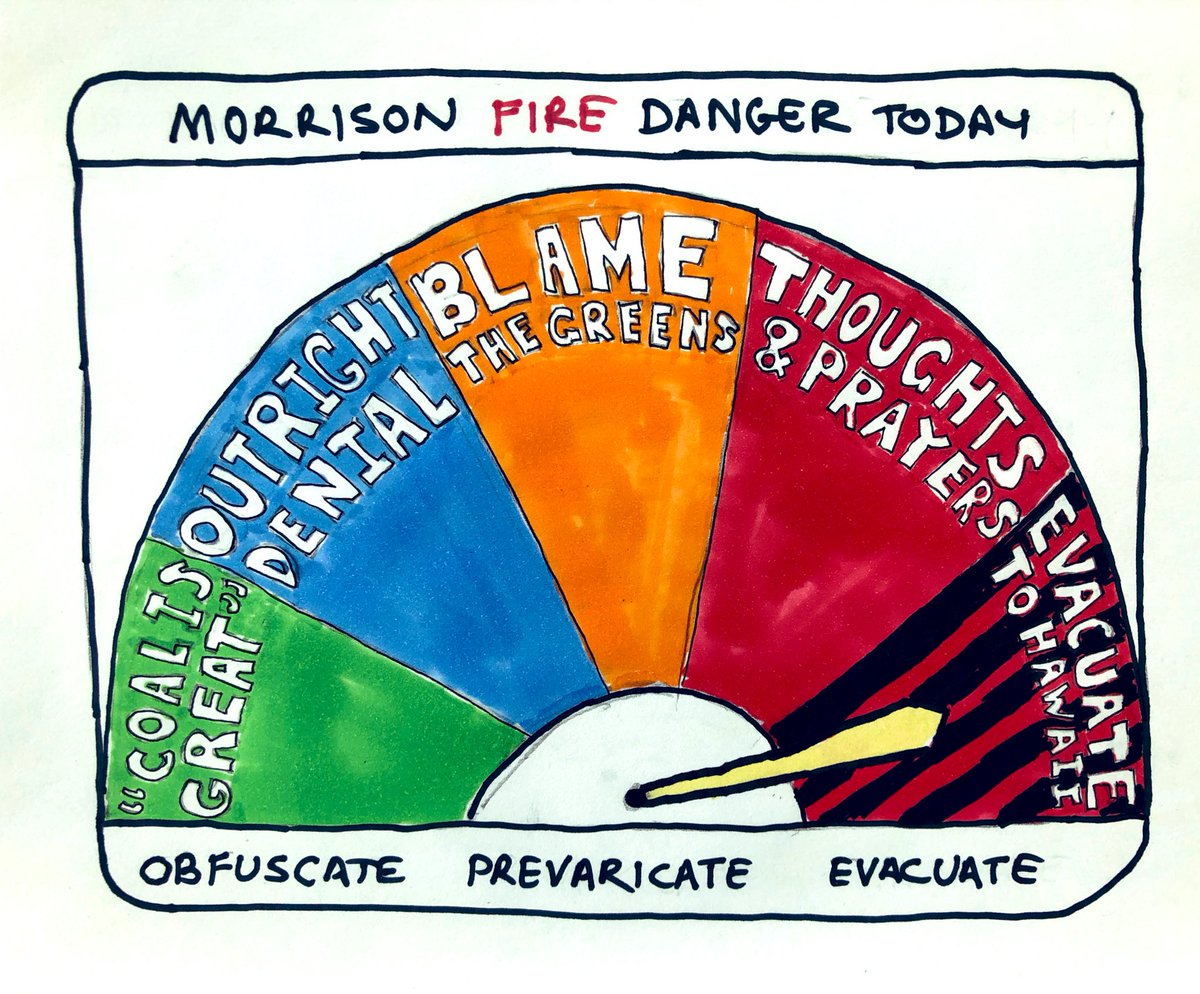 Good for you lol

Burning down the glut of over priced, over built real estate?

It’s very intense. The Donald Pleasance character is a study in debauchery. The kangaroo slaughtering scene is awful, though. And it goes on and on for about 15 minutes.

They will continue to burn, while we will pray for them. Sounds like Hellfire for the Evangels. You Ausssies always had a “spotted” heritage, didn’t Ya?

I’ll skip that. Thanks for the warning.

The Australian teens fight back: 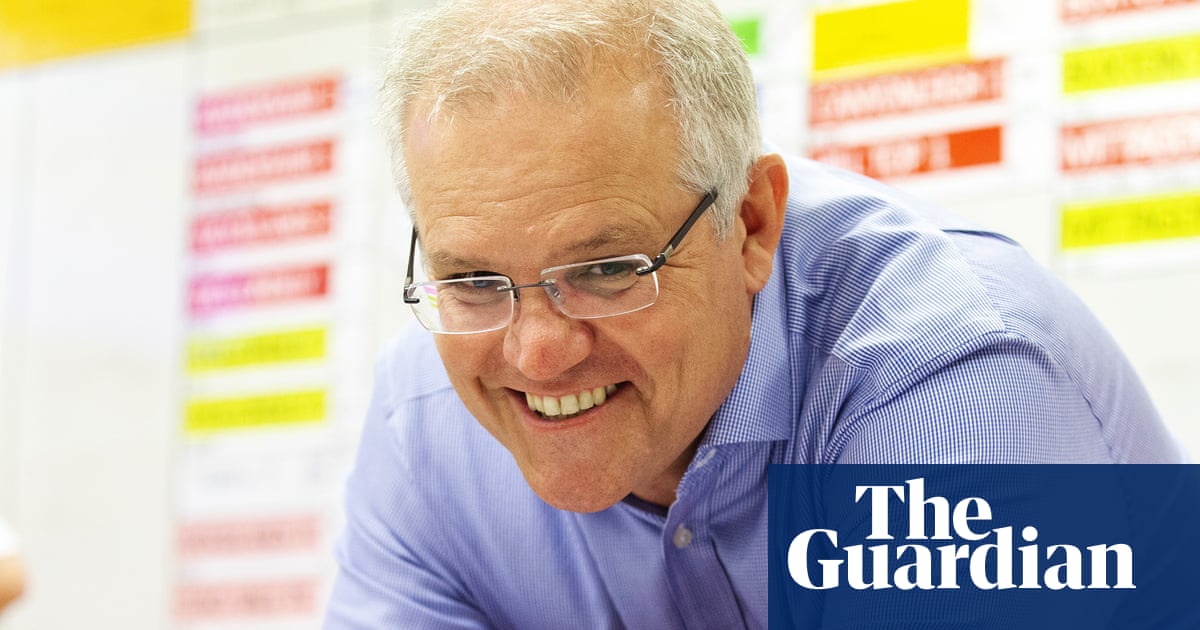 Australian teens turn to TikTok to mock PM over Hawaii holiday during fire...

Yes, but at the same time, nobody wants to go back to living in tipis and wigwams. Capitalism could still be a useful tool going forward. The real problem is that we’ve decided it’s all but the only tool, and that it should be worshiped.

Capitalism in no way shape or firm means that without it we must live in wigwams.

Capitalism has as its basic premises a class based system of rich and poor, a owner and a working class, the concept that individual investors be in charge of the means of production , and the concept of private property and accrual of wealth in the way of stuff.

We can live in houses without any of that.

From the UK I read that more significant fires have occured in the past, for example in 1939. https://en.m.wikipedia.org/wiki/Black_Friday_bushfires Is this information wrong? Certainly Australia’s concerns about nuclear power lack justification. I am interested to learn whether reaction to bush fires also needs tempering with data, in this case from the past.

Giving up on capitalism doesn’t mean giving up on progress, science, technology. Capitalism Often stands in the way of progress.

No, but of course, capitalist plutarchy and wigwams are far from the only options.

Yes, thank you, this is a world problem. So let’s put out the fires. War on fire.

But I also agree with some other posters, that maybe heating up is desirable for a few power players. The actions of arson, like terrorism, are difficult to curtail.

Fire is also a common tool of war, as for instance when Saddam and Kuwait were fighting for control over oil, and the whole area was lighted up. Can we stop war? No. Can we make fire in war illegal like with nuclear?

A quick check on the Net shows that there are heat waves in Australia, just as there are across most of the world at those latitudes. Back in the 1960s-70s, there were bad ones, as well as in 2008 and 2009. From Wikipedia: “In early 2009, Adelaide, South Australia was hit by a heat wave with temperatures exceeding 40 °C (104 °F) for six days in a row, while many rural areas experienced temperatures hovering around 45 °C (113 °F). Kyancutta on the Eyre Peninsula endured at least one day at 48 °C (118 °F), with 46 and 47 being common in the hottest parts of the state. Melbourne, in neighbouring Victoria recorded 3 consecutive days over 43 °C (109 °F), and also recorded its highest ever temperature 8 days later in a secondary heatwave, with temperatures peaking at 46.4 °C (115.5 °F). During this heat wave Victoria suffered from large bushfires which killed 173 people and destroyed more than 2,500 homes. There were also over half a million people without power as the heatwave blew transformers and the power grid was overloaded.” If such a massive heat wave hit only 10 years ago, why aren’t there procedures in place to deal with another? Maintenance of fire-fighting equipment, procedures to mitigate fire damage through brush clearing and firebreaks, and quick responses to small outbreaks would seem to be the most reasonable precautions, and not terribly costly. In Texas, we regularly have ‘heat waves’ (we just call them “summer”), and have things in place before the things really heat up. The weather changes all the time, and we need to be responsive to it, rather than simply trying to fix things after they’ve gone horribly wrong.

Australia is burning and I ask: where are Macron and Greta Thunberg to say something? Why they are completely mute about Australia? They are liers about Amazon its what they are, they are not interested in ecosystem they are interested in depreciate the Amazon reality to atend Georges Soros and steal the Amazonian minerals. But now their dream is over, Brazil has a new government, supported by 200 millions of patriot people. God save Australia, and I wish Georges Soros and Macron (the micro France president) go to hell with their NWO. Everybody must ask the Micro president and Greta Thunberg about the Australian eco disaster.

A wigwam sounds pretty good to me. Just sayin’.

Both Australia and the uS have climate denier leaders.
They are fools

Please differentiate between the US govt,
and the American people.

And don’t forget (really. Do not!) the international banksters, who honestly don’t care what nations burn ( like Oz) or are raped (Sweden, Germany) or starved (Venezuela, Haiti) or poisoned (Samoa, vaccines) so long as it furthers their New World Order, which basicaly means less freedom for all.

The late US Congressman Jim Oberstar was one of their useful puppets. He was asked to use native peat to absorb the oil from the Gulf of Mexico oil rig disaster, but he refused, & ordered millions of barrels of toxic stuff dumped to “disperse” the oil. It was exothermic, truly toxic & had no business in any ocean. That stuff literally broke up the global current, causing among other things a brutal winter in England. Fish encountering even a drop of that stuff died horrible deaths.

Also remember Fukishima, which is STILL leaking radioactivity into all our oceans. Fish caught off California carry traces of Fukishima radiation. (& last i knew, Japan was not American.) Dolphins miscarry and other creatures literally commit suicide to escape the pain, beaching themselves en masse.
The toxic oil, and the radiation, have verifiably helped raise the temps of the oceans.

Okay people… let’s not point fingers. Let’s get together and save this country and animals then humans. LoL

jk. Ya have water around you.use it… what is the primer mister doing?..how can United States help. Can we donate water bottles for the animals?