'Extraordinarily Harmful': In Disaster for Planet and Gift to Industry, New Trump Rule Would Gut Restrictions on Potent Methane Emissions

Trump is following the script. Methane is his modern version of Zyklon B. Filling the atmosphere with methane not only accelerates global warming, breathing it will kill you. This is beyond belief crazy and suicidal/homicidal for Earth’s inhabitants.

This is beyond belief crazy and suicidal/homicidal for Earth’s inhabitants.

Unfortunately, this is another area where Orangeman is basically doing the same thing, only shamelessly. It’s been no-holds-barred on methane emissions (especially massive fugitive emissions from fracking) for quite awhile. It has seemed as if only one guy in the whole country gives a damn, and that’s Bob Howarth of Cornell. The lonely, intrepid warrior has flown over oilfields on his own initiative for years, establishing the slightest skeleton of a methane monitoring effort.

Not taking methane seriously is the tip-off: you know the Man is not serious, because reducing CH4 could be quick and effective. Nobody’s even trying. Those nobodies are all over the place.

So, the gas and oil companies can’t remain solvent unless they are allowed to poison our air, water, and life itself.

Adding to the major methane releasing taking place in the arctic circle is beyond insane. The 50Gt methane release projected to take place within the next 18 months or less speeds up the time table with this ruling. We are set for a Blue Ocean Event and the 50Gt Bomb within months. There no time to waste, shut this place down now, all of it. But we won’t…so long it’s been good to know ya’, Woody Guthrie, sing along with the bouncing ball…so long, it’s been good to know ya’…

Trump is so far beyond the insane point he’s now totally off road and stuck in deep muck. It seems he literally sits up at night munching on Big Macs, watching FOX “News”, and trying to figure out how to destroy life on the planet ASAP while making as much profit as possible from its destruction. Perhaps he believes that with all that pesky life out of the way he can create a global golf course. A huge golf course left as a sick monument to the world’s biggest ego. Well Don ol buddy ol pal you better get in lots of practice prior to playing your planetary golf course. I hear those water traps and sand traps are killer. What a dick we have as a so called leader. The only thing monumental about him is his combined selfishness and stupidity.

Although its been clear for some time the trump regime is determined to destroy all prior environmental, animal, and human health protections, the latest acceleration of such suicidal actions must, or should, cause every person with even a smattering of intelligence and/or scientific understanding, that the agenda of this regime, that will lose its power, is doing all it can to empower and benefit crony co-conspirators before that defeat - a crime against all life on earth!!

The enormity of their crimes and contempt for all that has gone before must be challenged and fought, to oppose every depraved act to “roll-back”, open The Wild to exploitation, pollute air, soil and water with impunity, threaten endangered species and their habitat, along with showing utter contempt for the lives al humans and all life on Earth, denying the reality of man-made climate heating/change.

The acts of this regime are an abomination and crimes by any sane measure that must be opposed, and that very much includes the very much complicit DINO DNC complicity/collusion and presidential circus - the people chosen/allowed to participate, given the constraints of the ruling vulture capitalist class and the power of big money determining who succeeds and who does not - whether big-money capitalist profits and “growth” above all else continues to rule or people of wisdom, integrity, honor and dedication to the Common Good and science can wrest power from those frankly evil and ignorant forces, of which the odious depraved, insane, trump regime is only the current tip of the iceberg - albeit a very large tip!

Bernie Sanders is the candidate and vision needed IMO to change the dynamic!

I can’t say that human civilization will collapse if I don’t get my solar and other climate change inventions out. Maybe someone else will invent something better in each case. Maybe humanity is in the can anyway. Maybe I’m deluding myself about the engineering. Yes, maybe I’m crazy. But I don’t see any of the above possibilities as particularly valid, so I carry this urgency with me.

Yes, the Trump Administration is a death cult. But know that you’re sitting out there and not doing a needed thing.

Methane is an irrelevant greenhouse gas outside of the laboratory and in the atmosphere because it only absorbs and retains Earth’s escaping long-wave energy in two very specific short radiation bands @ 3.3 & 7.5 microns, where that energy is also absorbed by water vapor. Water vapor is 5000 to 10,000 times as prevalent in the atmosphere as methane and has long since saturated the absorption factor in those narrow bands leaving virtually no energy for which methane can compete and certainly not enough to worry about increased levels of methane capturing. The only source for methane capture of energy in the atmosphere has long ago been exhausted. What it can do in the laboratory (25 times more energy absorbent than CO2), it cannot do in the atmosphere.

Water vapor has already absorbed the very same infrared radiation that Methane might have absorbed. Guest essay by Dr. Tom Sheahen Q: I read that methane is an even worse greenhouse gas than carbon…

The just-announced White House plan to reduce emissions by 40 to 45% by 2025 ignores well-established textbook science. Just who are these EPA folks working for – and where is their science?

Stop The Devastation of Peoples Lives By Speculating with No Data:...

Guest Opinion: Dr. Tim Ball Release of early data from NASA’s OCO2 satellite triggered the typical nonsense. The usual people talked about the modern equivalent of how many angels on the head of a …

Not exactly, no business will remain solvent long term on our present trajectory, what we’re seeing now is their admission of this fact, and as BigB say’s above, grabbing as much cash as they can before the environmental crash, hoping to protect their own families with that cash.

That’d probably be Ethane (heavier than air, you’d probably be dying before the city-block-sized explosion?) Still, the Mariner Express 2 passes right across the road & above four schools in one of many criminal violations of PA’s own laws. So, they imprison protesting land owners! I was down Pittsburgh last year, when a brand new ethane line blew, right after a brand new 36" 1,800psi methane line in WV. By Trump’s election, there were 14,222 fracked wells in PA, with 19 major pipelines underway to carry fracked Marcellus gas south to power air-conditioners 24/7 (Jesus SMITING 'em?) Now, it’ll be green washing NYC’s superdelegate/landlord’s carbon footprints…

Making Visible the Globe-warming Gases of the Permian Fracking Boom

There is an LED sign at a Chase Bank in downtown Midland, Texas, the heart of the Permian Basin, which quantifies the current oil boom. It alternates between current rig count, the price of oil, and the price of gasoline. On October 30, the day I... 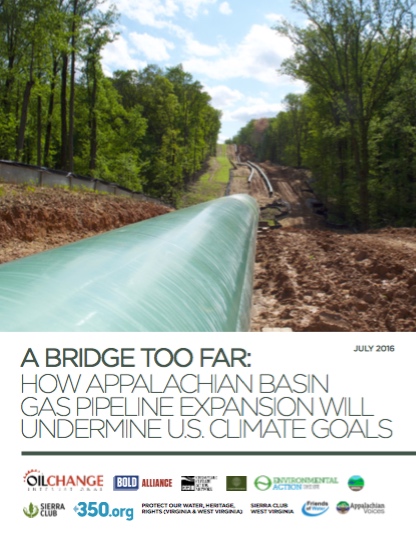 A Bridge Too Far: How Appalachian Basin Gas Pipeline Expansion Will Undermine...

A new report out from Oil Change International, in partnership with 11 other local, regional, and national organizations, shows that current projections for U.S. natural gas production – fueled by a boom in the Appalachian Basin – will lock in enough...

There a reason all of these regulations were implemented in the first place and that because the Industry would not implement these precautions on their own.

This again puts a lie to the nonsense advanced by that US strain of Libertarianism that the Corporations would monitor themselves under a “Free market”.

VIDEO: There are 2.5 million miles of pipeline in the US network.

For some perspective this charts out the MAJOR oil and gas pipelines in the USA. Keep in mind many of these are 50 plus years old and even the newer ones are subject to leaks and breaks. This infrastructure crumbles and no one is really responsible for the cleanup of the same as those costs externalized under the system we call Capitalism. This latest boom means even more of these pipelines built and just as those already extant within the USA these too will degrade over time and they will be there for decades and more.

The total costs to the environment caused by the oil and gas industry is beyond comprehension. If they had to pay for these costs they would as an industry be unprofitable. The profits are in effect based upon the destruction of the natural world. These are not “entrepreneurs” these guys are thieves and thugs.

What the Trump admin is doing is just the same as all the others before it, just more transparently or blatantly. Some have been very hidden. Think Obama and Standing Rock or Bush II’s silencing of NASA scientists or Reagan tearing down Carter’s solar panels on the White House. So nothing new. Until folks get real and start getting rid of all the energy corp stooges in the govt, and there are tons, nothing will get better. I fear it’s too late to now avoid a catastrophic collapse of industrial capitalism. If, after the fall, there’s people left they can form a socialist system based on need instead of greed as it is now. Peace

Just who are these EPA folks working for – and where is their science?

Welcome Ollie. Most progressives do not need to be told the answer to your question.

There appears to be only one person making decisions in the US today. Whether imposing reckless tariffs on China or gutting the EPA - Donald Trump is the only decision maker. There is one reason for this - the people’s voice - Congress - has failed in its job to represent the people through that branch of government. Congress has basically become a lap dog of the president. This is not a good thing but with people like Pelosi running Congress we will never have our voice or our desires heard against the shrill tone of Donald Trump.

Before the post Katrina slick-water fracking pyramid, we’d been drilling deeper and deeper in the Gulf. Exxon abandoned an exceedingly deep well, Chevron completed another, before BP’s Deepwater Horizon blowout (which, yes, Obama and most of the press tried to obfuscate and lie about). Peak Oil was that point where oil became costlier to extract, process & transport than its market price. Factor in AGW, early deaths, forever wars, the industry’s control of our governments and economies and I’m guessing, we’d reached fossil fuel’s death spiral, quite some time ago. Maybe, they’re trying to fuck us?