Alexandria Ocasio-Cortez’s (D-N.Y.) refrain: “They have the money, but we have the people.”

And fellow progressives, AOC speaks the truth! The corrupt, people will use their $$$$ to try to derail Bernie’s campaign and it seems to me, that the only way to stop them is for us Bernie acolytes is to say: NO WAY! NOT THIS TIME!

If one has a brain, is not corrupt, and has been paying attention, Bernie is the ONLY CHOICE for “We the People”! Everyone else is just another politician with an ego, agenda, or both.

Bernie is surging and either number one or a close second in the states leading into Super Tuesday.
He will be here in California doing rallies and has ramped up our volunteer teams with training and phone banks as well as continued canvassing. We are stressing that voters keep checking their registration and to request vote by mail.
I don’t hold out much hope that the debate will be better tonight than the previous CNN and MSDNC,
But at least we won’t have to suffer Chuck Toad or Fredo Cuomo.

Or as Jim Morrison put it

"They got the guns, but, We got the numbers"

I missed the most obvious, Phred. Thanks.

Is Jimmy Dore right? I’m interested in progressive input. (Really gets started at about 4:00 but the first four minutes are interesting also.)

Here an article about the M$M bashing Bernie Sanders and his supporters with blatant lies: 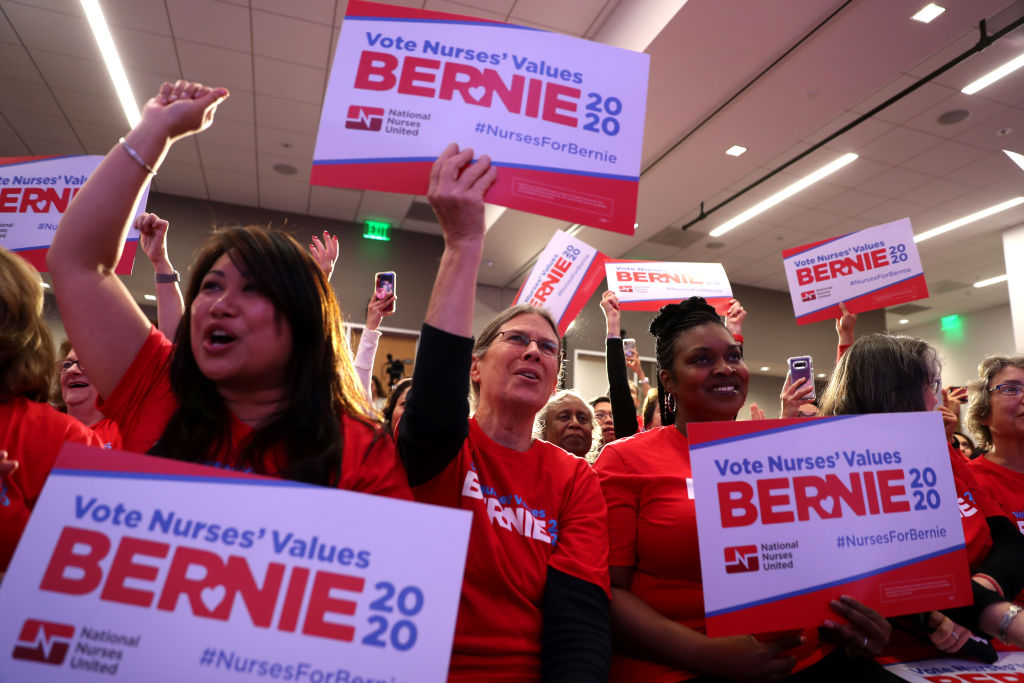 In today's political discourse, you can say whatever you want about Bernie Sanders and his supporters without any baseline expectation of fairness. You can completely invent sensational allegations of sexist hypocrisy among Sanders supporters — and...

“They got the guns, but, We got the numbers”

My Nephew was associated with the Doors. Thanks.

Groups endorsing Bernie will be advised to not just stop at their endorsements.

But rather, they must put on notice the entire Democrat party structure including the DNC, the DCCC, Nancy Pelosi, Chuck Schumer, and all of their lieutenants and lessors, that their support will not be taken for granted.

And if it is, their constituents will be directed to throw their support elsewhere.

And where might elsewhere be, " to a party that cares for the common people."

We must not be useful idiots to the two Corporate/Military puppet parties, our entire lives.

Bernie could appeal to more voters if he offered a substitute for Dow Jones investing.
I think many people voting republican feel they have no choice if they want to protect their ass-ets.
Just a thought as Bernie has many policy changes, world changing ideas, and challenges already on the table.
Changing the model for investing would be yuuuge.

Spread the word about this bullshit, happening again in New York. California up to nonsense already too.

One of the biggest failures of our country of late. The unwillingness to call trump a liar every time he lies.
If Steyer and Yang have any money left over after the primary perhaps they could discredit every lie going forward. Would have to spend more on debunking than was spent on the lie.

Better yet make it a punishable offense with some teeth. Disqualification could head the list.

I’m pretty sure the democratic party, unions and others are making those in the dark aware of this glitch.
Nightly news, newspaper op-eds, and a mailer should be happening now.

I’m pretty sure the democratic party

I don’ think so. In fact, I would bet that the DNC and many leading Democrats are supportive of this and haven’t done a damn thing to Cuomo. This is inexcusable, and yet no one has done a damn thing. And they are already reporting “glitches” in California that are throwing voters off the rolls. But, then again, it isn’t clear what we mean when we talk about the Democratic Party. Is it the rank and file, those in charge of it and its various organizations, a combination of the two? If so, which has more power? Seems obvious, it is a hierarchical party in many ways. There is a lot the party itself can do to Cuomo for not signing that bill. Fact is, it has done nothing. It shouldn’t take all of that to get him to sign the damn thing.

I 90% agree with Jimmy on Bernie’s being far-too-willing to play footsies with the d-party.

But Bernie has always been backed into a corner.

If he attacks Biden as Jimmy suggests, he’ll once again be branded as “divisive” at a time when the party needs a united front to defeat Trump. You see commenters here saying precisely that.

In a similar vein, Bernie would receive the same “divisive” label if he were to run third party and be even freer to level the very apt types of criticisms at Democrats that Jimmy thinks would help him win.

Are Bernie’s advisors and Bernie himself making a miscalculation in playing gentle with the Democrats so far? Especially considering the way the DNC kneecapped him in 2016 and the way the Dem establishment will soon be kneecapping him again? I tend to think so, except that by laying somewhat low, Bernie has stayed very much a top tier candidate and even gained in the polls as others have faltered. If he has kept his powder dry, so to speak, it’s pretty much working.

And Ron Placone makes a good point in the video: Bernie has “outsider” status, which is precisely what voters want. Arguably, Bernie has plenty of time once he wins the nomination – needless to say, a definite longshot – to call out the d-party for its many failures and remind voters that Trump called out Jeb and his fellow Repubs in the same way back in 2016 – yet handed out gifts to oligarchs like any run-of-the-mill corrupt politician would have.

Anyhoo, Jimmy is right to have the jitters. But the jitters can lead you to put the cart before the horse.

God Dammit - In the words of that disgusting Bigot Ronald Reagan, I Am Cautiously Optimistic.

I realize that Progressives are up against a Barrage of Negative Publicity and Outright Lies about Bernie, BUT it appears as though the Revolution against the Greedy Plantation Owners is beginning to take hold?

The Media and the High Paid Pundits can ignore the Humanitarian Message of Bernie but they will not be able to ignore Election Results if We The People actually get off our ass and go out and Vote.

What is absolutely essential in this Presidential Election is whether or not the vast number of disenfranchised Americans make the effort to cast a Ballot for the 21st Century FDR?

I 90% agree with Jimmy on Bernie’s being far-too-willing to play footsies with the d-party.

(Funny, that was the %-age I was thinking of also.)

BUT…isn’t politics, by definition, ITSELF divisive?

I do think Bernie has to be more aggressive and drop the “friend of mine” bullshit; especially, when the corporate media is portraying him and Waffling Warren as THE SAME and then pushing for her!

Anyway, ST, I’m getting too old for this shit. Fought too many battles over the years and jail would be harder for me now. (-:
Bernie is my last marker on the board. If he doesn’t get in, I’m retiring. The Kucinich fiasco not only put a BAD taste for politics in my mouth but broke my heart that we would not get the leader that “We the People” DESERVED! It happened in 2016 and, I fear, it could easily happen again this go 'round.