all this evil shit is wrapped up into the 40 year class warfare the republicans (oligarchs) have been waging yet no democrats will even mention class.

Meanwhile, here in Seattle, I just found out today that Sen. Patty Murray (D-WA), the “soccer mom in tennis shoes,” took campaign money from the Geo Group, one of the privatized prison companies imprisoning, well, everyone they’re imprisoning. Her campaign spokesperson blew it all off, saying, “It was just a tiny fraction of the $12-13 million she raised for her last re-election bid.” I don’t give a shit. She could have taken just one penny from those assholes. This is why I do not support Democrats. This is why I do not vote. It. Is. All… Bullshit.

Andrea, I’m on the side of democracy, inclusiveness, and a people’s peaceful and patriotic Political/economic and socialist “Revolution Against EMPIRE” [Justin du Rivage, on our First one].

I think I’m starting more and more to get the 'Strategic Narrative" of EMPIRE out as the proximate focused and targeted meta-cause of all the ‘issues’ of; immigration, racism, guns, war, and more with (and through) the more influential and opinion-setting NY “Times”, along with principled left progressive sites like TruthDig, Common Dreams, Popular Resistance, AntiWar, etc. 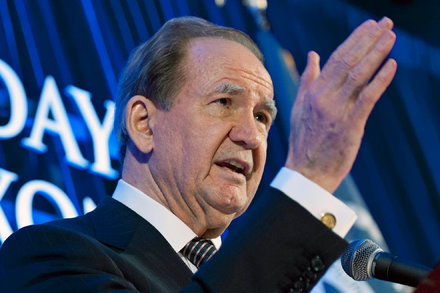 I’ve written several “Times” comments on this through the years, often referencing the insightful comment of ‘trusted newsman’ and author of “The Greatest Generation”, Tom Brokaw on “Meet the Press” - November 22, 2015 in this transcript:

TOM BROKAW: Well I agree, listen. You know, when Donald Trump talks about security or Ben Carson, we’re talking about three-year-old orphans who are orphans and refugees because of American policy.

And I’ve pointed out that in addition to Tom blaming it squarely on the “American policy” of causing the Middle East wars that drove refugees into Europe, that it’s also “because of American policy” of acting like a militarist global Empire.

And now, three years later, what both our feckless Vichy-like parties have managed to do, by doing nothing, is to drive kids from multiple over-gunned and drug exporting countries south of the U.S. into our own country — just as it caused those “orphans and refugees because of American policy” coming into “Trump’s Cages” (which BTW, serves Emperor Trump’s political agenda of ‘winning’ by metastasizing America into even more of an obvious global Empire than Brokaw could imagine.

And, now, the same divided, and deluded lumpenproletariate that Emperor Trump birthed in 2015 has been lied to and enflamed, to support and follow a ‘leader’ (‘Fuhrer’ in German) and faux-Emperor Trump into Making America an Empire Again.

As Obama liked to say, if not do, “The arc of history bends toward justice” and away from EMPIRE — but very slowly.

This administration is truly evil at its core and so is its mouthpiece FOX. Those voters who still support this administration will certainly pay with their souls and the corporations that fund FOX should be shunned as evil and full of sin. God will certainly not be kind. No amount of prayer or confession can cleanse this foul dirt. Those preachers that still preach this as righteous are the devil’s apostles.

allen, that’s the advantage of a dual-party Vichy-political facade in effectively disguising an EMPIRE today.

The Nazi Empire, when it invaded, ‘captured’, “Occupied”, and controlled the former country of France (c. 1940 to 1944) only installed a crude and single party Vichy disguise that fooled very few of the French people.

But after the Second World War of Empires, and after the OSS (precursor to the CIA) carefully studied, analysed, and improved the design of the facade with two Vichy Parties, and after the naive haberdasher Truman was installed as VP based on FDR’s coming death (and Henry Wallace being pulled aside) the Truman propagandized new president swallowed the evolving Empire’s hidden plan to install the ‘Dual Government’ of two Vichy Parties and bulked-up their Secret State:

Not far from the Algerian border, the infant gave up its fight for life under the punishing Saharan sun.

As Obama liked to say, if not do, “The arc of history bends toward justice”

He was citing MLK.