Helping Students Keep Their Humanity by Not Signing Up for War

This is significant work, much needed.

Significant, indeed. Very. It highlights the value of Sander’s and Green Deal’s push for a federal job for all - to build the country. Instead of a federal job to go fight for corporate markets in the rest of the world. Simple. Just re-route the funding.

This group needs broad funding and expansion across the country.

Before 9/11 I had many military officers as graduate students. We spent a lot of time together as the research involved field work in wetlands and involved multiple-day trips. I got to know them very well. Many indeed joined the military because of the educational opportunities it afforded them. The country was (seemingly) at peace at the time. I’ll note that these officers are some of the finest and funnest people that I know. Their work ethic was exemplary and their word was their bond. Let’s please remember to hate the war and not the warrior. The latter does not get sucked up into the cause in a state of awareness, but usually a state of impressionability. As I have stated before, I would love it if every high school student would read Smedley Butler’s War is a Racket every year of their program. Peace.

Just as there racists and those that fight against racists in the general population , the Military and those that served in the Military reflect that same dichotomy. There are Soldiers that are serving that are proud of what they did , who relish the role that they play as “defenders of freedom and liberty” and who can kill without it affecting their mental health at all.

A recent leak of a database for a now defunct White Racist group revealed that a large number of US marines were members and there they boasted of killing rag heads and hajjis and of looking forward to the day when they could use their training to make America white again.

As important as it is for these Veterans to come to those schools to speak to the realities of war, it as important that they do not do as Police forces do and rally around others that served just because they served. To do good they have to turn their backs on those that would do evil.

To the point of hating war and not the warrior you can in fact do both and should do both because just as there are individuals in Police forces that want to do good , there are those that are rotten to the core . The warriors you refer to are not universally victims.

If you want further example of this while there some ex warriors who volunteer their time to counsel these children on the realities of war to their great credit, there are those that will join Mercenary outfits like Blackwater and keep right on killing.

Studying war so there’ll be no more

I happy to hear of this group and hope to have them as part of my Social Psychology class room discussion in the Spring 2020.

Firstly, army, navy, marine, coast guard, air fierce, merchant marine SERVE. They are not on active duty or in reserve or national guard units just for their own educational benefits, They arrive from the southeast states and northwest territories. Not from the coasts.

Today, veterans day, lets take a look at our living veterans for a moment.
approx 22 million
Korean War era had about 8 million members. One of six army and marine combat veterans on the peninsula had / have nightmares. A responsible job is still the best cure.
Viet Nam veterans have the same one of six having nightmares.
Desert Storm has units (cottonbalers) who suffered brain cancer, kidney failure and now parkinson’s.
Afghanistan and Iraq are both soldier and marine disasters, One of three have nightmares per VA.
This is why they needed 1,600 additional counselors about 4.5 years ago.

The high school students ask good questions and I always reply truthfully the good, the individual sacrifice and - the morality, ethic, patience needed.

Those who come into military life without a humanitarian base will not magically gain one. The tough white supreme types identified in hate groups said to be marine veterans in the article were probably recruited into these hate organizations after their military service years. Also, were they discharged early for good reasons ??

anyone at commondreams who have been sent out across our vast planets lands and seas to manage by wandering, salute.

I’d encourage this work to start early, like preschool and elementary school. Unfortunately, I have found that many high school and college students that I have taught are very unwilling for the question of militarism to be raised - even if it is doesn’t happen in their class. While I have been very impressed with veterans, who’ve gone on to question militarism and imperialism, this year I’ve seen many young veterans sporting the “Imperialist Warrior STRONG” hoodie proudly listing several (a small fraction) of US imperialist attacks in the flag’s stripes: 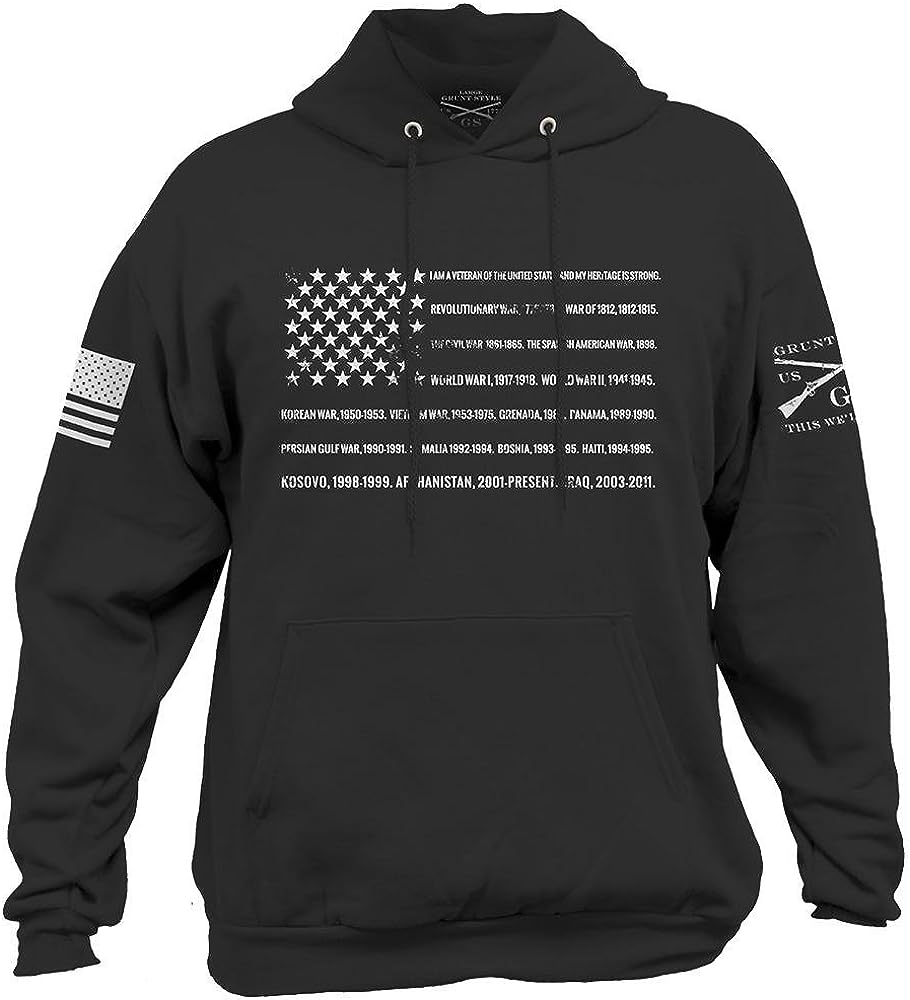 Language means so much. Let’s quit using the word “warrior”; stop thanking people who are, or were in the military “for your service”; and stop referring to military personnel as “hero’s” (there were certainly some heroic acts performed; but, just being in a combat unit does not a hero make). I was a Vietnam era vet, Capt USAF, C-141 pilot with missions into the combat zone.

Watching the NFL this past weekend, the propaganda included statements to the effect that without the ‘warriors’ we would not have the freedom to play football.

Thank you for taking the time to inform us and US from a position of genuine experience. The movies and ads just don’t cut it.

Without the parts the war machine would grind to a stop.

Same. I joined and became a pilot to escape the draft; took cargo out of flight school to stay out of “fighters.” I always considered myself a coward for avoiding the draft altogether and not going to Canada, or prison, as so many did. Anyway, those experiences helped make me what I am today. That is why I commented on the propaganda farce that Armistice Day has become. War, the military expenses and the empire mentality is breaking our country, morally and fiscally, while the shrews obligingly march towards the cliff. No empire has ever survived.

I feel your message is as ambiguous as the heartbreaking cliches that are purposefully driven into our sports arenas of “service, courage, sacrifice, honor.” I understand your concern, yet feel we as a nation should get away from the use of the term “SERVE” when it comes to war. It’s preachy, in that it juxtaposes reality. Here’s an idea, could it really be these young girls and boys “serve” the corporate kingpins that profit from war? Bringing the USA down ro ranking 121st in global peace? Spilling out into school shootings? I think this program should be funded across the USA and brought to EVERY school starting in middle school. It’s come to a time when young adults are being re-educated through Sci-Fi’s based far more on the reality of America’s war economy than the reality TV show our media has become. Hunger Games is metaphorically based on our REAL war games. It breaks my heart and makes me scared for the future of our children. Thank you to those spearheading this movement. It’s so refreshing and needed more today than ever in the history of our violent nation.

Thank you for commenting. I do not write all that well.
ambiguous?
Not at all.
The 22 million living veterans

should not be diminished just because less than 1,000 are today members of a known hate group.
The writer, Hoh, and others regret their military time in active duty.
I do not.
Helping 3,500 orphans escape Cuba.
Guarding little old black ladies in Alabama who had never been allowed to vote. They marched from their church to the courthouse one beautiful May morning. There were 13 KKK guys waiting with side arms. They did not dare twitch.
I do disagree with being in Afghanistan, in garrison. This means our soldiers are not out patrolling the countryside. They are Bolton’s attackers into Iran from the east. Aren’t you glad he is out of the white house? I sure am.

So, 22 million veterans.
2002 - today has 1 of 3 combat veterans having nightmares.
The tactics are wrong.
The strategy - if there ever was one - is a total failure.
These two elements are not the army soldiers or marines fault, at all.

Militarism being taught in school? Spilling into shootings? It’s rarely mentioned that the Parkland teenage shooter was ROTC when he attended that school.

Let’s please remember to hate the war and not the warrior.