If This Wasn't So Dangerous I'd Be Laughing': Trump Presents Outdated Dorian Forecast Map With Alabama Circled With Sharpie

Rather than owning up to what may have been an honest mistake, he chose to lie and even commit a crime trying to prove he wasn’t wrong. This is textbook narcissistic behavior. We have a mentally ill president.

Lying as pathology, with such an inundation, the phenomena becomes a passing joke.

Trump is brilliant in a that mentally ill kinda way.

And Hillary helped pied piper him to the nomination, then lost to him. Damn, yo.

Come no hell or high water 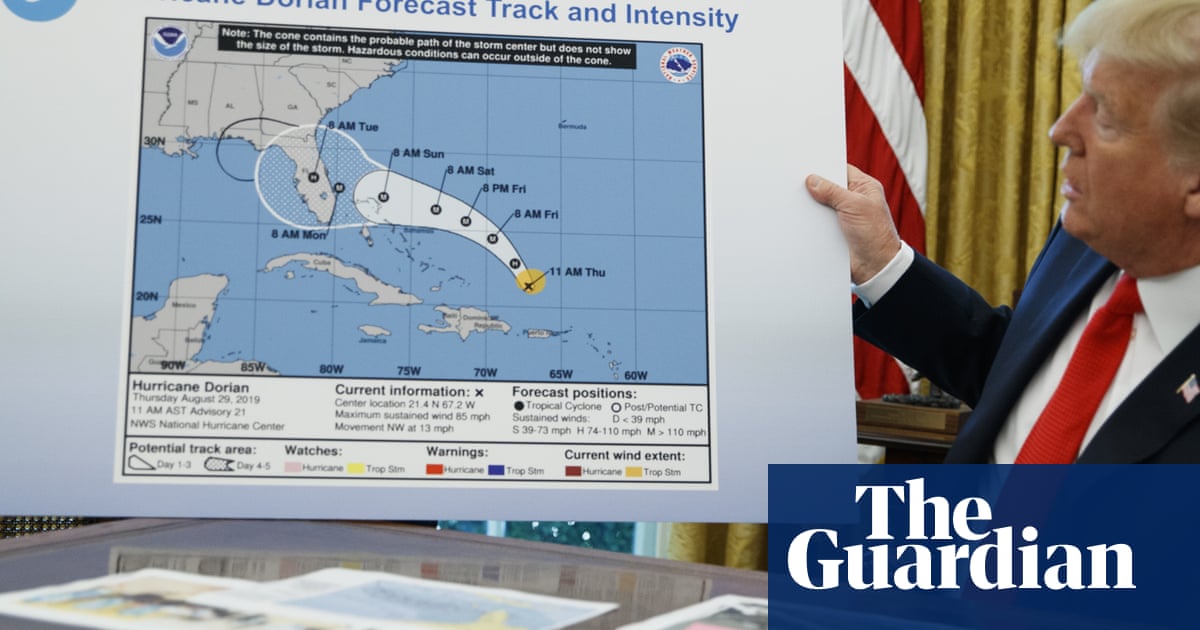 Trump points to map with black loop extending hurricane’s path, after previously tweeting – without evidence – that Alabama would be hit

Who voted for this guy???

Do you want their names?

Is that an option?

To save some the time I took to find the exact Statute:
https://www.law.cornell.edu/uscode/text/18/2074

18 US Code 2074
Whoever knowingly issues or publishes any counterfeit weather forecast or warning of weather conditions falsely representing such forecast or warning to have been issued or published by the Weather Bureau, United StatesSignal Service, or other branch of the Government service, shall be fined under this title or imprisoned not more than ninety days, or both.

In a democratic context yes.

Let’s go for both.

I just hope someone explains to “the great one” what those letters on the states mean.

What’s up with the misleading headline common dreams? He didn’t just “circle Alabama” on an old map, it’s literally not even a circle - it’s an arc. He added an additional arc to the map’s impact layer one so it’d have an additional layer that’d include Alabama.

The issue with your chosen headline is it can imply that Alabama was in the initial cone, which works to spread his lie that it was initially forecasted to be hit. Saying he just circled Alabama in sharpie implies the same thing as saying he just circled Miami in sharpie - that he is highlighting an arbitrary area to indicate that at some point his claim was truthful.

In this case, he added a layer to the cone. He literally falsified the map. That’s a big step further to cover his gaffe - falsifying these maps is dangerous and illegal on top of being pathetic. He took a real map that showed no impact to Alabama and altered it in a way that indicates there would be an impact. That’s a WAY bigger story than your headline hints at.

In these cases of natural disasters the media has an even bigger responsibility to ensure that clear and accurate information is being shared. Even more so that now the president is trying to pull a “we were always at war with Eurasia” that could make Alabamans evacuate a non existent hurricane. The headline is often all people read so there is a 4th estate responsibility to craft headlines properly when it communicates whether regions are in danger.

So, why didn’t you write the accurate “Trump Presents Altered Dorian Forecast Map With Alabama Added With Sharpie” instead? Why lean into his propaganda by simply saying he circled it on an old map?

here ya go Dems. Something impeachment worthy. Get to it!

I thought maybe trump knew some official in Alabama and wanted him to get some emergency funding. Sadly, that kind of behavior isn’t foreign to him.

No joke. Like most things this man has done, they can be viewed as a threat to the health and general welfare of the population. Congress is complicit because it does nothing. You are on your own and it seems everyone has a gun. Beware, be aware. No joke,

I guess it must be the music. The lyrics don’t seem any too impressive:

But I defy anyone to give this a listen (Huddie William Ledbetter, called Lead Belly) without moving to it. After centuries of Sisyphean philosophical and scientific expeditions searching for some distinction which sets humans apart…

What a stupid quest, to rationalize anthropocentrism. For a couple of minutes I thought “Humans are the only species which thinks they’re so much better than all the other species.” Then the cat strolled by to inform me otherwise. So that can’t be the long-sought distinction. Then comes the subject of rhythm (specifically: dancing to it), which really does look to be uniquely human: Even a little baby will dance in its crib if the beat is down. No other animal does that, so far as I know.

It has always felt to me as the sharpest pain of human extinction: Someday someone will celebrate human joy by letting go with Alabama Bound (or Beethoven’s 9th) for the very last time, ever. And then Huddie Ledbetter’s work will have finished.