It seems Bernie’s–and our–fate is in the hands of the young people. It is their turn to be heard and create the kind of government and planet that is best for them. STAY STRONG young people and do NOT be bullied out of following your dreams of a good and fair future!
VOTE Sanders for a better country and world!

Bringing up the UK election is absolutely absurd.

“It seems Bernie’s–and our–fate is in the hands of the young people. It is their turn to be heard.”

I guess Bernie has lost a few supporters since Corbyn lost, perhaps thinking that this will happen here too so they’d better go with a winner. And now his campaign unendorsed Cenk.

Progressives fold too easily. When Republicans dig up a mysoginist joke Cenk made years ago true to his past conservative Republican worldview, Bernie (advisors?) threw Cenk under the bus.

Bernie said that if he loses, he will strongly support whatever Democrat is nominated. His long progressive record shows he is not sheep-dogging. But his advisors had better develop some balls. Voters might vote for a fighter over one that rolls over.

The only saints are in heaven and that doesn’t even exist.

The overuse and weaponization of the anti-semitic trope serves to antagonize rather than create sympathy. It draws unwanted scrutiny, and its appearance in a wide variety of settings provides energy for continued speculation about this unique group’s power, influence and position–which are the roots of anti semitism itself.

Bernie should have put in a caveat: will support provided that the process is fair, the convention runs its full course, and super-delegates do not play a pre-emptive role. Personally, I think this is one pledge he should back away from–his remaining legacy would be to establish the basis for a new party. His final gift.

So the article seems to infer that Corbyn lost largely due to the anti-semitism meme.

IMHO Corbyn lost because he put party in front of country. The British Election was primarily about Brexit. He decided to sit on the Brexit fence and talk about social policy. ( In the end Corbyn’s party didn’t do too badly getting 200 seats.) Hindsight is always 20-20, but he could have declined to run candidates in Scotland, and where the Liberals had incumbents and 20 Liberal leaning constituencies (with or without some sort of deal with said parties) and run on a no-Brexit ticket. The Labour party could have presented itself as a national unifying force, and forward looking referencing future job growth, youth, and the economic/ cultural benefits of staying in the EU. Perhaps would have gained more seats and then stopped talk about referendums.

And of course Corbyn should have dealt with antisemitism more forcefully from the get-go… but that’s a secondary or supplemental matter re: results.

Why should we care what the washington examiner says?!

Sanders and Omar represent a vision for the future of economic, racial, environmental, and social justice.

And the Republicans call Sanders and Omar: " left wing radical, nut jobs"? I guess that makes me a radical, left wing, nut job!

My take on this, far from an expert, was that Labour itself was divided and he was basically screwed either way. He seemed to have waffled on Brexit, which was the dominant issue, and that along with the intense media campaign against him made him deeply unpopular as an individual. My understanding is that the particulars of a good chunk of the Labour platform were popular, and the austerity and the privatization of the (at least British) NHS that Johnson and the like support are deeply unpopular. But, since Johnson was firm on Brexit, his horrible positions, issues, record and clowning conduct during the campaign didn’t cost him enough. Would Johnson have won if the oligarch media did to him what they did to Corbyn? Of course not, there was far more to hit him on. But, that didn’t happen. Having said that, as flawed as Corbyn may be in some ways, how in the hell does he come off as looking worse than Johnson? It seems that lots of people thought of Corbyn in isolation, and not in comparison to an absolutely clown ghoul in Johnson. That, to me, is a reflection of the propaganda.

Sanders and Omar represent a vision for the future of economic, racial, environmental, and social justice.

Most definitely, but older voters have to allow us to have a future. Right now, they seem overwhelmingly determined to give us a Biden versus Trump election. There is no future if that happens .

Biden versus Trump election. There is no future if that happens .

Only same old, same old stagnation for the 99% and constant growth for the 1%.

Thank you, Common Dreams, for running this as the lead article. Most of the so called progressive media would accompany it with a picture of Warren if they ran it.

I haven’t seen evidence of his losing support.

My take on this, far from an expert, was that Labour itself was divided and he was basically screwed either way.

So he/ Labour Party took a third way, in the hope of doing better another day i.e. 4 years hence.

The hasbara lobby is going to eat this one up. Eff them. 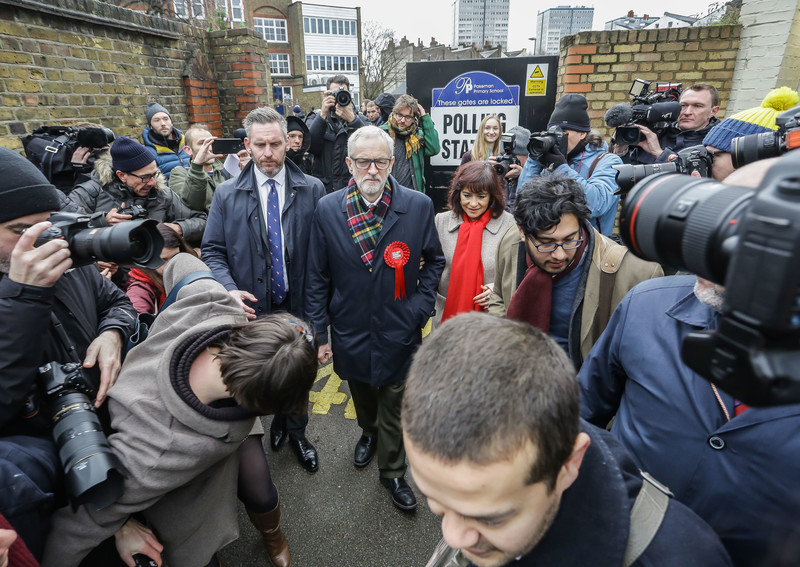 He seemed to have waffled on Brexit, which was the dominant issue, and that along with the intense media campaign against him made him deeply unpopular as an individual

In sum, I give more credit to the worker’s discernment of character, rather than only being an effect of media manipulation.

older voters have to allow us to have a future.

Got any polling on the over 65s?