It's Time for Nancy Pelosi to Embrace Medicare for All

It's Time for Nancy Pelosi to Embrace Medicare for All

A little over a year ago a resolution was introduced to the central committee of the San Francisco Democratic Party titled “Resolution Urging Senator Feinstein and Leader Pelosi to Support Medicare for All”. It was a pretty straightforward request: thank you for defending the Affordable Care Act, but it’s time to move forward. The resolution was passed 19 to 2 with 7 abstentions, and with Feinstein and Pelosi’s representatives mysteriously absent.

Problem is, Pelosi needs the votes of centrist, establishment, blue dog members of her caucus.

Guess what? They can’t be seen supporting socialized medicine their districts.
And guess what? Without consrvadems there is no d-party majority.

Now guess what the odds on passing HR676 are.

Now guess what the odds on passing HR676 are.

I’m guessing slim to none, and that we’ll get stuck with Sanders’s bait-and-switch S1804 until we can get money out of electoral politics (another long shot).

Harami sez: “The ‘Resolution Urging Senator Feinstein and Leader Pelosi to Support
Medicare for All’ … was passed 19 to 2 with 7 abstentions, and with Feinstein and Pelosi’s representatives mysteriously absent.”

They were attending a previously scheduled appointment with private insurance lobbyists to negotiate campaign ‘donations.’

Progressives…Negitive nancy is going to get absolutely nothing done for a progressive message. The 20 freshmen coming in have already shown me they are willing to cave to the D party antics. What a shame. This system is so rigged even if we vote who we want in…So FUCKING WHAT?. Nothing will move forward. WE need to break down this system!.

Neither any version of Single Payer/Medicare for All nor any version of any other progressive legislation will advance under the leadership of Pelosi and Hoyer - for two terrible reasons.

The first reason is that any vote on progressive bills would allow progressives to identify the holdout legislators and focus their efforts on the holdouts. If M4A is blocked in a committee by four or five Democrats, progressives will know who they are and can easily find out how much the health insurance industry gave to them in “campaign contributions.” Progressives would know where to mount primary challenges, where to recruit challengers, and where to direct money and other resources to replace the unprogressive Democrats. Contrast that with the current situation, which is best reflected in Hillary’s assertion that “It’ll never happen.” Hillary’s statement is artfully vague and discouraging. It is unparalleled as an emotional sledge hammer because it contains not a glimmer of hope. It triggers despair in M4A proponents who hear it, and because it is so vague, it prevents those proponents from even starting to focus their efforts to advance M4A. An impotent progressive movement is what Pelosi and Hoyer want.

The second reason is that a floor vote would be a corporate Democrat’s nightmare, regardless of the vote’s outcome. If M4A passed the House, it would certainly go nowhere in the Senate, but passage by the House Democrats would in effect weld M4A to the Democratic Party’s next platform. M4A would become inescapable and irresistable. If the vote were heavily in favor of M4A but not enough for passage, the holdouts would again be easy to identify and to pressure or replace, and the “impossibility” of passage asserted by Hillary would be disproven. Proponents would have hope, and with hope comes motivation. Voters, both progressive and moderates, would use support for M4A as a litmus test in the 2020 Congressional election. If M4A were soundly defeated - something that would require extensive Democratic Party opposition - the Party’s core corporate soul would be exposed. Such exposure is not a policy problem for the Democrats, given that both halves of the duopoly have the same policy goals, but it would mean that Democrats would remain a minority by discouraging progressive sympathizers whose votes are necessary for Democrats to win elections. Pelosi, wants Democrats to win because majority/minority status is an ego issue, and ego issues are important to her.

These pressures apply to all progressive issues, and the Pelosi/Hoyer team’s first response will be to keep a tight lid on all such legislation and on the new progressives in the DP caucus as well.

If and when a progressive issue gains too much momentum for Pelosi and Hoyer to squash it, the fight will be trench warfare over the details. “Pete” described this scenario best in this CD post of mid-November:

“It’s important to focus on the details. When the pressure for ‘Medicare for all’ becomes so overwhelming that Congress as a whole capitulates & passes something they’ll call ‘Medicare for all’, expect them to try and shove some watered down version of Medicare Advantage down everybody’s throats, with insurance companies still having a big hand in the till, high deductibles, copays and HMO-style limited choice…without continuing pressure, it will still be a long way from Single Payer.”

For progressives, the moral of this story is the same as always: Vote Green!

Progressives would know where to mount primary challenges, where to recruit challengers, and where to direct money and other resources to replace the unprogressive Democrats.

They just have to look at the campaign contributions for all Dems to know that. They don’t need a vote.

For progressives, the moral of this story is the same as always: Vote Green!

Wish that would work, but until we change the way we count votes with something like ranked choice voting, I don’t think that will ever work. What would work, though, is to primary Dems with Green candidates.

‘When pigs have wings’

To take the edge off that cold shower, here’s a trailer by the same phrase plus a pig in sheep’s clothing… no direct allusion of course…

oh, what the heck, lets have another go at it…

It’s time for Pelosi to retire. Well past the time.
She needs to go away and spend all the dirty money she made while in office pretending to care about her ‘constituents’.

The old guard inside the party have spoken, there will be zero change. The only option for progressive change, is getting out of the Dem party. It’s really that simple.

In 1994, Californians got to vote on a single payer measure, Prop 186. Although it got clobbered state-wide, it got a majority in San Francisco, including in Nancy Pelosi’s district. Yet, despite the will of her constituents, Pelosi has never supported single payer.

Pelosi doesn’t listen to her constituents (outside of her fellow multimillionaire neighbors living in Pacific Heights).

My bet is we’ll not know because Pelosi will be sure that it never comes near the floor for a vote.

HI theoldgoat and LOL, I’m not sure what I was watching but with both made me laugh, and so thank you for that. “A pig in sheep’ clothing” that was funny, and that lady dancer—wow, I didn’t know legs could do that! : 0

I gotta run - the library is closing!

It is time for Nancy Pelosi to go but the MSM, the press and public radio have been doing a huge push to confuse the public over this anointment. They have done a huge disservice: every thing I heard from talking or print heads taking those of us to task for daring to question that she does not deserve this job, fail to bring up the fact that under her “leadership” over 1000 democrats lost their elections during her reign as speaker. She took impeachment off the table (GWBush). She is ineffective and out of touch with what the people want and need from their government. She is not the kind of visionary leader that is needed at this time. And most importantly: Trump thinks she is a-ok.

Here’s the deal: Mitch McConnell isn’t going to let any bill he doesn’t like hit the floor of the Senate. None. Democrats can and will hold hearings though on future legislation, which will be important for figuring out issues like financing and coverage transition (for any program). That’s what was done when Eisenhower was president for Medicare.

Creativethinking, don’t give up! We have to carry the fight.

The news of Pelosi’s deceit can be the winning path forward for the ‘progressive’ Revolution!

As I strongly argue and project in the NY “Times”: 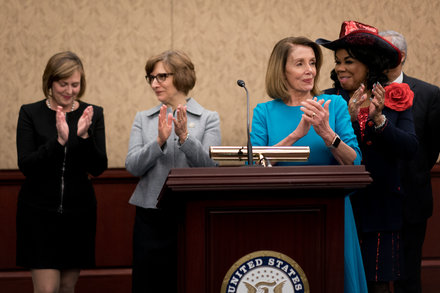 The 203-to-32 vote showed Nancy Pelosi had most Democrats behind her, but the result kept alive the threat of a messy intraparty feud.

And this will be the time for the “Revolution Against Empire”:

After 2020 the chances of Medicare for All might improve. IF Dems win the White House and Senate, and IF we primary out a bunch of corpo-dems and replace them with progressives.
Remember the polls. 70% favor Medicare for All, including 85% of Democrats. We can win those primaries if we unify and start NOW.

Someone needs to explain to Pelosi how far outside the mainstream she is.