Kavanaugh: Dr. Christine Blasey Seeks to Forestall a Trauma to the Nation That Was Inflicted on Her

Kavanaugh: Dr. Christine Blasey Seeks to Forestall a Trauma to the Nation That Was Inflicted on Her

Christine Blasey Ford, a professor of Psychiatry at Palo Alto University and an affiliate at Stanford University, gave a harrowing interview in the Washington Post Sunday accusing a young, drunk Brett Kavanaugh of having attempted to rape her.

Very disturbing is the ‘performance’ of this man entering the hearing room using his daughter as prop onvideo on DN this morning. Watch very closely to and tell me my concerns are unfounded.

Those supporting Kavanaugh do not care one whit about any accusations against him, no matter how serious or indicative of lack of judgement. They want him in there politically to push their agenda. Period. End of story. THAT is today’s America.

Do they still believe “God is shedding His Grace” on THIS … or on THEM?

She took her own horrible experience with spoiled DC elite males and turned it into lemonade for others.

This really chokes me up, because I’m someone who can relate. The last time I saw my personal physician, her routine inquiry “How are you?” led to my own history of childhood abuse. Because I’ve known my doctor a long time and rather like her, I wound up sharing that I’m not one bit ashamed of having been kicked around a lot as a kid. We abuse victims have a ready-made excuse to lead the rest of our lives as total parasites. Even outbreaks of sadism are explained (not excused) by “hurt people hurt people.”

But I think I’ve found it possible to reverse the flow, to receive the scars of abuse I retain as a gift and not a curse. I know what it’s like, from the receiving end, and that’s made all the difference. That’s certainly why Blasey is way up there with Harriet Tubman in my own gallery of real US American heroes.

Be proud that you’re coming to terms with the pain. I wish you well.

That said, I’m extremely happy that Blasey Ford was persuaded to come forward and identify herself. The timing is a little questionable, especially considering the Rs’ eagerness to push this confirmation along, but understandable in the final analysis. Oh, well–better late than never.

This related article at Slate is full of very important points – and is worth sharing and reading:

It’s worth considering who gets to decide that we’re in the eleventh hour at all.

Thanks, ST. It’s the only the way to fight: to be who you are.

When I was a student at SFState, both my old lady (somewhat younger in those days) and I worked our way through school via shit jobs. One of those, for me, was psychiatric nursing assistant (orderly at the crazyhouse). In that role I witnessed nearly lethal abuses, which I called the authorities to report, but without divulging my name. Because the person responsible was director of the facility and I an anonymous nobody, my concern went nowhere - partly because of my cowardice.

Those of us old enough to remember the public crucifixion of Anita Hill understand Blasey’s reluctance, and appreciate her extreme courage.

Possibly the most important revelation contained in your link is that Blasey Ford sent her story, not just to two lawmakers, but to a newspaper. Newspapers report things.

I respect and support her right to never have come forward at all. But excuse me for questioning her timing. Unfortunately, it gives the Rs the opportunity to second guess her motivation and proceed as planned. Those are just facts, as unpleasant as they seem.

sigh------the dicksters are everywhere : ( I recently read that Joe Biden blocked 3 women from testifying in support of Anita Hill, and Ted Kennedy did the same I am sorry that major media only thinks that the Hillary and the Joe are viable candidates--------. Did i read that here in a comment or somewhere else?
Well I guess old Joe should forget about running for President…

With sincere respect to you, the article I posted explains in great detail the timing of Ms. Ford’s accusations being made public. As a traumatized person, (which I know you are sensitive to, and respectful of) it was a long and difficult process for Ms. Ford (requiring great courage and much civic commitment by her) to send her letter in late July! So, I don’t think it’s fair for anyone to question or criticize Ms. Ford’s timing right now, because she stated her facts 6 or 7 weeks ago! – and she isn’t to blame for these facts coming out in the past few days.

Instead, they are unethically rushing Kavanaugh’s nomination through to a vote (with 1,000 pages of documents unethically withheld, by Kavanaugh’s own colleague! – and the released documents were “dumped” the night before the hearings began, preventing any fair and thorough review).

Thus, the Repugnants have unethically created the current arbitrary time-crunch to try to cram Kavanaugh down the nation’s throat! Therefore, shame on them for falsely claiming Ms. Ford’s accusations are “an 11th hour” gimmick. The article rightly says that if this vital process was proceeding properly and thoroughly, Ms. Ford’s accusations now would be occurring in “the 3rd hour” not “the 11th hour.”

In sum, all the faults belong to Kavanaugh, Grassley, McConnell, the Rethugs, and Trumpster – not Ms. Ford.

Let me repeat that–two members of the opposition party (one being Feinstein) couldn’t convince her to come forward (Ms Ford’s choice, which I disagree with but respect) yet a lawyer could in very short order.

As for the Republicans, whom I detest: They have every right to play political hardball on who does or doesn’t get a hearing, and what the hearing and voting schedules are when they control Congress, which is the primary reason I disagree with Ms Ford’s timing. The opportunity for the Rs to accuse her of being behind an eleventh hour gimmick was created by her when she waited so long to go before the cameras. Under the circumstances created by the ruthless Republicans, yes, this looks like an eleventh hour gimmick to Trump voters–that’s reality.

Now, happily, in the end Ms Ford will get her day in court. I hope she bears up well because the ruthlessness of the Republicans will be on full display. I also hope that someone learned a lesson about timing, because when you leave things to the last minute, you run the risk of coulda shoulda.

Joe is too old to run for president. Besides we need a progressive energetic woman in the WH.

Just like those opposing him don’t care one whit about the proof of any accusations against him.

Sexual assaults happen. Not all accusations of sexual assaults are real (see Rolling Stone in the Virginia case, the Duke lacrosse team). Let’s see the facts on both sides.

He’s been looking for ways to yell at Diane Feinstein for days (not that she’s never above criticism, mind you). He’s backed off some of his earlier outrage, after I quoted directly from the Washington Post article, and Dr. Ford’s attorney was very clear that Feinstein was quiet to respect Ford’s wishes. That said, per the Post, Ford contacted the Post in July but was unwilling to go on the record, about the same time she sent a letter to her Congresswoman. She decided to come forward after rumors swirled and reporters started looking into things.

Life isn’t always clean, but he plays the Republican game of “Dr. Ford came out too late, DiFi should have pushed her to come forward earlier” (he’s modified this a bit and is more equivocal on that last point). As I have pointed out repeatedly though, there is no late, except that Republicans want a vote before November elections. The Judiciary Committee can hold additional hearings, wait for an FBI review of the allegations, and reschedule a vote anytime prior to the beginning of the next session. Hell, it can continue the hearings into the next session if it wants to. This has been done before, plenty.

Thanks for bringing this important view of the case to us…many might have missed it! The piece makes many very relevant points to counter the depraved indifference and obfuscation of the R’Con right!
The great courage and moral compass Blasey possesses and now displays, is a universe away from that of the supporters of the nominee…a nominee that should never be confirmed and in any moral or normal time would have never even be considered, as his qualifications are patently and clearly hyper-partisan extremist…We now live in a bizarro world where the most reprehensible and immoral people seem to rise to the top…like scum in a polluted pond…like the nominee, Grassley, and Hatch.

I hope to the Goddess Blasey will get some other witness, or a person at that party will come forward to support her in her hour of need!

I will also re-post SaveDemocracy_SaveLife’s link. 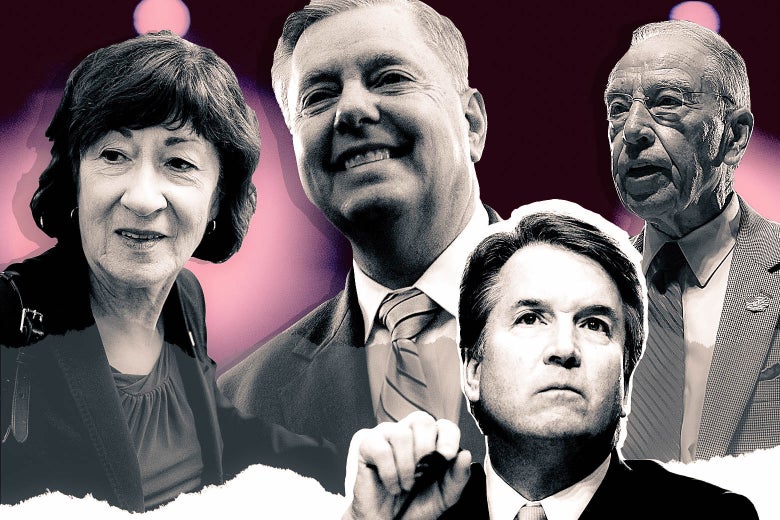 It’s worth considering who gets to decide that we’re in the eleventh hour at all.

I agree that the idea of an “eleventh hour” in Supreme Court nomination hearings is a complete fantasy.

It’s literally a timeline based around an election and nothing more. It took Obama 121 days to seat his Department of Labor nominee, and 161 to seat his Attorney General in his second term. I think adequately vetting a lifetime appointment and allotting additional time to do so is perfectly fine.

The situation here involved a variety of information that wasn’t made public - principally records from Kavanaugh’s time in the Bush Administration - so delay was also warranted on other grounds. However, the vast majority of Supreme Court nominations go from nomination to result in under 3 months (Merrick Garland aside). You can find complete data on every nomination in the history of the republic at
www.senate.gov/pagelayout/reference/nominations/Nominations.htm

Does it matter if it’s a fantasy? Ms Ford is being attacked for this anyway, and frankly the optics of last minute revelations suck. Do you think the ds would leave that unmentioned if it happened to one of their nominees?

If that doesn’t matter, wonderful. But I suspect the questioning on her timing will be pointed. Sadly, this is ‘he said, she said’ politics, not beanbags.