No one thinks it's funny that John Bolton, who vociferously supported the invasion of Iraq and has called for the bombing of North Korea and Iran, will be America's next national security adviser—except, apparently, Defense Secretary James "Mad Dog" Mattis.

Meeting Bolton for the first time in Washington, D.C. on Thursday, Mattis joked, "It's good to finally meet you, since I've heard that you're actually the devil incarnate."

Every time I see Bolton I upchuck a little

There are many Devils in this administration.

Bolton, Mnuchin, DeVos, Mulvaney, Pai. Some of the worst people in the world, all hired by this asshole president. What type of rotten political system results in these creeps running the show, and how utterly horrible is the opposition party that they can’t beat these vacuous monsters. Oh well, the recent Democratic nominee for president will be meeting with the Saudi Royal Prince. Maybe she can have a drink with her friend Kissinger, catch up a bit.

Like rain on your wedding day,
Like a free ride when you’ve already paid
Like some good advice that you just didn’t take
Isn’t it ironic
Just a little too ironic

Joan do you ever get the feeling that our ruling elites want warmongers only to “lead” this country? We have Trump, probably the stupidest president of all times (the future is hard to predict but it seems like it will take some effort to out do the Donald when it comes to low IQ) who’s chomping at the bit to start wars with Iran, China, and North Korea. Our other choice of course was Sir Hillary who wanted to start a war with the Russians. Frankly, it seems like the ruling elite either want to rule the planet or if they can’t then sterilize it. The old ploy of if we can’t have it nobody can. Perhaps they have a belief that their luxury missile silo bunkers will protect them while they depopulate the earth. They seem to be overlooking radiation contamination and nuclear winter. Little do they know they will be included in their sterilization or depopulation effort, but money never has increased brain power.

With a little chuckle in his voice Mad Dog prepares to water the sands of Petrostan with the blood of those trapped in an economic quagmire, desperate to grasp at any strands of hope dangled their way. USA! USA! USA!

We need Petrostan to ensure the continuation of the petrodollar system. Should that collapse the SHTF.

I don’t think it is possible for a developed society and a political system in a developed society to perform worse than this one. On almost every level, our policies are horrible and would be unacceptable in most other countries. We have set up a system that provides incentives for people to do bad things in order to rise in power, and so it attracts people with particular skills. It helps to be a sociopath. In this system, if you are a sociopath and you have skills that can benefit people with lots of money and power, you’ll do really well. If you have empathy for the poor, empathy for working people, want to actually avoid the environmental crisis, you will have a tough time in this system. We either need to radically transform it or replace it, cause moderately changing it isn’t nearly enough. Our problems are structural.

Concerning war, the military industrial complex - which is really what this thread is all about, I just saw a netflix original movie, based on a true story, very accurately told and well acted to boot, which I think you might want to see - and to consider.

What we have here is revisionist history, long overdue, from 1961, JFK in office, Dag Hammarskjold Secretary General of the UN - and big money and strategic resources (uranium, cobalt, copper…), in the Congo - Katanga province.

There is nefarious work at the top - an Irish general, an Irish academic, and then there is A company, until lately dishonored, all in the name of political ‘reality’.

I think it adds perspective - this type of thing has been going on for a long time.

Dag Hammarskjold dies in a mysterious plane crash - flying to the Congo for a boots on the ground look at the situation.

Absolutely a must see if, like myself, you were not already familiar with this story:

The Siege of Jadotville | Official Trailer

Siege of Jadotville From Wikipedia, the free encyclopedia

Thank you for the information, Michael. I will certainly check it out. I was in High School at the time, and remember well the death of Hammarskjold, as well as Lumumba’s.

We who lived through those times, I think, have a basis for understanding, as we look back at it, just how much our obsessive fear of “Communism” was used as a cover for decades of war and subterfuge.

As we watched the Post-9/11 stoking of irrational fear, leading as it did to acceptance of torture, and the erosion of personal liberties codified in the "USA Patriot Act, as well as the illegal and unnecessary invasion of Iraq, It sure felt familiar, didn’t it? It was as if we’ve seen
this movie before, only the sequel is even worse.

What is “A” Company? That reference didn’t click. I should probably know, but I just can’t pin it down.

stupidest ??? have you forgotten the village idiot bush already.

I just watched the entire movie again - to firm up the details in my mind John.

I was a Sea Cadet, and might well have ended up in Vietnam as a Marine had I had my way. And I am half Irish, and my Irish cousin was in fact a Marine, as was my father.

I am very much afraid my opinion of academics and most politicians is not doing well, especially seeing this ‘Siege of Jadotville’.

As for “A” Company - here is the quote from Wikipedia"

The outnumbered Irish company was eventually forced to surrender after ammunition and supplies were exhausted, but not before inflicting heavy casualties on the Katangese and their mercenaries. They were held as prisoners of war for approximately one month, with no loss of life.

Siege of Jadotville From Wikipedia, the free encyclopedia

Everyone keeps repeating the line that Bolten is very smart, “very intelligent”. No, he isn’t. He is a bombastic loudmouth, a cult preacher, that can sell pots and pans to the stupid. His logic and thinking is so full of horse manure that the pile is at constant risk of spontaneous combustion.

"Two minutes to midnight: did the US miss its chance to stop North Korea’s nuclear programme?"

Now under the totally mental, extremist, trump regime, the Doomsday Clock is said to be two minutes to “midnight” - ie nuclear armageddon - I see that time rapidly diminishing under trump & his cabinet of extremist nutters, especialy the appointments of bolton and pompeo. And still millions go about their daily routines and ignore how low we have sunk. “Great again”? Not even close…

How did America produce such mental cases and how did their politics gain such power? One thing for sure, the wisdom and wide education/experience that once was, is no more… 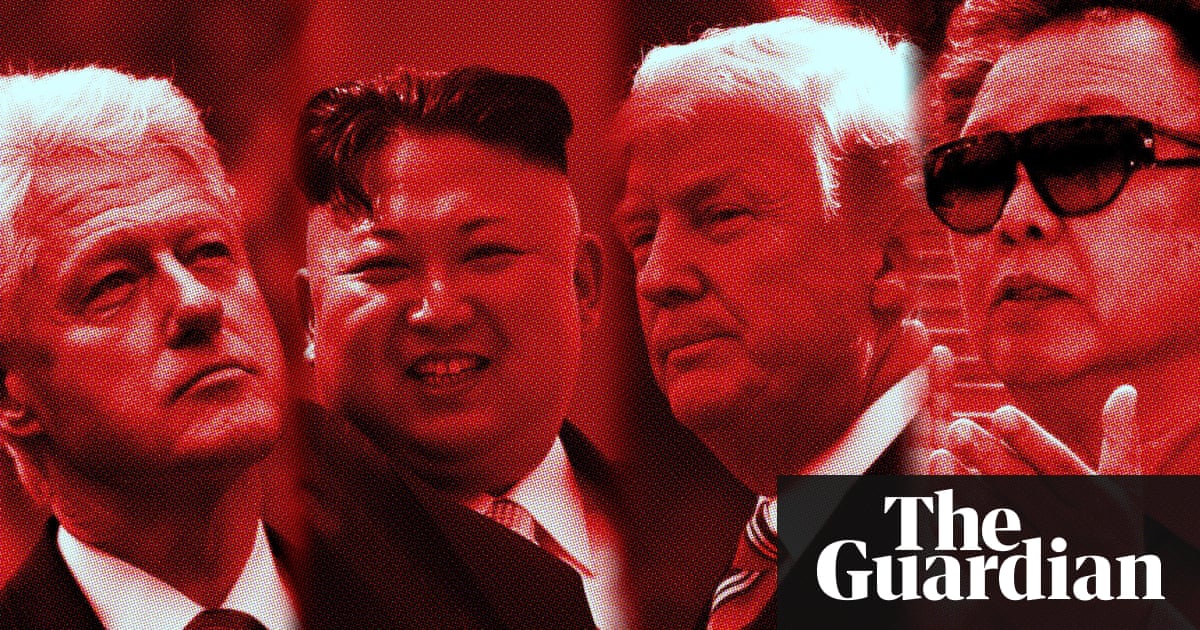 Two minutes to midnight: did the US miss its chance to stop North Korea’s...

The long read: An unprecedented US mission to Pyongyang in 1999 promised to defuse Kim’s nuclear threat. But it all came to nothing – and then the hawks took powe

That’s because everything is predicted on money.

anyone who tried to promote peace is in danger.

And I believe it’s why it is nearly impossible to find anyone decent who will run for office at the highest levels, especially if they are ‘can do’ types.

Either JFK and his brother were naive, and underestimated the power of their enemies, or they were extremely brave - to the point of sacrifice. Same for all the others you mentioned.

If one sums it all up - I think only a state shift in the planetary system can re-set things politically.

But I could be wrong ?