Some 1,220 people were arrested in France on Saturday as more than a hundred thousand took to the streets—leading to a lockdown and armored vehicles pouring into Paris—as part of the "Yellow Vest" or "Gilets Jaunes" movement that initially came as a response to French President Emmanuel Macron's attempt to raise taxes on gasoline and diesel, which critics warn would primarily impact the working- and middle-class.

The population of the planet increases at three additional people per second.

Habitat overshoot is a thing.

There are millions of refugees right now running from habitat collapse due to climate change.

Childless and proud of the decision. I am no hero, though, just a contemplative person. When I take my daily walk with my hound through the natural areas that have been preserved by progressives in my region, I feel solidarity with the creatures with which we find simpatico. This land is your land…

Why go to school if there is no future? 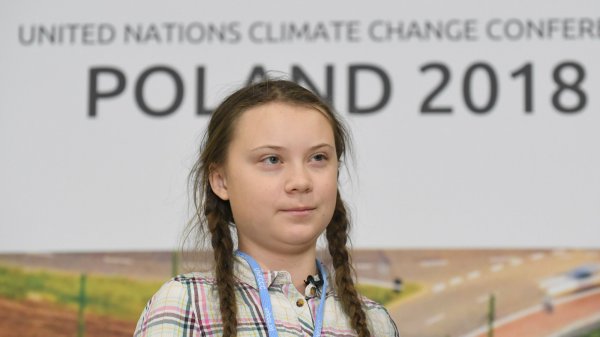 This badass 15-year-old just stood in front of a bunch of world leaders and...

"Our leaders are behaving like children," she told the UN summit.

I have no axe to grind here and population is not one of my deep concerns although it probably could be. It just dawned on me that parents love their children in this country and those privileged to comment here were born of a woman themselves. That being said, what dawned on me WiseOwl is that while you are walking your hound there are thousands being put to death from overpopulation at the same time. We allocate resources, water, food, living space that could be used by humans. It’s always in the perspective that things get foggy.
After our first pouch (Argus) died we decided there were too many dogs around, two next door, one along side that barks all day, one across the street in both houses side by side. Who knows how many cats.

Not one peep in the so called land of the brave, and the french are 50X better off than Americans. Americans are just gutless Tur_s apparently.

Are you saying the purpose of all wildlife is for use by humans?

That means we should cram as many people we can on this planet because heterosexuals are just too lazy to do anything about it, and it’s all about shopping for stuff anyhow.

Tear down those wildlife parks and put up playgrounds.

Just when you put things into perspective our treatment toward our pets should considered along with other overpopulation statistics. PEACE

Listen all humans are our family.

One for all and all for One.
All nations must unite into a world federation. All resources must be shared, end individual ownership of the world’s resources. They rightly belong to all of us .

There is no leader of the movement and no particular cause. If someone wants to excuse this violence with 7c tax, go ahead but any reasonable person would laugh at that. I would not be surprised if it is fueled by Russian bots.

Good point. It may also be fueled by this:

Inside Bannon’s Plan to Hijack Europe for the Far-Right

Bannon is moving to Europe to set up The Movement, a populist foundation to rival George Soros and spark a right-wing revolt across the continent.

Despite what Glenn Greenwald asserts, the NY Times appears to be accurately describing the cause of the unrest rather than blaming it all on a tax to address climate change. 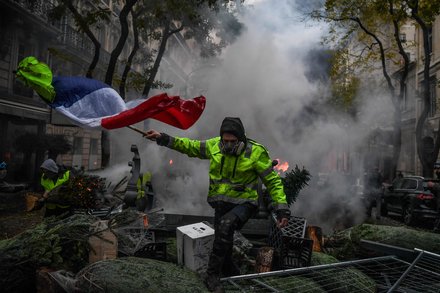 These protests are more akin to the anti-Wall Street than to the right-wing nationalism seen elsewhere.

We need to follow the French and free ourselves from the slave laborer like the serfs in the service of the feudal lords. We have to apply austerity measures to the thieves of our livelihood. Overpopulation is an issue but so long as the people remain complacent slave we cannot implement the neccessary changes. A fair distribution of wealth is imperative to an intelligent society. That’s when people can stop human population growth.

And this was why the left case for Brexit (and other -exits) is so vital. While the cruise missile “left” frets over nationalism, the larger enemy was always the EU Banker Superstate. Neoliberalism is the primary enemy of humanity on the planet. No progress is possible as long a the global architecture for financier rule remains in place. If it means forging alliances with “nationalists”, so be it. This beast must be broken down into smaller components in order to be defeated, and that means, by default, nation-states. Greeks, Italians, Spaniard, and the English have led the way. We must follow them into that trench and take them down, just as the French are trying to do. We can win. But the left must abandon the 19th century context that informs it internationalism and embrace the reality of the 21st century. We can deal with nationalism later.

So true, I loved every word

Soon you will be advocating forced sterilization. Why do I say that? Because while you rightfully recommend vasectomies you ignore the simple fact that it’s the radical redistribution of wealth to a small degenerate mob at the top of the economic system that is causing the suffering for all those below. Perhaps we should start by neutering the masters of neoliberal exploitation instead of the victims? One of the side benefits would be reduced birth rates that occur in modern stabilized societies where families aren’t desperate. And by the way, I hope you are neutered already so you can set an example.

Minus the elite thugs we can and should NEVER have elites or hungry or homeless.

Would that it were that simple.