Anti-nuclear weapons advocates urged caution after Russian President Vladimir Putin's statement about his military's new nuclear capabilities and his plans to put them to use in the event of an attack on Russia.

The International Campaign to Abolish Nuclear Weapons (ICAN) stressed that the United States has contributed greatly to rising global tensions regarding nuclear proliferation, and touted the international treaty the group helped to negotiate to end the use of nuclear weapons worldwide.

" Postol said. “It has issued a Nuclear Policy Review (NPR) that makes it clear that the U.S. could choose to use nuclear weapons first and at any time.”

Folks, I hate to be an alarmist, but from my perspective, and I hope like hell my perspective is wrong! But I cannot see it any other way. Because of the US nuclear policy of a preemptive nuclear strike it looks to me like we could be on the eve of a nuclear war; ESPECIALLY, SINCE WE NOW HAVE AN INSANE COMMANDER IN CHIEF, THAT HAS SAID: " WHAT GOOD ARE NUKES…IF WE DO NOT USE THEM"!

Please someone, show me I have got it wrong!

I share your alarm and note that when this President Strangelove said why have nuclear weapons if you are not going to use them he did not mean we should rid ourselves and the world of this menace. Unfathomable that he and his loyal chorus have such a death wish. This tells me they have no knowledge of life, livingness.

I wish I could.

It was never this nutz.

Madmen are running the most powerful countries in the world, with their fingers just millimeters from the nuclear buttons. We have an absolute fuck-twit running the US, who is just itching to use the nukes under his control, and he is so unpredictable that everyone on the right and the left are crossing their fingers and relying on the military leaders under his command to ignore any orders he gives for a nuclear first strike. And his counterpart in Russia - who may or may not have influence over him in some form or another - apparently has just as itchy of a trigger finger, mostly due to the threats and ravings of the first fuck-twit. Add in the proliferation of nukes all over the globe - by other madmen like N. Korea, or unknown elements like India/Pakistan/China, or possible wildcards like possible terrorists acquiring them. Then throw in all of the “near-disasters” and false alarms and other mistakes that happen more frequently than people realize, and I am genuinely worried. Alarmed. Freaked-the-fuck out.

I don’t see Putin as a “madman” in all this. For many years, mutual assured destruction has been considered a force to prevent nuclear war. Of course, getting rid of all nuclear weapons is a better choice, but that’s not going to happen.
So the US comes up with a new approach, saying they’re willing to use nuclear weapons, even against a cyber attack, which forces Russia to improve their weapons to keep mutually assured destruction in place.
Please read some non-MSM articles on Putin, and listen to what he says. He’s certainly not a madman. A madman would have had Russia at war with the US by now, if only for NATO surrounding Russia with nuclear arms. Can you imagine the American reaction to Russia surrounding the US with nukes?
Remember the Cuban missile crisis?

BTW, my response should have been to “dissent”.

I don’t consider Putin a madman either. Perhaps I should have clarified that. I did say Putin has an itchy trigger finger, due to threats and ravings coming from Trump. I.e., it is the US provocations that are making Putin nervous.

Good roundup of what Putin actually said as well as a link to his speech with English subtitles at Moon of Alabama.

Sorry, but how is the intensification of the hostilities between Russia and the US not largely on the US media, the “liberal” hawks and their new friends, the neocons? Look at the insane rhetoric coming from the Democratic establishment, forget why they are doing this bullshit. Yeah, Trump being an incompetent buffoon is an issue, but it’s an issue because the right wing hawks in both parties are creating a massive situation that doesn’t need to be created. Trump being president just makes that all the more illogical.

By the way, Clinton (in addition to her campaign and the DNC deciding to blame her horribleness and her loss on Russia after she lost) was ramping up pressure on Russia during the election. She proudly shared the stage with Kissinger, was proud to have the support of a bunch of neocons and closely aligned with war hawks like Nuland and Kagan. Why are people missing this and focusing entirely on Trump? Yeah, he’s horrible, so why create an insane, unnecessary escalation with him in office?

Yeah, Trump is a madman, and Putin is horrible too, and so are the neocons, and so are the liberal hawks with their insane, reality-less propaganda. This Russia, Russia, Russia bullshit from the Democratic establishment increases the madness and the tensions, and these idiots are doing this with an incompetent monster in power. The madmen and madwomen aren’t just Trump and Putin, it’s the Democratic “liberal hawks”, the neocons, the damn US media and the foreign policy establishment as well. They’re all out their minds. Want to focus your anger on people in the media ramping up tensions, for insane reasons? Rachel Maddow and Joy Ann Reid (who said that she finds herself increasingly agreeing with neocons) would be a nice start.

Hey, thanks for the link. 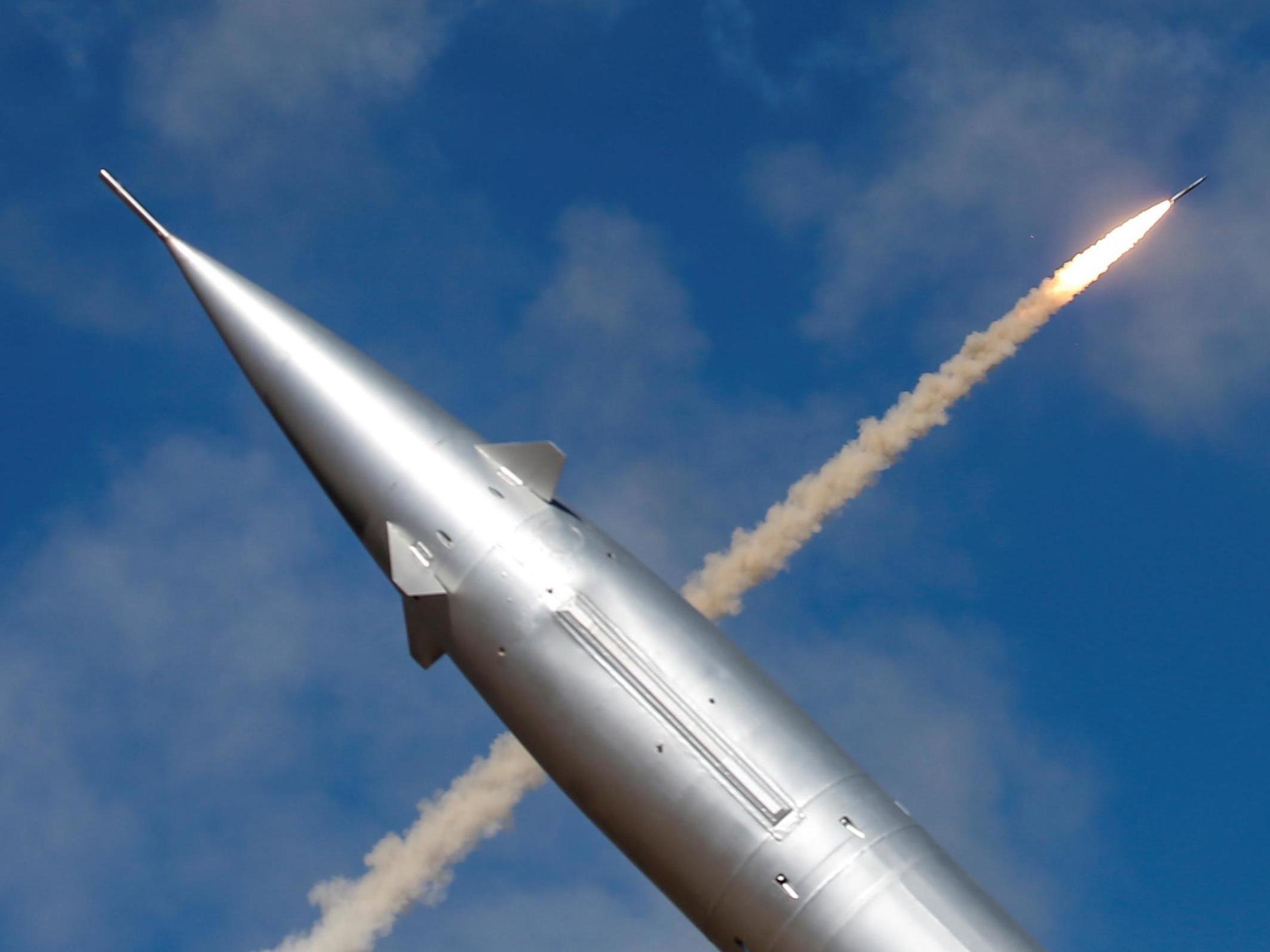 Russia is developing a series of nuclear weapon systems, including a new supersonic cruise missile capable of overcoming Nato defence systems, Russian President Vladimir Putin has claimed.  In a belligerent state of the nation speech delivered to...

We’re focusing entirely on Trump because he’s the current President.

True US responsibility for the continued cold war lies squarely at the feet of the Military Industrial Complex and ALL of their Washington DC-based enablers - 95% of both political parties.

If we didn’t spend so damn much of our money lining the pockets of the worlds’ most prolific arms dealers (Lockheed Martin, Boeing, Raytheon, General Dynamics, Northrop Grumman, etc.) the rest of the planet - Russia included - might sleep a little easier.

Add to that list America’s greatest ally in the ME…

Not sure what else Putin could have done. He’s dragged his heels in his responses to provocations for years, but he’s got an electorate to account for, too. The US has been puking out nuke threats since Obama’s modernization push, and Trump’s reckless rhetoric just ratchets up the pressure cooker since he thinks he can basically threaten everyone with nuclear annihilation.

Still, some weapons makers are clapping with glee at this kind of news. A race for weaponry is always their holy grail, and I’m sad that Putin finally felt he had to give it to them.

Thank you, I can’t believe I left that one out!

Agree. And Putin warned, way back in 2008, that the U.S.'s pulling out of the ABM treaty, expanding its missile shield right to the borders of Russia/China, etc, was going to force him to respond.

The US empire’s establishment really has no idea what to do in the presence of a true leader guiding a truly sovereign (i.e. not puppet) state–especially one with a formidable supply of nuclear weapons. Like him or not, Putin is Russia’s best hope at the moment. He is not the rabid dog portrayed so often in the M$M, but rather a Russian patriot with vision and patience. Finding common ground with him should be the call of the day.

I don’t entirely disagree, but the establishment in both parties is creating a situation that is insane and is unnecessary, and for what? If Trump is incompetent, ignorant, stupid and corrupt, why make a situation like this worse? The story on this issue isn’t Trump, on many others it is, at least in part. On this issue, the tensions have increased because of the neocons, the liberal war hawks and the US media. Long past time the left confronted them and this Russian bullshit. Trump is certainly corrupt, probably has ties to Russian interests, has helped with money laundering and tax evasion (in all likelihood), and he’s probably done at least as much with countless other countries, Wall Street and other powerful interests. The focus on Russia given the wider context is absolutely insane.