A new sustainability index found that roughly three-quarters of the of the world's largest meat and fish suppliers are failing to manage their contributions to worldwide antibiotic resistance as well as their contributions to the climate crisis, "putting the implementation of the Paris agreement in jeopardy."

The title says it all… and then some. The entire dominant western system is predicated on highly selective modes of attention. If I like it, it is real. If it in any way does not add to my egoic manias, then … its someone else’s problem. Great way to amass piles of shit, systematize rapacious extraction, deny consequences and that extra goodie so very worth pouring your resources into: marketing. Why? Gee… maybe someone can explain that some day.

The system has internalized its own perverse version of the hated ‘hammer and sickle’. First it projected vile, demon-like profiles, then it convinced the “public”, then it killed the chimera it created and like a hollywood parasite (sorry, that’s redundant) morphed temporarily into a vampire to speed the internalization. No wonder the latter is such an icon these days. The media hammer never stops and death itself runs a distant second to the scythe actions of the systemic distortions.

Timothy Leary was right: Tune in, turn on and drop out. Hell, you don’t even needs drugs at this point. The ‘rat race’ is in deep spiral mode down the commode. Never has local, community, recycle, rethink: ‘simplicate and add lightness’, to steal advice from an early aeronautical engineer. And as the Quakers put it: Live simply so that others can simply live.

No animal can live in a feed lot ankle deep in shit without drugs and pollution. Organic peas, beans, rice, green vegetables and corn require less land than beef. Good food raised with good work on a healthy small scale at home on family farms will help relieve environmental pollution and climate collapse.

Corporatism and the uneconomic pollution of life for an elite wealthy few will soon change if humanity is to continue on Earth. 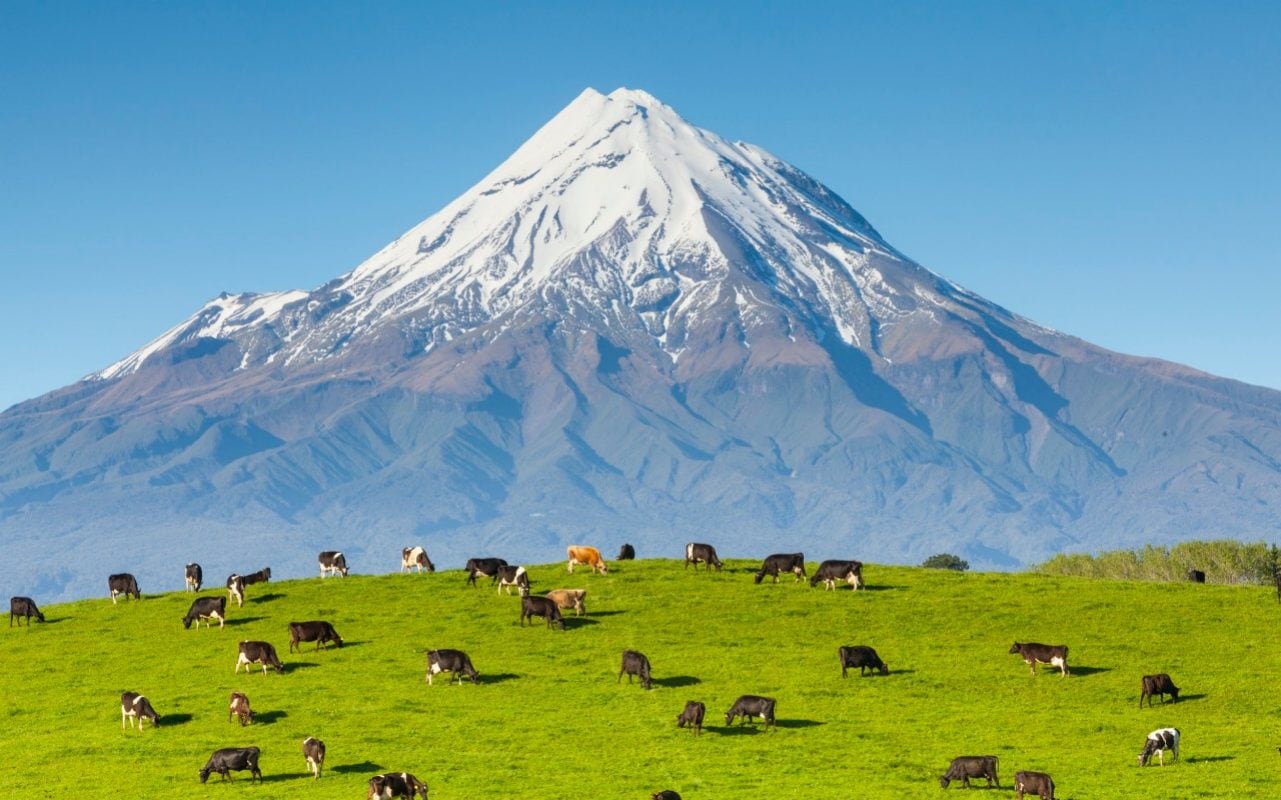 New Zealand plans to slaughter more than 150,000 cows to eradicate a disease-causing bacteria that is threatening cattle in a nation which has long avoided mass outbreaks due to its isolation.

“This is where governments need to step in”
This problem is the result of governments stepping in, at least here in the US. For years the Dept. of Agriculture told farmers to “get big or get out”, ignoring the benefits to the environment and our food production from small family farms. Small producers care for their land and the products they produce, corp. farms care about their bottom line, money. This article and others like it show the results of transitioning to large corp. farms.

Malthus thought that humans are doomed because population growth is exponential and the ability to produce food increases linearly.

The reason for factory farms is that the only way to feed an exponentially growing human population is to increase food production. If you want family farms to feed people, the population will have to be at the level that existed before humans discovered factory farms.

Henry Ford realized that he could produce far more cars if he used an assembly line than if each car was built by hand. Similarly, if your business is to make money selling agricultural products, you will opt for factory farms.

The only way to get rid of factory farms is to reduce the population of the world first. If you don’t and you ban factory farms, the result will be mass starvation.

The Bible says: “Be fruitful and multiply.” But the only way to support a growing population is to dominate and subdue the earth. Tell me, how are you going to convince all those devoutly religious people that they should not try to produce as much food as possible to sustain a growing population?

I agree with you with respect to meat calories per dollar - large corporate factory operations are much cheaper than modest size family operations at producing meat. But that isn’t what is by being advocated for in the article or posts. For that we need to discuss fruit, grains, vegetables, and nut production per acre and ask if smaller family farms can be as efficient or even more efficient per acre.

I skimmed https://grist.org/food/do-industrial-agricultural-methods-actually-yield-more-food-per-acre-than-organic-ones/ and it sounds like the answer isn’t obvious. On one hand smaller farms have owners that are trying to squeeze the most out they can regardless of extra labor input perhaps. The story discussed this dynamic in Africa and it is significant - smaller farms have better yields. Here in the US where we essentially eat oil (by using oil to create fertilizer), it is harder for an organic small operation to hit the same yield on the short term. Of course long term we are going to run out of oil so we better learn to farm the right way soon or the collapse will be that much more painful.

Oh and yes - we need fewer people too. 200 million here in the US and 3 billion worldwide would be some reasonable targets. If everyone had 0, 1, or 2 kids we’d get there in 3-5 generations. But some people just don’t get it.

You have perfectly summarized the argument against having a younger generation ready to take over from average age 65 year-old farmers. You state as fact something that is an ideology with no proof anywhere in fact.

Seventy percent of food is still raised by post caveman tricks of the trade.

To be clear, the arguments against the existing meat industry that Jessica Corbett makes are pretty good. It’s just that factory meat and even most traditional systems are not cheap ways of getting meat–at least not in terms of real cost.

With a little help, my rabbits and hens eat the weeds, scraps, and bugs that are products of my garden. When I make some mistake in planning, which does happen, I have to buy some supplementary feed or get scraps from neighbors or local food businesses. The animals, meat included, are now very near to free.

Of course, eating the animals means killing them. So anyone may wish to weigh in about ethically about that. But ideally, that response might include some consideration for the animals killed by removal of habitat by other human farming, since it takes somewhat more land to support a vegan diet than is required for a holistically managed omnivorous diet.

(It does take far less for the vegan diet than for the current factory farming system, by the way; I don’t mean to demonize vegans, who make a compromise that is good and viable in some circumstances).

To generalize, though, less destructive ways of raising food involve having various species, even many species, in one place. In such a system, a fair amount of the living biomass consists of photosynthetic plants, since these are getting the initial energy input from the Sun.

A large percentage of most photosynthetic plants is cellulose–complex sugars, woody or pithy materials. Humans cannot digest such materials, though we get some benefit from eating some of them anyway. However, many other animals, particularly dedicated herbivores, digest them very well. The animals do the general ecosystem a grand favor by converting the product of that cellulose to manure that feeds soil microbes and then the plants.

And humans digest many of these animals reasonably well. Voila–that’s cheap meat. Of course, if you insist on trucking in soy and corn and so forth to feed them, if you keep them wading in manure and shoot them full of antibiotics and chemicals, then they become costly. And of course that describes most of the existing US and international industry.

Allan Savory (holistic management) is very interesting with respect to integrating animals in food systems, as is Bill Mollison (permaculture).

I blame the CONSUMERS of meat, dairy and egg for supporting these industries and making them profitable! And the oceans are being devoured to death.

Watch documentaries: “Earthlings,” “Cowspiracy,” “Forks Over Knives,” “What the Health.”

Being vegan, non-GMO, and organic is the only ethical dietary choice.
Anyone who eats foods taken from animals is complicit in torture, pollution, and slaughter.

You lie. Using animals for food isn’t necessary.
Being an omnivore is to be complicit in creating cruelty and suffering for other sentient beings.
Stop shilling for death.

You are absolutely correct that human population is way too high and is a mass extinction event.
The worship of fetuses and human birth is killing our biosphere.
Every human born is one more consumer and polluter who ruins our living earth.

It is not necessary for everyone, including almost all people with a reasonable income in any post-industrial society. Not everybody fits that profile. Not everyone has enough food or enough variety.

Moreover, purchasing vegan food through the usual grocery stores and supply chain kills way more animals than does raising one’s animals and killing some–if the latter is done at all properly. This is because raising animals properly can be part of creating habitat instead of destroying it, and involves many living beings that one does not harvest–and because all sorts of food that comes through the factory supply chain comes from practices destructive of habitat.

If one is to buy one’s food through the factory farm supply chain, however, going vegan does save not so much the animals that one would otherwise eat as those that might have a chance to inhabit the fields on which fodder is grown to ship to animals for eventual consumption. Raising foods that humans could eat to feed animals who could eat other food causes a great increase in the lands that have to be directed towards human consumption–so you vegans are not all bad, by any means.

If you feel you have an ethical revelation to make, that’s fine. But it comes across as more shallow than your likely motivations if you do not bother to address the arguments that have been given. It gives the impression that you do not wish to bother to take the time to understand.

But probably your motivations are sincere enough, so it seems reasonable to direct you to a couple of issues. If you have looked at the following, how might they be addressed by vegans?

The quail and rabbits rooted out of a field that one plows to grow vegetables or grains have eyes and had mommies and die just like domestic animals.