'Not Mere Misers, But Actively Cruel': Trump's GOP Denounced as Worse Than Scrooge

Again, I have solution for this, an answer on how to deal with this level of cruelty, but it requires us to stop seeing the Extreme Right and their Corporate Criminal Friends as human beings. They are not human. They are animals devoid of human reasoning and human empathy. The sooner we take that line of thought to its logical conclusion on what must be done to the Fascists and act on it, the better…

Republicans defend this by saying that keeping people hungry will make them work harder.

Folks: THE REPUBLICAN PARTY NEEDS TO BE DESTROYED!

Good analysis, except it would be great if Krugman and his ilk would recognize the blatant truth that their beloved Democratic party has long since been infiltrated and taken over by people who used to be known as Republicans. Recall Obama’s praise of Reagan, and his acknowledgement that he would be known as a moderate Republican of those times.

It’s as if the Republican party of the 1980s had been renamed the Democratic, while that era’s Democratic party had been replaced with the NAZI party calling itself Republican. And none of these pundits can bring themselves to acknowledge one side of that switch.

You got half of it right Jon, “heartless misers.”

While we’re at it, might as well destroy the “Republican Lite” side as well.

They are animals devoid of human reasoning and human empathy.

They are “scum sucking pigs”.

While we’re at it, might as well destroy the “Republican Lite” side as well.

After the Republican Party is destroyed and gone the way of the Whig Party…THEY ARE NEXT!

While Scrooge’s wrath was limited to London, the corruption and cruelty emanating from the one stop bribe shop on the Potomac negatively impacts the 99% in every nation on earth.

In 2004 when referring to Wall Street’s relationship with Washington DC, Senator Dick Durbin (D-Illinois) noted that “they own the place”. Wall Street’s ownership of gubmits in the US and abroad has been growing during the subsequent decade and a half.

Trump is just Wall Street’s current cheerleader and will likely be succeeded by an even more cruel cheerleader.

I prefer to imagine Trump will be replaced with someone with honesty and integrity.

An imagination is a terrible thing to waste.

Now, if only the 95% of the electorate who support the corporate parties woke up Christmas morning with an imagination, this country might have a fighting chance.

Now the children Trump took from their parents are being used to name their relatives and family in the US so ICE can visit them. At least 10,000 of them. Trump’s base are whites knowing their are going to be outnumbered like they were in south. They also want cheap labor. They could care less what Trump is really doing with Putin and other Dictators. Trump could care less about them too except he knows what rings their bells.

Let’s not forget the homeless population which is on the rise all over the nation. It is a generalized fallacy that all these people are lazy addicts. They are a symptom of a sick capitalist system that abandoned them:

Christmas 2019: More than half a million homeless in America

At a time when the ruling elite is celebrating the continued rise in the stock market and patting themselves on the back for historically low unemployment figures, the number of people who are being thrown out on the streets is on the rise.

Trump had better hope that when he is carted off to prison he still has some money left. Because if he can’t buy the favor of his cell mates he is in for a long and bumpy ride.
Unless he gets the country club prison treatment of course.

My reply to Krugman’s column on Emperor Trump’s authoritarian control over the Republican Party and subsequent willingness to demand that cruel punishment be applied was the following: 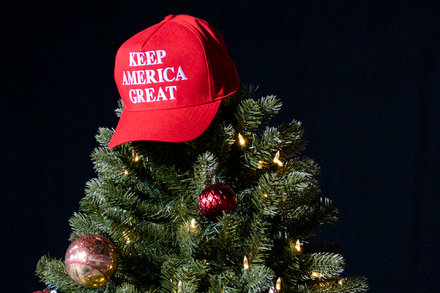 Opinion | The Cruelty of a Trump Christmas

But since CD doesn’t link to the NYT text of commentaries, I’ll supply my actual text:

Paul your humanitarian supposition is not only correct/'right’ on the question of intentionally inducing pain, cruelty, and suffering, on “others”, but it is actually proven by experimentation.

The proof of your thoughts Paul is called the Milgram experiment — which was performed at Yale (George W’s alma mater — you can’t make this stuff up):

The Milgram experiment(s) on obedience to authority figures was a series of social psychology experiments conducted by Yale University psychologist Stanley Milgram. They measured the willingness of study participants, men from a diverse range of occupations with varying levels of education, to obey an authority figure who instructed them to perform acts conflicting with their personal conscience. Participants were led to believe that they were assisting an unrelated experiment, in which they had to administer electric shocks to a “learner.” These fake electric shocks gradually increased to levels that would have been fatal had they been real.

“requir(ing) us to stop seeing the Extreme Right and their Corporate Criminal Friends as human beings. They are not human. They are animals devoid of human reasoning and human empathy”.

Unfortunately, would have the effect of turning us into animals also.

Far more non-violently and peacefully, the stolen, expropriated, looted, hoarded, monopolized, and taken out of productive use of wealth which was often created through the faux-profits of dumping ‘negative externality costs’ on others, our government, our children, grand-children, environment, and our entire “fragile little world” can and should merely be taken away from the UHNWI Ruling-Elites of the world — which is essentially as severe a punishment as treating them like animals or using violence against them.

The solution of “Wealth Reform”, I wrote more than half a decade ago, is very efficient and humane:

'We are the power to change the Empire into democracy. How things will work when 'democracy-thinking' rather than “Empire-scheming” controls the US government

How things will work when ‘democracy-thinking’ rather than “Empire-scheming” controls the US government:

OK, here’s what it involves and here’s also why it is essential to grasp the authority of the US government back from the EMPIRE to the People, and to get this (and many other corrections in the system done quickly):

Of course the only way to accomplish this non-violently is for the Green Party to overtly and loudly promote its true and unique platform to being the only Pro-democracy Anti-Empire Party — and also focus the attention of growing public disgust with both lying Vichy parties as totally corrupted and bribed by the wealthy (the "Economic Royalists) of the Empire — and campaign the Greeen Party as the only ‘party of the people’ that takes NO corporate, banking, media, extra-legal, or wealthy campaign funding bribe money! (let’s say any donations over $50).

I know it sounds like a dream world of real liberty democracy, equality, and justice to us now — but as Lennon said “Imagine” if the world was peaceful, and free of EMPIRE — we can do it if we organize and try!

However, it will not be long before the EMPIRE takes away even the currently useless ‘right to vote’ — which is only wasted today by voting for either one of the EMPIRE’s DUAL-Vichy parties!

Best to all the true 99% of Americans in the fast expanding ‘Pro-democracy Anti-Empire’ educational and non-violent revolutionary movement (and Green Party) against this deceitful and Disguised Global EMPIRE, which is “Occupying” our country and yet can’t so easily be identified as wearing Red Coats, Red Stars, nor funny looking Nazi helmets ---- quite YET!

@MichaelRiendeau
Animals are regularly degraded by humans. We should be less degrading, for our own humanity, and for our own animality as well, since we are obviously animals too:

Tweets About Abu Bakr al-Baghdadi “Dying Like a Dog” are no Joking Matter -...

The media has been overflowing with wisecracks about the absurdity of Trump’s praise for the Belgian Malinois, Conan, one of several dogs used to hunt Isis founder and leader Abu Bakr al-Baghdadi on October 26. On the one hand, Trump tweeted that the...

A quote comes to mind: " a communist is a Christian grown sober waiting for the meek to inherit the earth", Neil J. Smith, On the Ropes

It is neither easy nor by choice that human beings become homeless. Policies make it possible. Glad there is talk and policy proposals to address unaffordable housing.

" > The future belongs to the people, and gradually, or in one strike, they will take power, here and in every country. The terrible thing is the people need to be educated, and this they cannot do before taking power, only after. They can only learn at the cost of their own mistakes, which will be very serious and will cost many innocent lives."

Wall Street Democrats. Lightyears apart from Progressives. Merry Christmas. Trump and Republicans have not one good thing to say about uniting America. There are no fireside chats with Donnie, oh no, more like carpet bombing on Christmas. Perhaps we have lower to go before we bottom out. The Trump administration is one of the worst absolutely of all time.
Right after 9-11, Countdown and Keith had a live blog. It resembled this site enabling the exchange of ideas quickly. We should be thankful for Common Dreams. We should be thankful there is still fight in America. Dick Gregory said you can put a lid on a boiling pot like suppressing dissent and it will get real quiet, slow change, evolution but sooner or later the pressure builds up and the pot lid blows off and everyone in the room gets burned, quick change, revolution. We are nearing the nexus of pressure points. We are on the cusp of historic political and environmental change. I hope the Federation will intervene and save us from ourself. Gregory was lecturing at Kent State the second week of May 1970. Have a good holiday. peace.