One Year After Khashoggi Murder, Chorus of Demands for Saudi Govt. to Face Consequences

Evidence of murder within the Saudi Embassy, and arrest of those responsible, must supercede any Diplomatic Immunity. 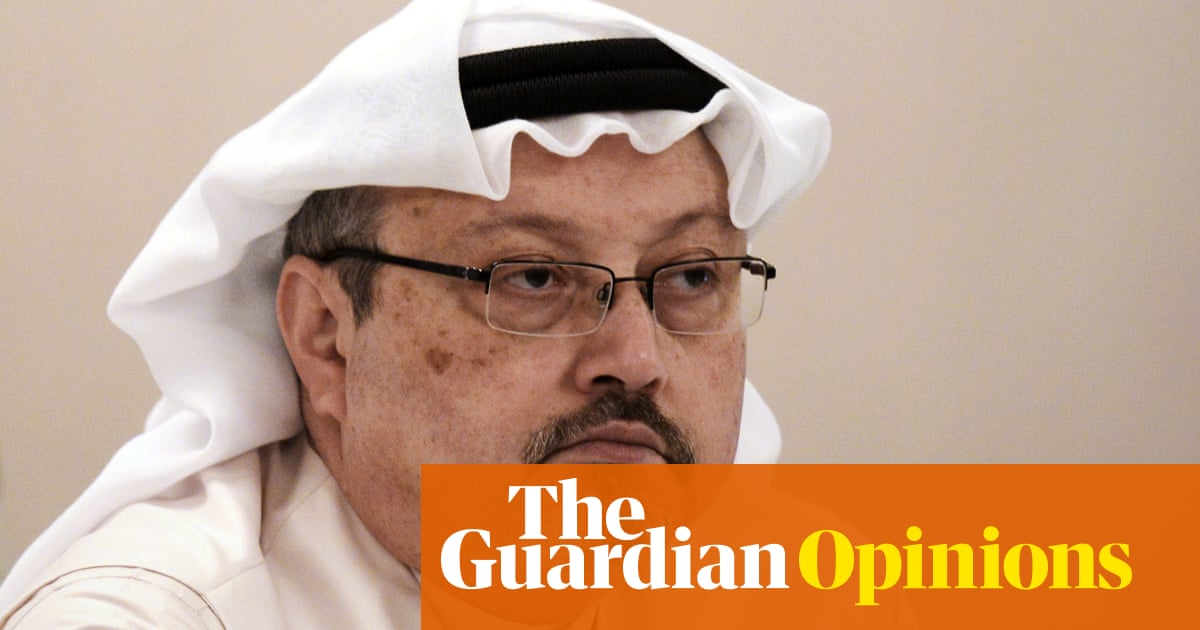 Silence still surrounds the murder of my fiance, Jamal Khashoggi. Who will...

A year on, no action has been taken about the killing. The Trump administration has much to answer for, says Hatice Cengiz

We continue to be helpless as our cops kill without abandon, and mafia style government rules the day.
Keep your women and children indoors, if you know what I mean.

I don’t know if you just saw Trump go on a hate filled rant on TV a couple minutes ago, but he’s losing it big time.

He’s most likely in a perpetual state of denial of reality, and will need to be removed.

I relish the thought, that he will be fighting when it happens.

Funny - our “law and order for poor and minority people” President gives Bin Salman a big pass. What a major hypocrite. I have an interesting observation about the Saudi government and their possible acitivities in the US. Several years ago I went to hear Medea Benjamin speak in Berkeley and I believe her topic was about a book she has recently written on Saudi Arabia. That night she was unable to sell any books as they had all been stolen out of her van in Fresno. Who would steal hundreds of books on Saudi Arabia from a van in Fresno?

I think it might benefit the world to dispense with the antiquated phrasing of “face consequences”. We 're well beyond paternalism- having suffered the inversions of such for too many centuries.

Investigate, publicly report and provide due process. All you independent investigative reporters - we’re reminded once again of why you exist and continue to be generated by this system!

The universe actually DOES FUNCTION on JUSTICE - a human attempt to configure guidelines according to universal principles. Human laws and structures are only so sound as the alignment of their premises with these principles. If nothing else, bringing this Saudi government to Justice will enable us to begin to see where the daylight streams through between practice and principle.

Hmmm… come to think of it, just about every government on the planet would benefit from such an exercise.

It will be interesting to keep tabs on that one

“A year has passed, but Donald Trump and his administration have done nothing to hold Saudi Arabia accountable for the murder of Jamal Khashoggi,” said Sen. Elizabeth Warren (D-Mass.). “He and his family deserve justice.”

To say nothing, Ms Warren, of Loujain al-Hathloul, Maysaa al-Amoudi, et al…who’ve been imprisoned and tortured merely for advocating for basic rights for women; nor for all the other pro-democracy political prisoners .

But then, U.S. leaders must step carefully when it comes to the rights of political prisoners, suppression of the free flow of information, etc. - mustn’t we. I mean with the bipartisan persecution of Assange and Manning, defamation of Snowden, the ongoing lawless detentions and extrajudicial but officially-sanctioned murders, i guess Warren, et al would set themselves up to be hypocrites if they venture too far down that road.

Perhaps she’s lucky they only stole her books. And didn’t spirit her away to the Saudi consulate…

Until his own party realises the chaos he is causing there will be no impeachment or REAL legal consequences for this man’s crimes.He will let the world burn before any rational thoughts enter his mind !!

Shakespeare asked “What’s in a name.” HA, what’s in initials is even better.
Let’s see…MBS------oh that’s easy MBS stands for Major Bull S*it!-----yeah that makes sense. People from Saudi Arabia bombed the World Trade Center, and I suppose that karma decides that Turn About is Fair Play too. Or maybe people around the world can mail bone saws to the prince…although this Price HARMING is not the least bit charming.

I believe strongly that his party knows and is complicit in the denial of the facts.

Well it really was disturbing to know that they might have agents in the United States willing to disrupt our freedom of speech. Think our government would come to the rescue if they did. Maybe the culprits were actually US agents acting on behalf of the Saudi government. Seems plausible. Connections to 911.

While multi-national corporations and filthy rich (crooked) individuals continue to grow fat on the proceeds of the criminal activities of the saudi ‘government’ (actually a dictatorship), we will never see justice for the victims of their violent activities. We need some western governments who are NOT in hock to the filthy rich manipulators of democracy. At that point we would be able to impose punitive sanctions against the saudis and tell them to eat their oil - nothing out = nothing in and when the ordinary people of saudi arabia see their government powerless, they will rise up against the despots. For the very same reason, we will never combat global warming while we have the likes of trumpty dumpty and bojo the bozo and others sucking up to these fascist regimes in order to line their own pockets. In the words of Karl Marx, " Workers of the world unite, you have nothing to lose but your chains ! " We need to stand with ALL the peoples of repressive regimes and tell them we are on their side and we will NOT allow trumpty dumpty, bojo the bozo and liar bolsonaro and their ilk to get away with their duplicity any longer. Stand up for humanity !

another example of the corrupting power of oil without which nobody would care about Saudi Arabia and they would have no power or resources to kill Yemenis or anyone else. Oil shows its ugly face - not just Saudi Arabia but on diverse places including Iraq, Nigeria, Algeria, Alaska, Alberta, Brunei, Ecuador, Libya, Oklahoma… Best to use less of it

You all know that Khashoggi was a CIA asset, right? The reason not much has been done about Khashoggi’s murder is because the CIA and Security State Apparatus don’t want too much said about him because it will lead to the exposure that Khashoggi was given the job at the Washington Post as his CIA retirement plan. The Saudis killed him to send a message to the lower level officials in the Saudi Government who may still be CIA assets that defecting to the West and living in the USA is not going to protect you.