She did the right thing. Precocious little critter.

And, in Greta’s own words, "No one is too small to make a difference."

I see Madrid has offered to host COP 25. That feels right, and I hope it comes to pass.

I wonder how Greta will re-cross the Atlantic ?

EnCana has moved their head office to the States. I was once an oilman - a consulting wellsite geologist. I say to EnCana - good riddance - and don’t come back. Your pathetic name has been changed to an equally uninspiring one. What a wasted opportunity, when you could have been the heart of renewable energy in Canada. Citadel Drilling has moved their six rigs south - also don’t come back. Foreign investment - keep it - I don’t want it.

Sorry, I’m always intrigued by the realistic bits, such as:

Malala, at the age of 14, was shot by the Taliban for promoting literacy in Pakistan. Following recovery, her remarkable story was told and she won a Nobel Prize. Pakistani politicians promised to make education a national priority. Seven years later, Pakistan still has one of the lowest literacy rates in the world.

Good on you, Shahid Mahmood. That’s called “follow up” (sometimes “memory”). A very healthy exercise for the human mind, imho. Unfortunately, it’s a pursuit which usually leads to the same nowhere: vicissitudes of life in the ossified senile global empire, where progress is invariably followed by retrenched repression.

Our western mass-social syndrome exhibits a little vortex right now tweaking a nearly mythological longing for the child breaking free of expressive repression and saying it out loud: the emperor has no clothes. Because we all know it. It’s a relief that someone has the latitude to say it.

This is in the context of quantum leaps in the infantilizing prowess of the agitprop machine every few years. Everything adult about our consciousness is stuffed into a dark little bottle far back in the cabinet, by the prevailing repression, and the cyber pseudoreality seducing us. As if a little screen you can swipe could replace an inhabitable planet. Look up.

'People are dying. Entire ecosystems are collapsing. We are in the beginning of a mass extinction. And all you can talk about is money and fairytales of eternal economic growth. How dare you!’

Greta’s message, and the struggle to really mitigate climate change, is a direct challenge to capitalism.

Point source pollution is that that comes out of a finite, relatively trackable number of pipes, smokestacks, etc. Non point source pollution, like millions of conservative Central Asian people, is harder to stop. Greta and other inspirational and educational activism have dramatically reduced the non-point source pollution, while the point-source GHG pollution of fossil fuel corporations, CEOs, bought politicians, etc. is now being targeted and can be changed.

Follow the money. Cut it off–not at the sources, which are dark and hard to trace, but at the destination–the politicians. They can be primaried, generaled, blockaded, shamed, forced to retire (Katie Hill was just forced to retire for something far, far less)… by activists.

Title this: Pain in the Ass Fine Tuning that Must Precede a Green New Deal. This Forbes article I’m linking below starts off OK, but the “demand deposit” Coppola wrote about is what the borrower owes AFAICS (after the quoted paragraph). The language I use is that (for bigger chunks, loans) the Federal Reserve will loan money ex nihilo for some project that will inject some valued item or service into the overall economy [the Fed’s not really “federal” to my mind; it’s quasi private]. Thus, the money created will eventually be backed by said item or service. The problems come with F-35s and 2008 style bank bailouts [why don’t these instances of money creation contribute to pure, raging inflation?]. This is the one blatant disagreement I have with Steve Pearlstein…in effect the money does come out of thin air. But I am writing here to direct you to all the other things he said on the Ralph Nader Radio Hour (2nd link, June 2019). Pearlstein’s convinced me there is fine tuning to be done prior to transitioning over to what I think of as real green, and he has what seem to me to be sound suggestions.

Yep, I want to leverage “civic engagement” toward a green chapter. As much as anybody. We can’t get there IMO unless a lot of socialist aspects are in the mix. And the steps to that require bunches of civic discourse in and of themselves. 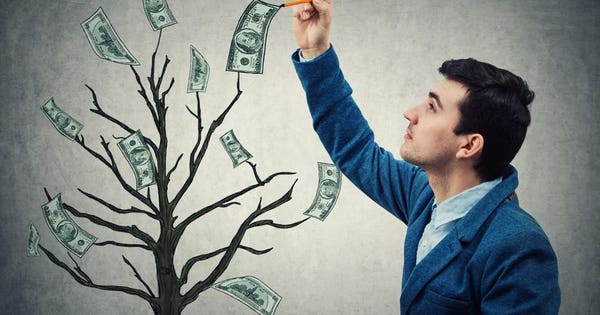 How Bank Lending Really Creates Money, And Why The Magic Money Tree Is Not...

The Magic Money Tree is back, this time promoted by Zoe Williams in the Guardian. But banks don't really create money "out of thin air", and there is no such thing as free money.

I actually like the painting this way. It is realism, and he painting as before was idealism. This is a major struggle facing the world today.

Greta is suffering huge counterattacks. But the movement she started continues and grows. Media outlets which wouldn’t touch global warming pre-Greta are opening the topic now. The picture shows this now.
In my eyes, the use of spray paint media illustrates plainly how punky her critics are.