Trump: “We are locked and loaded.”
Why?

Jeepers kids, cui bono? Well, aside from the Resnicks. Guess, this was what all the Venezuela agitprop at the “debate” was: VZ crude to mix with our tight oil? We’re locked, he’s loaded!

U.S. To “Drown The World” In Oil | OilPrice.com

New U.S. oil production is set to account for the vast majority of new crude supply as consolidation in the large basins, led by oil majors, ensures that drilling will continue at a steady pace 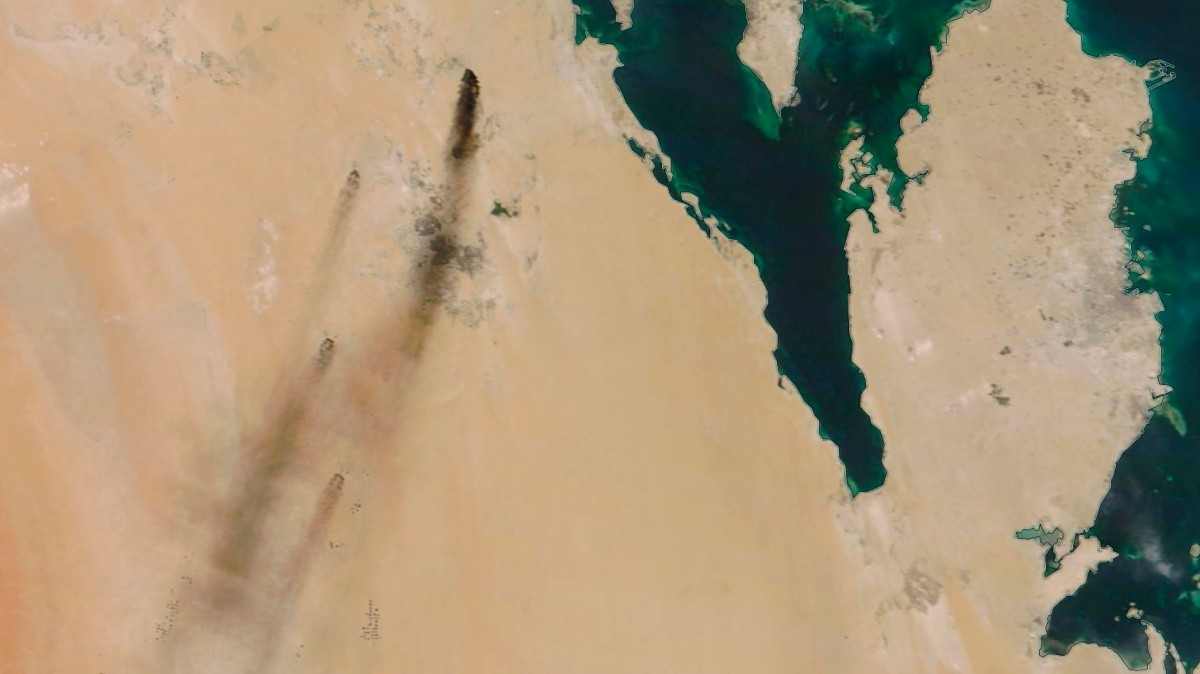 An attack by 10 drones caused fires at a major oil processing facility and a nearby oil field in Saudi Arabia. 6 Greenwashing Schemes That Show Corporations Will Never Lead on Climate

More and more companies are setting public goals for reducing their greenhouse gas emissions. History shows they can't be trusted.

Ceding American foreign policy to Israel is more likely than Saudi Arabia. The Saudi regime is a US vassal state and have no power to decide their own foreign policies w/o US permission. However in the case of Israel it is Natanyahu telling Trump to jump only to hear back how high.

We need a president who is interested in the problems here at home. It is long past time that Congress asserts its role as a check of presidential and judicial power and stops being a lap dog of the presidency. Amazingly this article did not mention the gruesome murder of Jamal Khashoggi with a trail of blood flowing from the hands of Mohammad bin Salman. There are many, many links with Saudi Arabia to the 911 attacks but americans are so manipulated and confused they refuse to demand of their own government any integrity. Of course, we all know that our government no longer really cares about the american people or what they think. We also know that we cannot believe anything from our president because he lies constantly. What a sad, sad nation.

It’s like being locked in a murderous, war-mongering loop! Did I miss where PEACE was ordered from the u.s. lexicon?!
Oh, I guess OIL comes before PEACE in the dictionary…

Trump is just the latest in a long line of presidents who were actually enemies of the american people.

I know Trump is loaded with something and it doesn’t smell good.

Consider the Saudi-Israeli relationship, then add trump to that equation of bosses and vassals when making the determination who/what drives US foreign policy in the time of trump - whether the saudis or isarelis trumps sycophant foreign policy allowing those entities to influence US foreign policy to any degree is treason!

Where is the intell? Where the evidence? where the US sovereignty?

.Both the saudis and israelis want Iran gone/destroyed. emasculated (both by the US) and trump serves both the zionist racist warmonger, war criminal and the saw murderer, warmonger war criminal apparently. Clearly trump has zero ability to parse truth from fiction, or what affects what is “good” for the us, vs what is “bad” and why - there is more going-on than meets the public eye.

Oh, I guess OIL comes before PEACE in the dictionary…

The word peace has been eliminated from the fascist, Amerikan, dictionary.

Nothing is as it seems. The price of oil has been increased $1 billion per day.

I was wondering how the recession would start.

Prices at the pump through the roof is a good example.

Trump is just the latest in a long line of presidents who were actually enemies of the american people.

Amerika has been, in my view, a military dictatorship, ever since Truman attacked North Korea and the presidents have ever since, have been the real enemies of the American people…DON’T BELIEVE IT? Ask yourself: How many American soldiers have died for the evil lies of all of the previous U.S. presidents?

update after this report was posted.
Americans have told saudi that cruise missles used in this attack were launched from Iran.
Please,
Make darn certain the american public and congress have absolute true evidence that this is true.
Otherwise,
We should refrain from air power retaliations, war.

Do not rely on some pentagon spokesperson assuring us that they have the skinny.

It is really sad that someone has to be a sociopath to rise to the top in our country. They lie, they steal, they kill. These are not good people and they have a different way of looking at life and humanity than most of the rest of us.

We can’t miss the fact that this right wing/inhumane president has an agenda
that runs parallel to both Saudi Arabia’s and Israel’s.

US/CIA has worked with Israel in many ways in training of military – and defending
it against United Nations resolutions while doing all it can to destroy the United Nations
and any reprimanding of the US or Israel as they continue to put Iran in line for nuclear
attack. We sell Israel weapons and supply the money they use to buy them with.

Saudi Arabia and 9/11 are an open question as to the involvement of the Bush family
and "W"s knowledge of what was going to happen; especially in putting Cheney in charge
of everything over those days, including allowing Cheney to erase NORAD from our skies.
Cheney moved part of NORAD to Alaska to watch the Russians –
and other sections to one of the Southern states – think it was North or South Carolina?
Bush family was very close with SA.

including the assassinations of RFK, MLK and JFK.