If members of the Democratic Party establishment weren’t already worried, after Tuesday night, they should be. In primaries across the country, at least eight candidates running on explicitly progressive platforms won out, including open socialists and political newcomers who took out longtime incumbents.

Far from being isolated events, these victories are emblematic of a vast left electoral insurgency that has been sweeping the country since the 2016 presidential election.

While these wins are encouraging he establishment sellout wing of the DP will not support any change…they will continue to “stay the course” of failure, complicity, corruption and servitude to big-money!

There is no honor or vision in the DINO party. Not in their “strategists” or those that control the party direction. They will continue the failed Clinton/Obama “centrist” (so-called) vision and loosing formula. They will continue to marginalize progressives and our issues (except in propaganda BS) The result of the establishment stupidity and arrogance from the likes of Uncle Tom Perez and other shills will be more betrayal of the American people, another 2 years of R’Con controlled Congress, and potentially another 4 years of nightmare for America and the world from the orange dicktator nutcase…years no one can afford, but the DP is in such a myopic and rigid mindset they will give up the chance to defeat the threat of the trump regime serving the 99% to serve their big-money donors and vulture capitalism…all the while peddling BS lies about DP “diversity” and representation (except for progressives and progressive issues!) , and begging for $ and support…support they will not get!

Don’t feel sorry for the Democratic establishment. They are actually doing okay. 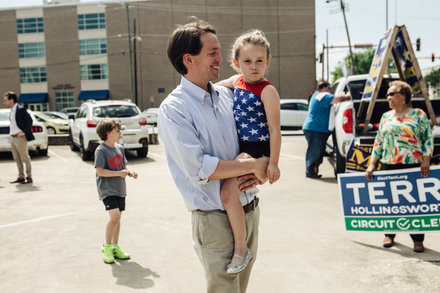 In right-leaning districts they hope to flip, national Democrats are backing moderates in primaries, a strategy that may yield a fractious House caucus if they win.

This one will be voting for progressives, liberals, Greens, anarchists, environmentalists and Left Libertarians exclusively; never for a conservative.

While this is, of course, wonderful news, it also makes more explicit the backwardness in which we reside. If you look at the programs these new candidates propose, they are all old news to the rest of the industrialized world.

What I want to know is whether the ones in PA will be willing to stand against the gas industry–drilling and fracking, pipelines, and the industrial complex of cracker plants and plastics plants.

the last thing the Democratic Party is, is democratic.

Yes. That’s why I prefer to call it the Democrat party—which, for the record, I was doing long before Fox News adopted it as a pejorative.

Mainstream media are trying their best to put the brakes on change. All across corporate media there are warnings, reports of dire consequences, and outright endorsements of don’t rock the boat leadership. The electoral victories in this article are merely the most public results of nationwide organizing and movement for change. Monday’s moral clarion call for justice across 30 state capitals will turn the dial way up on street heat! Electoral victories will follow. There are echoes of 68 and 38 - perhaps it’s time for another sit down strike in Flint and around the country.

The DNC actually profits from the present power structure. With R’s controlling the exec/legislative branches, they are free to vote the will of their plutocrat/militarist masters, yet can blame (erroneously) the R’s.

Meanwhile, the R’s reign of terror guarantees a certain amount of campaign contributions from pathetic & delusional liberals, as well as the usual truckloads of cash from war profiteers and crony capitalists.

I don’t even think the DNC wanted to win in 2016…nobody who cared about winning would have nominated Hillary, one of the most reviled politicians of our era. All they wanted was to act like they tried to stop Trump, so they can act all self-righteous now, while they profit from every one of his horrible actions.

It’s a perfect scam, and liberals fall for it every time.

I gotta believe. It’s about time and humankind is running outa space.

Don’t feel sorry for the Democratic establishment. They are actually doing okay.

Yes, they are doing OK maintaining the status quo and avoiding doing anything for the people they represent. After all, they only need be not as bad as Republicans to be successful. In this case, successful generally means staying on their contributors’ tits, blithely and blissfully sucking away.

If the Ds take back the House, it’ll be the same Blue Dog Caucus that brought us Romneycare controlling the agenda. And you’ll see a whole lot of them voting with their R-party counterparts on select legislation.

The D-Party runs from Bernie to Manchin. That’s incoherence.

With guys like that Dom Costa openly courting Repuglicans, why doesn’t he go ahead and switch? I mean, before he gets elected anywhere else as a DINO? Good riddance to bad rubbish. Sorry, to your flagship corporate ““Dem

”” (wink)
Seems to be where his loyalties lie first and foremost.

Godspeed in your efforts to continue to do this “well”!!

It confuses me, too, because they aren’t truly ‘democratic’.

The D-Party runs from Bernie to Manchin. That’s incoherence.

"As DSA’s National Electoral Committee co-chair Tascha Van Auken says of the election results: “A political revolution is coming, and establishment politicians can get on board or be swept away.”
If establishment politicians “get onboard” it will a cynical calculation to get votes not a genuine embrace of progressive policies. Don’t let them put lipstick on a pig. Corporate Democrats should be swept away. Let them use the revolving door they did so much to create and get jobs in the private sector where corporations can foot the bill for work done to increase corporate profits and power instead of taxpayers.

The most significant difference between the Social Democracies of Western Europe and the U.S. is not the degree of socialization but rather the people of these of these societies expect and demand that their economies be run for the benefit of the majority, not the 1% as is the case here.
This is the point that needs to be emphasized when comparing economic systems.

Yeah, it doesn’t look like there’ll be a wave of prosecutions, and it’s not like they had a lot of policy-related aspirations to be damaged by laying low for another six years.