'This Is How the Iran War Started': Grave Warnings as Trump Ditches Nuclear Deal

'This Is How the Iran War Started': Grave Warnings as Trump Ditches Nuclear Deal

Anti-war advocates and foreign policy experts implored Americans to remember the speech President Donald Trump delivered on Tuesday announcing U.S. withdrawal from the Iran nuclear deal, warning that it could mark the pivotal moment at which a historic diplomatic achievement was shredded in favor of a potentially catastrophic military confrontation. 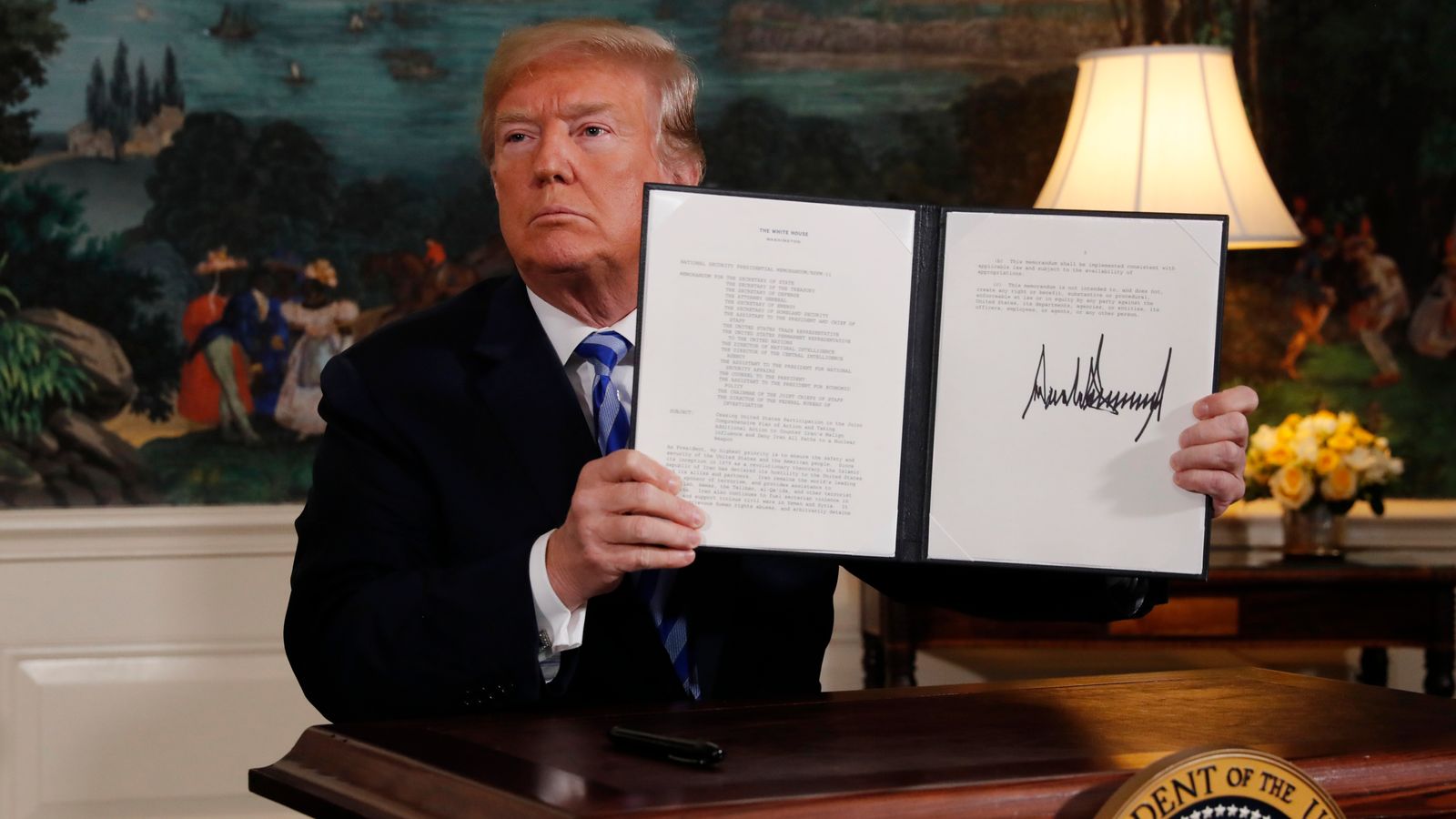 Live updates as President Trump declares the US is withdrawing from the landmark agreement, which he previously called "insane".

I thought Trump was an evil genius but now I know I was wrong. What kind of idiot, fool, imbecile dictator would gamble the destruction of all life on earth for superstition, greed, ignorance, racism and other conservative values?

Majority say US should not withdraw from Iran nuclear agreement

Almost two-thirds of Americans -- 63% -- believe that the US should not withdraw from the agreement made with Iran to prevent the country from developing nuclear weapons. Only 29% believe the US should withdraw, according to a new CNN poll conducted...

Open Letter to the People of Iran from the American People
Dear Friends,

We, the undersigned, apologize for Donald Trump’s reckless, baseless, and dangerous decision to pull out of the Iran nuclear agreement and we pledge to do everything we can to reverse that decision.

We are ashamed that our government has broken an agreement that was already signed not just by the United States and Iran, but also by France, Britain, Germany, Russia and China, and then approved by the entire UN Security Council in a unanimous vote. We are ashamed that our government has broken a deal that was working, a deal with which Iran was complying, a deal that was making our entire world safer and could have moved our nations closer towards the path of friendship.

We understand that our nation already has a dreadful history of meddling in the internal affairs of your country. The 1953 coup that overthrew your democratically elected government was unconscionable. So was US support for Iraq’s Saddam Hussein when he invaded Iran in 1980, including selling him material for making chemical weapons that were used against you. The 1988 shooting down of an Iranian civilian airliner, killing all 290 passengers and crew, was unconscionable. So, too, are the decades of covert actions to overthrow your government and the decades of sanctions that have brought such needless suffering to ordinary Iranians.

We understand that the US government has no business interfering in your internal affairs or in the Middle East in general. We should not be selling weapons to nations guilty of gross human rights violations or sending our military to fight in faraway lands. With all the flaws in our own society–from massive inequality and racism to a political system corrupted by monetary influences–we should clean up our own house instead of telling others how to govern themselves.

We will do everything in our power to stop Donald Trump from strangling your economy and taking us to war with you. We will ask the UN to sanction the United States for violating the nuclear agreement. We will urge the Europeans, Russians, and Chinese to keep the deal alive and increase their trade relations. And we will work to rid ourselves of this unscrupulous president and replace him with someone who is trustworthy, moral, and committed to diplomacy.

Please accept our hand in friendship. May the peacemakers prevail over those who sow hatred and discord.

See you out in the streets!

Iran will pay the price for not understanding that the oil under its soil belongs to the United States.

The UK, France, Germany, Russia, China and the European Union stand strongly behind the deal, and against the US’s rejection of the deal

Now those other nations must decide to challenge the US dicktator and his regime of, by and for Israeli interests! They must stand-up for themselves, world peace, and sanity in the face of the disrespect for their opinion and policy from trump. He has told the EU and the other signatories their views and fears and well-being are not important. Now they must respond in the strongest ways to counter trumps pull-out…if only his father…well, never mind.

I believe trumps ill-conceived idiot decision is a treasonous act - there was NO sane or wise rationale for “pulling-out” of the deal, only danger and the malignant wishes of Israeli extremism and their chief nutter netanyahu. Many facts and opinions outside the trump regime and Israel (and the Saudis) point to this being a very bad decision for numerous reasons, but as usual, we have seen little other than bad decisions and policy from trump. now a confirmed Israeli lap-dog boot licker!

Iranian President Hassan Rouhani said following the U.S. president’s remarks that he has “directed his diplomats to negotiate with European countries, Russia, and China about remaining in the nuclear deal,”

This supports what you wrote. The only nation in history that actually dropped two atomic bombs over densely populated cities threatens a non nuclear weapons nation…

I think the reasons you gave for Trump’s decision are really the reasons behind Bolton and Pompeo’s opinions on the subject. I think Trump’s main reason for doing it is that it undoes Obama’s signature achievement… and we all know how Trump hates (and probably envies) Obama.

this lunatic was warmongering in his election speeches—we shouldn’t be surprised at what he’s doing now…the don must keep the makers of wartoys in business, and his own delusions of grandeur intact

if the Iran threat dissipated, the need for increased armaments would diminish—this is why he will go to Korea, and walk out on that deal too.
Defence spending is all—hence the reactivation of the 2nd fleet—yet another manifestation of his delusions of military grandeur

he will also walk away from the N Korea deal after much posturing and rhetoric.

add the pieces together and the trumpian jigsaw makes sense—at least to him.

but of course his delusions are based on an infinity of resources, namely oil.

but oil isnt infinite, the oilparty is effectively over–the shales can only last a few more years—already the usa is oil-bankrupt:
https://extranewsfeed.com/from-oilslick-to-tyranny…

a condition few can grasp

and as that bankruptcy begins to bite, the current insanity of political body will turn on its own people, blaming them for inept governance

The End of More (Pagett Amazon) explains why

Capitalism has always been a hungry predator of Earth and humanity. It stokes war to terrorize friendly families and break them to the yoke of blind obedience to centralized government democracy builders rather than neighbors, friends and the family. Capitalism does all this with soothing propaganda assurances of family values.

Pop the balloon to see the line-up of insane perverts ordering loving families to attack other loving families. Torturers and murderers hock their wars as protection of decent Americans. Ask yourself why and you will see that capitalism does not actually make profits without the help of government structures that do things like grant monopolies to grain exporters using shipping paid for and maintained by ordinary family people who pay taxes.

Capitalism is withering under the environmental collapse of its own destruction of nature converted to paper money.

Iran has a thousand years of relations among surrounding countries, with great friend chess players; China, Russia, Turkey, Korea, the Philippines, Hawaii and the Pacific Coast of North America will do nothing except arrange defenses for the US attack. Capitalism is collapsing under the friction of environmental collapse. The US will attack the world as it falls and everybody knows. Everybody also knows they are all down wind of each other. Surviving the insane death throws of the United States will be tricky even for chess masters.

Most U.S. media outlets do not find this information noteworthy and have no interest in conveying fundamental facts about what’s going on in Iran.

Trump floated the idea that John Kerry could face criminal charges for lobbying to salvage the Iranian Nuclear Deal.

Iran will pay the price for not understanding that the oil under its soil belongs to the United States.

And thus the circle goes 'round once again.

Iran did not understand this in 1953, when Mossadegh wanted to nationalize the oil industry. He was overthrown in a US-British coup and Reza Pahlavi was returned as the Shah, much more amenable to Western business interests even if he ran, along with his secret police SAVAK, a brutal torture state.

Enter Ayatollah Khomeini and the overthrow of the Shah in 1979, with the US becoming the Great Satan, ushering in the hostilities between the US and Iran that could now turn into a hot war . . .

Have to be really sneaky on keeping those huge link photo headers small, Giovanna. clicking on “hide preview” in comment box will keep them small at first, but any edit will turn them from small to huge and keep them huge. If one must alter a comment I found I must edit by eliminating the original. eliminate the original in an 'edit" with a short “edit comment” (or something) note and delete the original after copying it. Then you can post a new comment/reply edited as you wish before posting and get back to small images… hope that’s clear…keep the faith. Peace…now more than ever.

It’s now time for US military members to step down. Refuse to fight a totality preventable war.

I think the fancy term is “military Keynesianism.” Permanent wartime economy since the end of World War Two.

Uh… 'the hell are you talking about?..I guess I forgot, the US owns the world…