Seems as though our Biodiversity is rapidly becoming a Biohazard.

The Great Unraveling is underway and will only accelerate now, sadly.

the planet will continue careening toward a point of no return

True that! (I just trimmed off the superfluous “unless” part.)

Marjorie Cohn makes the interesting point that, while $20 million has been bandied about as a possible fund to battle 75,000 blazes today in Amazonia, California’s Tubbs fire (just one fire, mind you) cost $100 million to fight in 2017. How many clues do we need that those in charge couldn’t care less?

Amazon Fires Will Have Global Consequences. The UN Must Act. 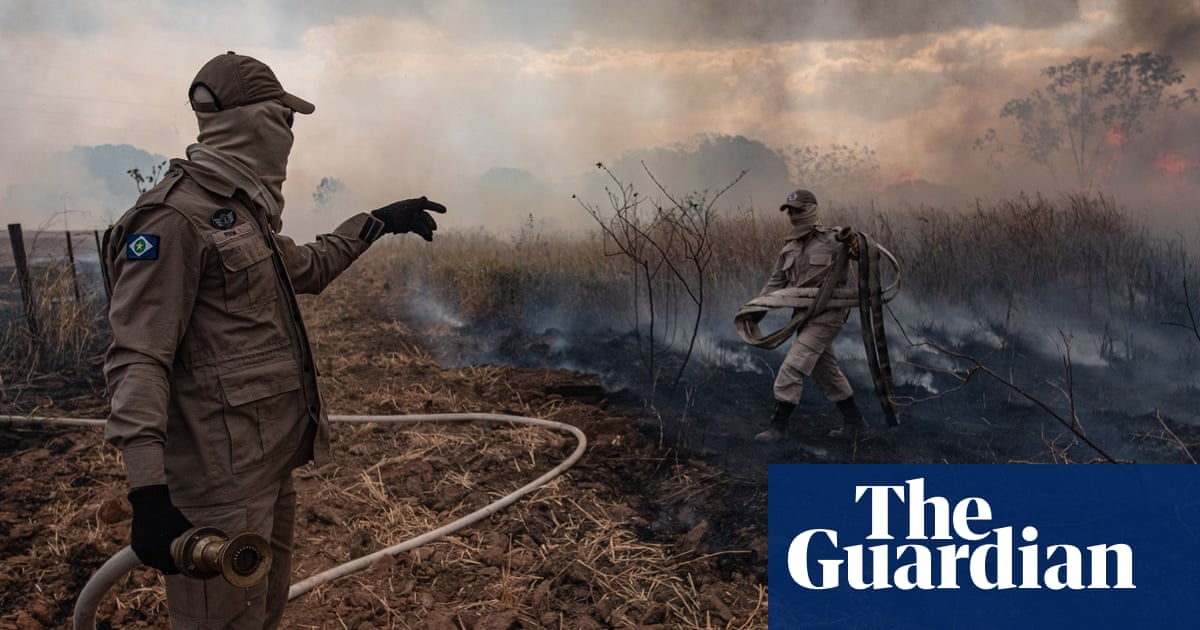 The Sahara Desert was grassland under the same post-ice age conditions as today. Homo Sapiens found ways of turning grasses to cattle/game to meat, and then the grass became sand dunes.

Carthage/Tunisia was still Rome’s great granary 2000 years ago. The story about plowing salt into the ruins of Carthage, the city, didn’t affect most of Tunisia.

Alaska is changed. So is the Arctic Ocean’s ice pack.

Brazil is expected to become savannah, grassland with dry seasons.

I recommend that we at least try to restore these places. On land, good thick carbon-rich soil is an important part of the restoration process.

The transition away from our current fossil fuel-intensive lifestyles will come about as you’d expect:

Rammed down our throats by the mother of all crises. Here she comes, folks.

And with atrocities such as this we deserve all we get: 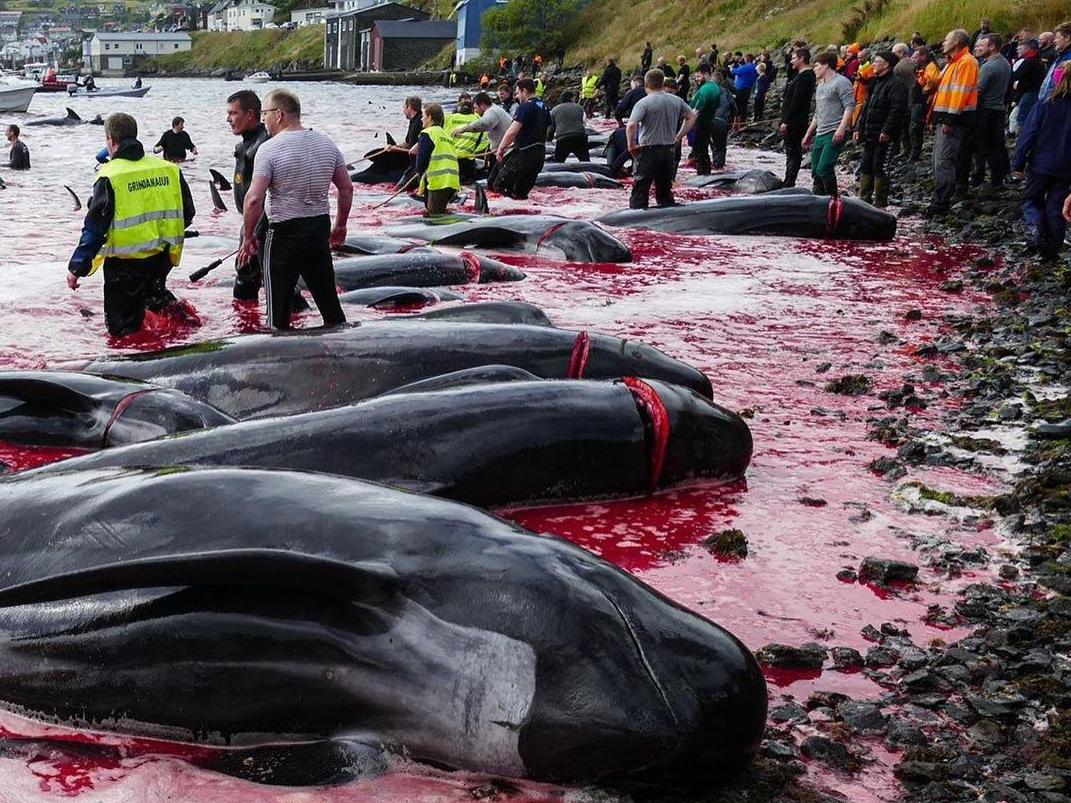 Almost 100 whales driven into shallow bay before being dragged onshore and...

It’s a half a world away, but here’s an idea to consider for Australia and the Great Coral Reef: Reefs are usually shallow, 20’-40’, shallow enough to erect chain-link fence steel poles that rise above the surface 10’-20’. Anchor them in concrete footing deep enough to withstand winds and waves. Between these poles string cable. Awning strips of canvas or some durable material is strung securely between the cables and the shade reduce water temperature. A series of such structures could possibly leave enough healthy coral in place to rebuild surrounding coral that doesn’t survive. There I go again, trying to find solutions inside my head.

The U.N. Chief is understating our condition(s). Please go here, I have the map set for sulfur dioxide surface mass. Grab the map and tour the globe. Click where it says Earth and change settings as you wish.

earth :: a global map of wind, weather, and ocean conditions

We’re killing ourselves. Is it so necessary that we must take down all other beautiful creatues with us?! A very disturbing article. Thank you for sharing. So true, we get what we deserve!

Deep enough to withstand wind and waves huh? You have got to be kidding! And you want to shade the water? Meaning thereby hoisting a gigantic sail miles long basically 10 to 20 feet above the water? Even normal seas and wind would leave it in shreds soon enough but heavy seas would… sixty foot waves occur in heavy seas. Australia suffered a 300+ kph typhoon a few years ago. Doing a little research beforehand might have helped. Sorry.

The Green Sahara existed in prehistoric times but not in the same climatic conditions as today. The African Humid Period was caused by the recurring wobble in the Earth’s orbit around the sun. It caused more monsoon moisture to ‘flow’ northwards. This happens every 20,000 years or so. Moreover as the Ice Age retreated residual moisture conditions prevailed for several thousand years as the ice moved north. Huge lakes which once existed helped prolong Green Sahara conditions locally until the current aridity returned. However Some areas were still green enough for Roman caravans to cross the Sahara and graze their animals along the way. It would require far greater skill for later post Roman caravans to cross the eventually denuded sand and rock.

I’m interested in choosing between what’s terrible, what’s not terrible but still has pretty bad side effects and what’s optimal.

The dependable standby humidification device is more trees, and fewer goats to eat the trees until they are dead. People build piles of rocks in order to collect dew every night, which waters a small tree until it sinks roots deep enough to survive. People build surface water catchbasins around tree trunks to more effectively water trees with rare rainwater. I’ve seen a suggestion for clear plastic around at tree’s leaves to minimize evaporation until the tree gets deep roots and can survive.

People in this field love carbon-rich soil because it retains rainwater. Part of the tree’s job is to re-carbonize the soil so that wheat can grow.

I have two area humidification devices. My fog pond is a heat-storing solar pond with a certain layer of oil on top. No, I didn’t invent the solar pond. My fog pond has a swimming pool lip, and late at night a pump removes the oil from the hot water. Billows of fog roll to the shore and beyond. If we’re putting salt water into the fog pond, we need an excellent pond bottom so that no salt water ever gets into the ground water.

The other device needs a tall mountain. It’s a chimney running diagonally up the side of the mountain. The chimney is filled with super-moist hot water vapor, the waste steam of some other industry or from a geothermal or solar source. Most of the water vapor condenses on the way up. The rest of the cooling air column spouts far above the top of the mountain, often late at night to maximize precipitation and dew. A seasonal snow cap on the mountain would be good for the region. I should mention that a wind turbine inside the chimney generates an enormous amount of electricity on demand.

"I hope this will have a snowball effect," said Paşca Palmer. "It’s a growing movement. I feel that now the heads of state are embracing this, we have a good signal."

I am having trouble with the outright pessimism displayed so often here. There is a considerable difference between acknowledging an existential threat and giving up ‘before the fat lady sings’.

I saw a documentary on this practice many years ago. What is not mentioned in the article is the fact these killers arrive on the beach in their four-wheel drive vehicles to slaughter these innocent creatures. It’s not as though they are poor and have no alternative source of food.

You got a better idea? I was figuring small strips on small structures meant to blow in the wind and survive heavy seas, but still provide shade. Plus maintenance and replacement. Maybe you should do a little research before assuming an idea won’t work. Or maybe come up with a better idea. I won’t hold my breathe waiting for that to happen.

I don’t think it’s a case of “giving up”. More of a collective commiseration in the face of such adversity which is annihilating our planet.

I was hoping you would reply wings !

In the mountains, this type of pessimism is lethal - no one with that attitude would ever be allowed on a trip with me. In the military, any one on the front lines would I imagine, be sent behind a desk or worse.

This new IPBES - I think highly of it - much better than our (and my) earlier focus on climate alone.

Not included in this CD writeup, but present in the Guardian article, are the words of the executive Secretary of the IPBES, Cristiana Paşca Palmer, and this paragraph for me points the way forward:

“This is not just about biodiversity conservation, it’s about finance and trade and changing the model of development. We need to put biodiversity and natural capital at the centre of the economic paradigm.”

From this CD writeup - this is key:

"I hope this will have a snowball effect," said Paşca Palmer. "It’s a growing movement. I feel that now the heads of state are embracing this, we have a good signal."

Consider, if you will. the following ~

Since JFK, we have been poorly led - to put it mildly, and things are now critical politically, with no checks and balances operational.

A US electorate, those who bother to vote that is, conditioned to being conditioned, to instant gratification, are apparently incapable of a prolonged and dirty fight to the finish, which is where we are. Pacifism may be admirable to some - not to me.

We win or die.

Yes, this surely has a higher-than-usual chance of bringing a great and sudden change for the worse. But we are not likely to know which were the particularly important events or dates even afterwards, are we?

I do not mean to disparage the utility of articles like this, which are necessary to help people recognize that a problem exists. But we have to go past this pretty quickly, and start writing about and implementing solutions.

One of the reasons that so many of us have been so slow to do this is that we assume for one reason or another that this is a job for government or for the rich and powerful.

Indeed, it would be nice if these entities would pitch in. But they will not, or they will only do so after the problem has become very, very advanced. Their modus operandi is as it has been for other matters. They assume that the way that they will solve problems for themselves is to maintain and increase control over populations and resources, and coerce and extract their remedies from these.

This is not only a moral failing. Having long used connections and networks keyed to abuse of coercive power, they are little adapted to the cooperative sorts of organization that could create positive change.

Most changes in the ways people live come from changes in day-to-day actions undertaken to resolve problems of individuals, families, and small groups. The larger forms of society largely get cast around the immediate and practical necessities of these as macroparasitic upper classes go about organizing to exploit these, as resistance develops, and as reaction counters resistance.

Individuals cannot readily do what we might because we have to support ourselves, and because mostly we engage the existing extractive, artificial, and abusive economy to do this. Indeed, as things stand, it is mostly impossible to avoid this in any immediate and effective way.

The alternative, then, is to create a regenerative economy that can support us well enough that we can and actually will leave the existing economy of abuse behind–with lots of political turmoil, I expect, but more critically, starting immediately. Since this is not what the wealthy do, the rest of us must do it piecemeal, moving towards it as we can.