Rapid and purposeful social evolution will surely be better than old-fashioned revolution for replacing tyranny.

Yes - agreed, hence I am set to read Steven Pinker’s new book “Enlightenment Now”. I need some good news, which this book documents apparently, but I am skeptical, of course.

The Environmental Protection Agency - bit of a joke just now, but I’m not laughing.

This just in on The Guardian:

Record warmth in the Arctic this month could yet prove to be a freak occurrence, but experts warn the warming event is unprecedented

I’ve been watching the jet stream for twenty plus years, using it to aid in climbing. The last five years or so it has been getting crazier and crazier - and now this (link above).

The last of the thick multi-year ice is now under attack in the Arctic Ocean - I think we are probably near some type of ‘abrupt climate change’.

The real problem as I see it is an abused, morally injured electorate, who are also scientifically illiterate, ensconced in a country which is still an expansionist empire, embedded in a world of rising ‘other’ superpowers, which fought a revolutionary war to free itself from another empire, the British, yet still uses the antiquated and medieval system of measurements of that very same Britain - neither of which has had the sense to ditch this system in favor of metric, and one of which still clings like a child to monarchy.

Capitalism long ago entered into a stage where private interests profit off of public poverty. They create costs, and their businesses benefit from being able to push their costs off onto society at large, the environment, and people not able to defend themselves. In the instances you can show that capitalism benefits humanity, often the case that when you take into account these things, these social and environmental costs, they far outweigh the benefits. The problem is, of course, that many of these impacts lack market values and are hard to trace back to their source. Pruitt is a monster, but if he weren’t doing this, some other right wing sociopath would be. The system requires it.

John Bellamy Foster has written a lot about “Lauderdale’s Paradox”. Check it out.

The Paradox of Wealth: Capitalism and Ecological Destruction | John Bellamy...

Today orthodox economics is reputedly being harnessed to an entirely new end: saving the planet from the ecological destruction wrought by capitalist expansion. It promises to accomplish this through the further expansion of capitalism itself,...

The ecological contradictions of the prevailing economic ideology are best explained in terms of what is known in the history of economics as the “Lauderdale Paradox.” James Maitland, the eighth Earl of Lauderdale (1759-1839), was the author of An Inquiry into the Nature and Origin of Public Wealth and into the Means and Causes of its Increase (1804). In the paradox with which his name came to be associated, Lauderdale argued that there was an inverse correlation between public wealth and private riches such that an increase in the latter often served to diminish the former. “Public wealth,” he wrote, “may be accurately defined, — to consist of all that man desires, as useful or delightful to him.” Such goods have use value and thus constitute wealth. But private riches, as opposed to wealth, required something additional (i.e., had an added limitation), consisting “of all that man desires as useful or delightful to him; which exists in a degree of scarcity.”

Scarcity, in other words, is a necessary requirement for something to have value in exchange, and to augment private riches. But this is not the case for public wealth, which encompasses all value in use, and thus includes not only what is scarce but also what is abundant. This paradox led Lauderdale to argue that increases in scarcity in such formerly abundant but necessary elements of life as air, water, and food would, if exchange values were then attached to them, enhance individual private riches, and indeed the riches of the country — conceived of as “the sum-totalof individual riches” — but only at the expense of the common wealth. For example, if one could monopolize water that had previously been freely available by placing a fee on wells, the measured riches of the nation would be increased at the expense of the growing thirst of the population.

By the way, the EPA has long suffered from some pretty bad corruption. During the Bush years, there were studies done on things like Atrazine, and the data the EPA used was provided by the companies that made chemicals like Atrazine. When panels were formed, many people on the panels were essentially lobbyists for those chemical producers. Our environmental protection isn’t like the EU’s. We allow more pollutants and we don’t use the precautionary principle, which was written into the founding documents of the EU. We allow companies to throw massive amounts of pollutants into the environment and it is up to use to prove that they harm public health. Countries that use the precautionary principle assume that a chemical will harm the public and it is up to the producer to prove otherwise. I realize that this isn’t always the case in practice, but it none the less would be a radical change from the status quo in this country.

Just another radical change we have to fight for, and one neither of the parties will willingly go along with.

I agree we have to do that. What I don’t see is evidence that the Democrats are the party to do that. In fact, the way the DCCC and the DNC are doing things, they are fully captured by corporate interests. Just a few weeks ago the DCCC had a big, fun party with a huge number of lobbyists. Pointing out how bad the Republicans are in this regard doesn’t make the Democrats something they aren’t, and that should have been one of the biggest lessons from the 2016 election.

If the Democrats don’t present an actual coherent alternative, and they have no interest nationally in doing so, what do you think they will do with their power? What will they do policy wise? If it isn’t up to the task of solving our biggest issues, in large part because we need to do things that will anger most of their donors, we’ll be right back at square one in an election or two.

Whether it’s this example, or the willingness to deprive tens of millions of their health insurance…the operative description is: Sadism.

Thanks fern. I firmly believe we must be the voice of the helpless and voiceless, especially for threatened innocent wild animals.

I have been an advocate for wild horses (and burros) in the American west for decades. Wild animals that are increasingly being removed from their native range or killed to serve “welfare ranchers” who lease public lands (habitat) from the BLM via sweetheart deals for pennies on the dollar. They want every wild horse, wolf, bear, big cat and other animals that threaten their strangle-hold on public lands!

The trump regime is in the pocket of every big-money and power interest including welfare ranchers! The selling of every natural or wild place and thing is on their list for destruction and/or death and pollution!

If not us who? If not now, when? All of good conscience and moral compass must do their part.

About 25,000 wild horses are left in small enclaves while over 5 million domestic livestock cattle and sheep, are run/grazed on public lands! 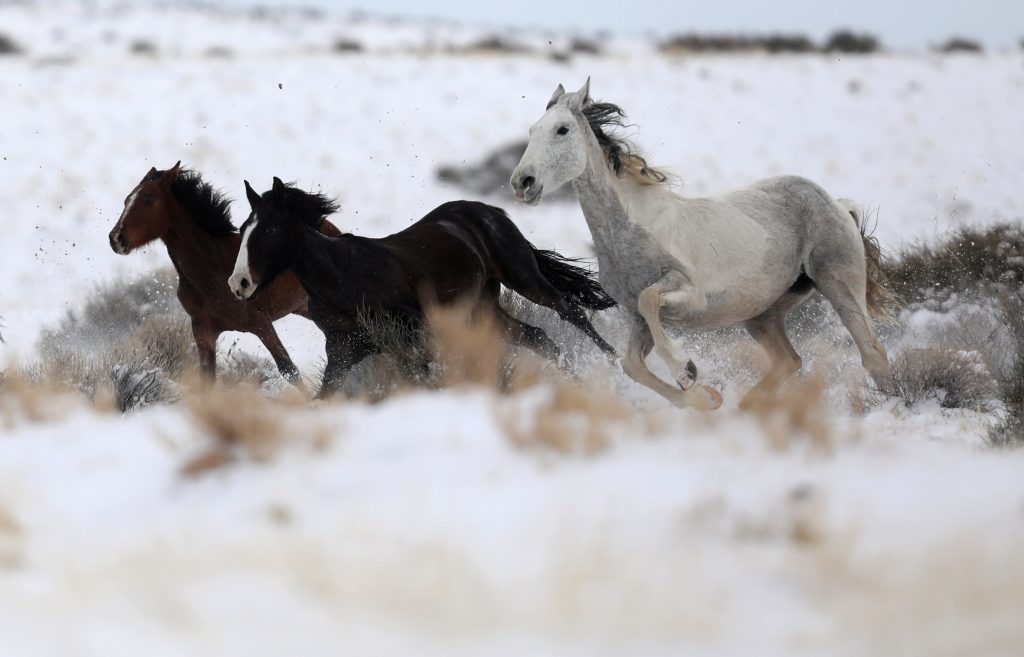 Wild horses could be sold for slaughter in Trump budget plan

President Donald Trump's budget proposal calls for saving $10 million next year by selling wild horses captured throughout the U.S. West without the requirement that buyers guarantee the animals won't be resold for slaughter.

http://www.ispmb.org GET INVOLVED! Protect The Wild!

Repeal and replace these A-hole Republicans!!

JR - that was great. Thanks for that!

Yes, it’s an extension of the libertarian tripe “self reliance” argument.

Until of course some chemical company clucks up their drinking water. Nah, on second thought, they will be corn-sistent and corn-gratulate the company on just pursuing freedom through the marketplace.

“No problem dear polluting company that just poisoned me and my family. My bad. Fight on keeping your freedom of the marketplace in tact, I’ll just move. It’s the least I can do for your cause. Thank you.”

Ayn Rand if your are listening, go cluck yourself already.

While acknowledging that this is far from pragmatic or reasonable, nonetheless, in my view, we will continue to be slowly dragged beneath the $wamp (to our collective fate) by the ongoing existence of the corporation per se.

Just as likely: Our “leaders” are allowing us to drive ourselves to suicide.

What kind of nation are we becoming that we prioritize military spending and corporate profits over the health of our citizenry, especially our children … http://www.truth-out.org/news/item/43679-truly-wicked-trump-epa-dissolves-program-that-studies-effects-of-chemical-exposure-on-children

Yep. That does seem likely. You might be uncomfortably accurate.

On the positive side; Cosmos is expanding at an increasing rate and so is evolution, an integral part of the expanding whole.

I don’t hold any supernatural explanations. Life and suns began evolving when the first quarks glommed onto each other in a mating frenzy that is still going on. Human life is mighty fancy cosmic powered biology. Let’s hope people wake up in time.

If this crew led by Trump doesn’t make Bill Clinton and Barack Obama look good to people who care about the air they breathe and water they drink I don’t know what it will take.

What’s funny is in my experience, the libertarian types I know are the biggest whiners ever. They are always bitching about something, something is always being done wrong to them. And, I know a lot of libertarian-conservatives types.

As a country we are at a political impasse. Democrats had a great candidate to run for office and win twice, Barrack Obama. A clear choice to support diversity. Then the 2016 election happened. Hillary Clinton, a consummate party insider ran for president. She got over 2 million more votes than Trump, but that was not enough to avoid the corrupt Electoral College System, where Electors were supposed to vote for the same candidates as the people in their district. . I wanted Bernie Sanders had bee then Democratic candidate or Elizabeth Warren. Hillary was too much of a veteran insider for my interest, even though I wanted the first female president in our history.

Where do we go from here? Democrats need to become more PROGRESSIVE instead of trying to impersonate the Republicans. The 2016 election had the lowest voter turn out in 70 years. They are going to have to offer more than being the Republican Lite Party.

The unborn, fertilized eggs, and developing fetuses are the most vulnerable to toxic pollution, as are our children. Isn’t this just a fine example of just how really pro life these Republican really are?! It ought to make everyone in America hopping mad and fit to be tied! Pruitt is a very evil man! No wonder that he feels that he needs four bodyguards around the clock!

TomJohnson1: We will primary the corporate shill democrats out of the Democratic Party and then tar and feather them!

chapdrum: Sadism and cruelty are the cardinal signs of the Nazi and perverted dictator types like Putin and Dutarte, and probably the entire Republican Party. We must stop these evil thugs any way we can! Our democracy and all of our very lives are at stake!