US 'Lies' Slammed After Pompeo, Without Proof, Blames Iran Tehran says US bases and aircraft carriers stationed up to 1,200 miles around Iran are within range of its missiles.

Ms Lindsey still wants to attack Iran . Only if he rides the first bomb.

More excuses to destabilize the Mid East. When I see something like this “attack” my first thought is: where was Erik Prince and his boys at the time?

“There is no evidence the attacks came from Yemen”

This is a tacit admission by Pompeo that the US does not have direct evidence as to where the attack came from.

The reality is the trump regime is all-in on Israeli racism, ethnic cleansing, and especially carrying water for Israeli warmongering against Iran. This baseless charge is part of that pattern of Israeli bootlicking from the trump regime and pompeo!

The consequences of trump/pompeo’s serving the interests and pathology of a foreign power rather than rational US interests are very serious and treasonous!

Pompeo has said he believes “god sent trump to protect (and defend) Israel” - as treasonous a statement defending America serving a foreign power as has ever has been said!

With a religion-first mindset as flabergasting, actually criminal, and moronic as pompeo’s words, he is clearly unfit to serve -unfit to represent a mulit-cultural nation, not to mention the ostensible separation between church/religion and state as a bedrock (now crumbling) of the US Constitution !

“Secretary of State Mike Pompeo suggested in a televised interview Thursday that God may have sent President Donald Trump to Earth to protect Israel.”

“Pompeo made the remarks in an [interview with Christian Broadcasting Network, or CBN, in Jerusalem, where he visited the Western Wall with Israeli Prime Minister Benjamin Netanyahu” 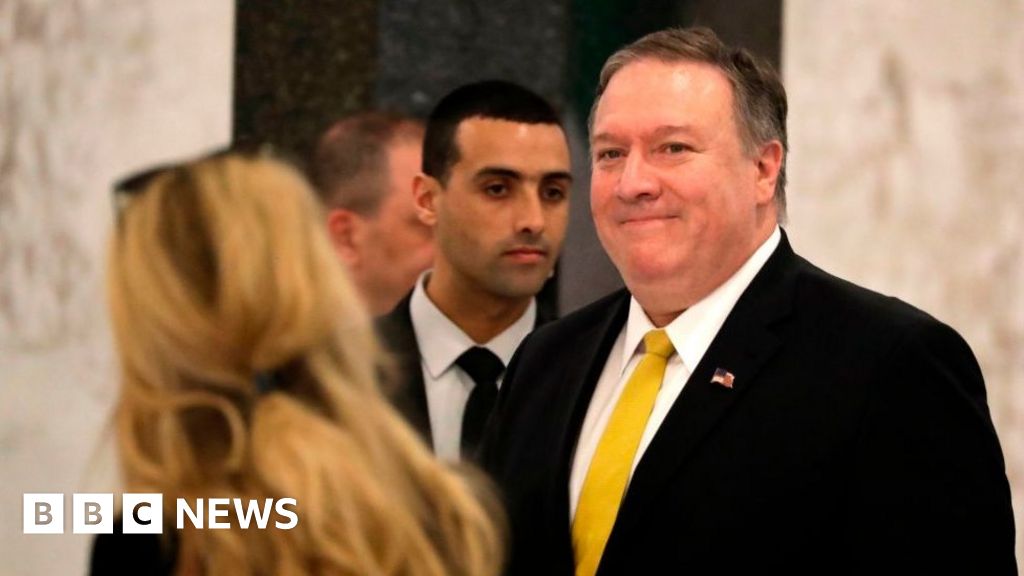 Pompeo: Trump sent by God to save Israel

The US secretary of state suggested divine intervention delivered Trump for the salvation of Israel.

Poor little Pompy. I can see him stamping his feet and flinging his arms around and red-faced shouting “Iran did it mommy! Iran! I…rannnnnn!!!” I blame you and the rest of the Bush administration for war crimes. But half of you are back at the White House. Condelezza Rice is on a tv book tour. And GW is being a coy and impish amateur painter in his guilded retirement. They should all be in prison. But we don’t always get what we want, do we, little Pompy-boy. You piece of human garbage.

Absolutely frightening that such outrageous religious claims are normalized in America as legitimate public religious and political discourse.

Trump and his Owners see the economy slowing. They have decided a war is needed.
War made easy:

Pompeous twit sez:
“There is no evidence the attacks came from Yemen.”

“… meanwhile, this steaming pile I just dropped from my haunches is chock-full of evidence that Iran did it.”

I thought the “Swamp” creatures were going to be cleared out. Pompousass must be the chief scum-sucker of the swamp.

First off: Iran foreign sec’y Javad Zarif is MORE American than I am.
Second: Is Lindsey Graham taking orders from John Bolton and gen’l Keane (Small g)
Third: Our sanctions are stupid, counter productive and the Persian peoples are suffering inflation, hunger and lack of medicines. Total killed there since 1980 is two million !!

The US fascists are getting ready to do what they do best: Lie, destabilize a sovereign nation, install a government to their liking, and bring democracy and freedom to the people, ad nauseam.
Venezuela is next…

Every time we break some regime’s back, our security is worse, our treasury is looted by the MIC, and the body count is tragic.

Meanwhile, with our backing and hundreds of billions worth of US-made weapons, a ragtag crew of Houthis is kicking Saudi ass. If Iran aims its missiles at Saudi refineries, Ms Lindsey and Pimpeo will have some splainin to do about gas prices at $4/gallon.

Even the Saudi’s have declined to blame anyone for the “attack”. Pompeo, as usual, is taking his marching orders from Netanyahu while the Saudi’s are taking a little breather. The question remains: Who benefits from the Saudi’s losing half of their oil production? The Saudi’s have more enemies other than Yemen, including Syria and Iraq, who are quite capable of inflicting damage on the Royalty.

Interestingly, Iran has signed a $440 million contract with a local company to develop the Belal gas field Iran shares with Qatar.

Great points, Emphyrio. Though, I doubt Pompeo believes a word of the Evangelical nonsense he’s spewing. Regardless, it’s still treasonous, and it’s still frightening that a large block of American voters buy into this Israel Chosen-People/End-Times Apocalypticism mythology.

While I cheered Bolton getting the heave ho from Donito Assolini. Pompeo Maximus. Is even more scary. His is a blend of evangelical bullshit and end times dogma mixed with neocon crazy. Pompeo is a small minded country bumpkin who has hit the big time. No one would have picked this worthless moron except Trump.

Iran has now launched an unprecedented attack on the world’s energy supply.

No, jsut some of the world’s oil supply. That sounds like a good thing to me.

Netanyahu must be getting impatient; the evil crook wants his war and he wants it now. Jared must be working over time.