Refusing to let a chance to achieve lasting peace on the Korean Peninsula slip away and warning against a return to "rhetoric of nuclear annihilation," a group of peace activists, foreign policy experts, and ordinary Koreans gathered outside the U.S. Embassy in Seoul on Friday to call on President Donald Trump to reverse his cancellation of the June summit with North Korean leader Kim Jong-un and immediately return to the negotiating table.

One way or another, the MIC intends to renew the NUCLEAR FEARS
that worked so well during the Cold War for them.

It’s taken them 18 years – and a lot of false attempts at trying to make “terrorism”
an issue – but my bet is still on Global Warming being the biggest threat.

In fact, in 2004, the Pentagon told “W” Bush just that, saying that Global Warming
is more serious than “terrorism” as a threat to the security of the US.

Now the Pentagon tells Bush: climate change will destroy us

· Secret report warns of rioting and nuclear war· Britain will be 'Siberian' in less than 20 years · Threat to the world is greater than terrorism.

Haven’t read the Guardian’s report on the warning, but the original report included the
fact that Global Warming will increase the frequency and severity of EARTHQUAKES.
That information was scrubbed from the internet reports some time later.

The report is really worth a quick scan – and keep in mind this was 16 years ago when
the Supreme Court and GOP gifted us with “W” after a very embarrassing election –
but they managed to hold onto government and continue now to deny Global Warming.

It’s taken them 18 years – and a lot of false attempts at trying to make “terrorism”
an issue – but my bet is still on Global Warming being the biggest threat.

Global warming (my preferred term is anthropogenic climate disruption, or ACD) is certainly the biggest threat to life on Earth, but because of the ungodly amount of profits to be got from activities which guarantee its continuation, a host of other candidates has been put forth to distract and confuse us.

“Terrorism,” North Korea and Iran are currently at the top of the manufactured threat list—and, counterintuitively, it seems that everything that CAN be done to provoke them IS being done. As usual, domestic political considerations are driving foreign policy, without regard for any consequences intended or otherwise.

“The fate of all mankind, I fear
Is in the hands of fools.”
–King Crimson

’This administration is ignoring the evidence in order to placate a handful of large energy and oil companies,’ he added.

It’s always been the oil industry, of course –
but any of the Private interests who were given control over our natural resources,
are responsible, as well.

And finally the great allure of money: an artificial instrument which converts to power and
which we should have un-invented long ago.
That put the common sense, consciences and souls of our officials up for sale.

Neither the trump regime & its agents, or the for-profit MICC war-machine want peace - bad for business!

The warmongers likely pointed-out to the supreme leader (trump) that if peace breaks out beginning in the Korean peninsula US troops will be leaving and that was not a good thing.

The orange idiot dicktator also apparently did not consult with South Korea’s President Moon on his lame claim excuse citing NK’s “tremendous anger and open hostility” - after the psycho bolton reared his ugly head, who could blame a negative response from NK? I hope the South’s Moon doesn’t play the lap-dog sycophant…Note to SK, trump doesn’t give a shite about you, your people, or war - even nuclear - on your doorstep, or peace, or anything else except power and profits for the war-machine! Easy for a POS to threaten nuclear (or any war) in someone else’s back yard! MoFo!

"Hong Min, director of the North Korean studies division at the Korean Institute for National Unification, said it did not look like the US consulted South Korea over the cancellation.

“It is a diplomatic disrespect to President Moon, who has been coordinating between the North and the US as a mediator,” 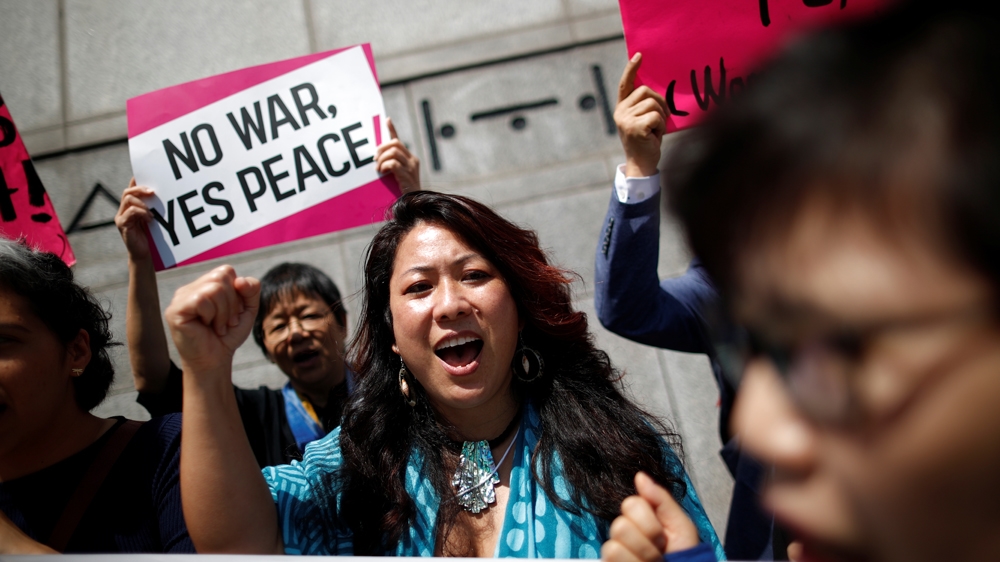 Disappointment in South Korea as Trump nixes summit with Kim

Just more corroboration of what I have posted before that the last thing the war profiteers want is world peace.

True. I think the only thing that will stop the madness is a worldwide economic crash. Money is ruling this world in the most evil of ways.

True. Too bad there is not some way to make peace profitable!

While Donald Trump is gunning for war with North Korea, we, the people of the United States, declare peace. Sign the People’s Peace Treaty and then get your friends and family to sign as well.

Nothing shuts a warmonger up faster than a bullet… there should be an open season on the government warmongers… let them run and hide.