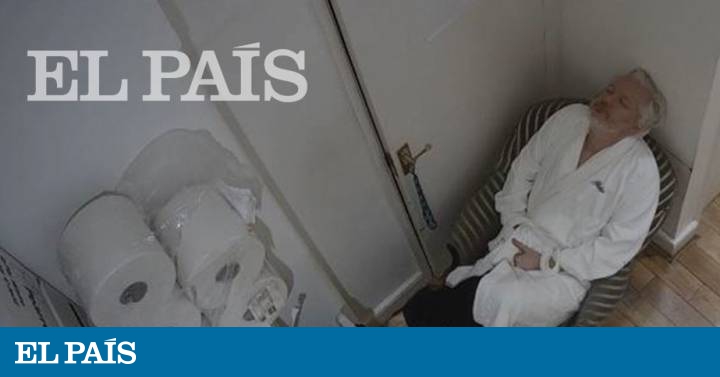 Spain’s High Court is investigating the director of UC Global S. L. and the activities of his company, which had been hired to protect the Ecuadorian embassy in the English capital

Thankyou. I believe his lawyers have restricted access to him.

Mainstream US journalists should be called out for their refusal to take a stand against the abuse of Julian Assange.

It shall come to pass, because, nothing is as historically crooked as England and nothing has changed.

Yes, but it’s not allowed.

But, Wikileaks marches on.

Mainstream US journalists should be called out for their refusal to take a stand against the abuse of Julian Assange.

Absolutely! What more proof does one need that THE FOURTH ESTATE and the majority of US main stream journalists are paid big money to be: PRESSTITUTES, WHORESPONDENTS, AND SYCOPHANTIC, FAWNING PARASITES OF THE AMERIKAN… FOURTH REICH ?

Mainstream journalists do need to be covering Assange’s treatment in prison and make sure that his human rights are not violated. However, Assange was in league with the Russians to rig the US elections. He has greatly damaged the United States and the world by aiding the Russians in their efforts to get trump and many other corrupt Republicans in power. He has unwillingly aided the forces of racism and white nationalism. He deserves prison but not torture.

I feel for Julian Assange. While he has put himself in mortal danger in revealing the crimes of Duopoly politicians, he has reached millions of us and shown us just how corrupt these powerful politicians are, and how far they will go to silence a truth teller.

I disagree with your assessment. In the first place, not all Russians back Vladimir Putin, just as not all folk in the US back Donald Trump. It is an offensive stereotype to use the phrase “The Russians”, to refer to alleged misdeeds of the Russian political power structure.

The fact is, racism and white nationalism are deeply embedded in both Party power structures of Republicans and Democrats. Among the large Latino population in my region, most folk don’t vote. When I’ve asked them, their general response is that both Party’s act against their interests. I spent the last election trying to get Latinos out to vote. I brought up the racism and class oppression of Trump as well as the crimes against humanity of Clinton with respect to her participation on the Drone Murder Team, her support for the overthrow of the government in Libya, and her support for the coup government in Honduras. I encouraged Latinos to vote for the Green Party, rather than staying home, as a means of indicating support for progressive perspectives in a community in which Blacks and Hispanics have been largely cowered into silence by white racism. I am absolutely certain that I had more impact than Assange, in getting Latinos to refuse to vote for Clinton. Would you assert that I should join Assange in prison?

The US is, by no stretch of the imagination, a democracy. Any damage that Putin and/or Assange have done to US electoral process is negligible in comparison to the degree to which US plutocracy has rendered any variance from status quo plutocratic economics, imperialism, and war-mongering, mute.

The USA is making a Criminal out of a Hero.

So much for the First Amendment and Freedom of the Press.

Just because Hillary and other government officials did not like the NEWS that Assange published does not make him a Criminal.

We have a right to know the Truth we should Make Assange a Hero along side Daniel Ellsberg.

Otherwise Tear up the Constitution and use the First Amendment as Kindling.

If this was the Second Amendment we were fighting for the Maniacs would be on the steps of the Supreme Court with their AR -15 Semi Automatics.

I am absolutely certain that I had more impact than Assange, in getting Latinos to refuse to vote for Clinton.

Some Russian business men spend about $1 million to try to influence the outcome of the US 2016 election and the nation goes into a frenzy! I have read that the CIA spent billions getting Boris Yeltsin re-elected in 1996; at one stage he was polling at around 8% popularity. At least we are good at our national sport, Yeltsin was re-elected!