Ben Carson—who infamously suggested early in his tenure as head of the Department of Housing and Urban Development that public housing for the nation's poor should not be "too cozy"—is under fire for a pricey redecoration of his D.C. offices, which comes as the administration proposes billions in cuts to his agency's annual budget, a move that could force millions of Americans out onto the streets.

The damage done by over 37 years of HUD defunding is seen clearly on the streets of our cities. Homelessness is rampant. Carson is another sociopath in the Trump mold. We need to reserve spaces for these people in Guantanamo because their criminal acts against the US people and the world deserve to be punished. Obviously neither Trump, Carson nor any of the others in his regime believe in a “rule of law.” They only believe in a rule of “money and power.”

Why is a former neurosurgeon at the head of HUD? Shouldn’t he be serving in the National Institutes of Health or something like that if he is going to be in government. Carson ran for president with no qualifications for the job just as Trump did and now he is in a position he is not qualified for just as Trump is. There seems to be a pattern if you look at various agencies. The most important qualification for a high-level job seems to be a lack of qualifications. It is sort of meritocracy in reverse.

That quote by Marie Antoinette, is apt for the entire Trump Administration!

Yea, kind of like how Jared Kushner has become an expert on international affairs even though his own family can barely run their real estate company. What experience does he have for such an important role? The world leaders must be laughing at the US.

Why is the president’s son in law making millions of dollars in Hud subsidized rental property?

Maryland Attorney General is investigating the practices of the apartment company owned by Jared Kushner's company.

I live in Section 8 subsidized housing. I eat at my desk, along with my keyboard because 1) there is no room for a dining room table 2) I cannot afford a dining room table…I wonder if Carson would let me move in with him and his buddy’s so I could eat at that table. Whatya think? Maybe have a real place setting? What a frickin pig, buy him and his staff a trough. Slop Slop Oink Oink

Carson seems to think he is above the law. What do you expect from a man who commissions a portrait where he is being personally blessed by Christ.

Does anyone really think an expensive table billed to taxpayers, is the extent of Carson’s crookedness?

This sort of violence against the PEOPLE of the USA has grown all too acceptable, but if the PEOPLE gather together to put a stop to such abuse their action is called a riot. So what do you do when the Corrupt Ones are filling the Courts with imitation judges who have no respect for the rule of law?
Anarchy is not something that may be coming…
Anarchy is already here!
Only it is not the little peons rising up, who will then be shot down by the police. This time, the practicers of anarchy ARE the ones in positions of authority to ORDER the police to shoot!

Well, if their plan is to destroy the gov, they should be accused, and tried for treason and hung!

This struck me as almost funny (aside from the horrorifying in your face profligacy of course).
We recently cleaned out my in laws house for their move to a retirement community. All the nice furniture they spend huge proportions of their pay on and lovingly polished each week for decades they had to pay to haul to the dump. They planned on selling it through a nearby auction house and were anticipating a windfall though we gently tried to tell them it was not going to happen.
The auction house came out and told them it was lovely and in unbelievably good shape but they just could not take it as it would cost more to haul than they would get for it. They tried to sell it through Craigslist and no one would of course pay what they were asking. Finally on the eve of the move they with quite a bit of anger, had us hire a truck to take it to a charity shop. We arrived and they said sorry we do not take large brown furniture anymore as it takes up too much space and does not sell. Next stop two other charity shops. Finally their 3 sons said we are done we are taking it to the dump. They had to pay $265 for the dump to take it.
The point being…Doc Carson… You made taxpayers pay thousands for something so dated - a huge brown dining set with velvet covered chairs!- as to be completely worthless… a little out of touch there doc…

The enormities and crony corruption within this regime’s favoring/serving big-money is over the op…
Carson is now forced to cancel the $31,000 dining table…maybe he will also resign…it’s like rats leaving a sinking ship…of state. 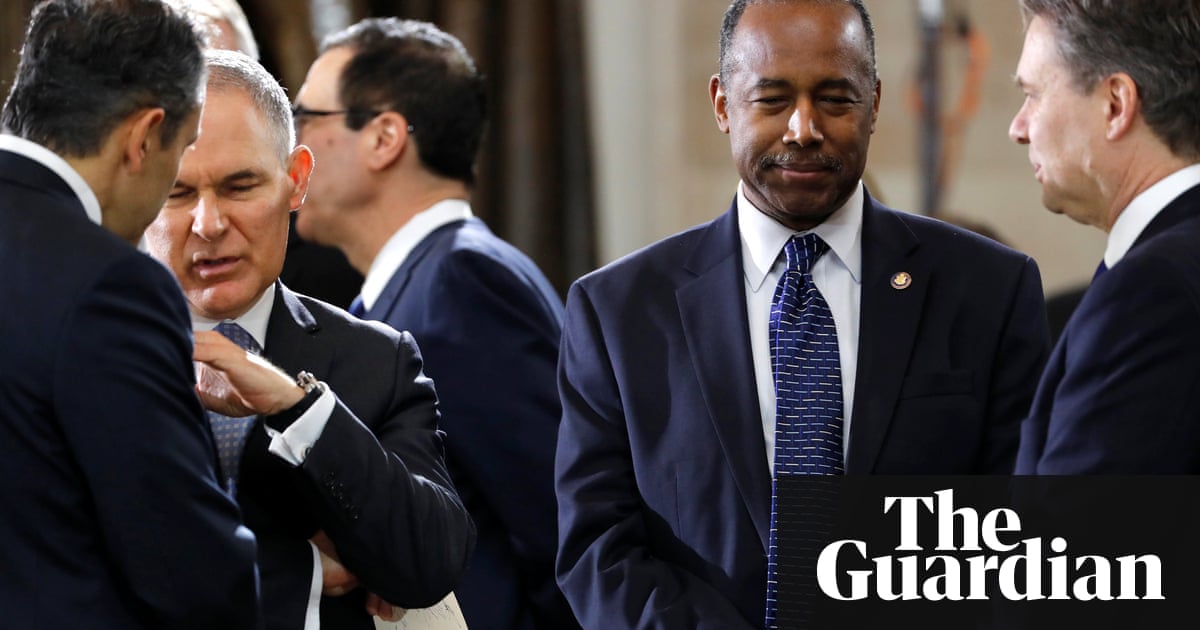 Carson promises ‘full disclosure’ over use of public funds to buy furniture, in his first public remarks since news of Hud spending broke