Why Not Also Go With “The Kitchen Table” Impeachable Offenses for Removal?

The DINO “leadership” is so timid and actually complicit - seemingly working to sabotage their own impeachment “efforts” that their success is in serious question; as are the coming “election”.

Nancy Pelosi acts as dictator in forcing the agenda of narrow focus and infuriating weakness on the party rank & file as a whole, sabotaging progressives and our issues time after time. With craven leadership like hers it’s no wonder trump maintains his destructive policies; many with support from pelosi & co.

The same political scheming and fear from the DINO “leadership” is, and has been, an utter failure, as election after election losses clearly show. One would be accurate thinking pelosi and the other entrenched stooges for the status quo are in league with trump and his salted-earth agenda, climate denial, and inherent racist bigotry!

“Faint heart ne’er won fair lady” and just as true, elections and reforms for the Common Good as well. Pelosi and her ilk are faint of heart, complicit, and corrupt as well, betraying the progressive electorate and our issues as they more often than not serve vulture capitalism and greed above the Common Good.

“Pelosi’s motivations appear to be political: fearful of losing her majority and fiercely protective of the more conservative members of her caucus, she has directed the impeachment proceeding to be as small, focused and palatable as possible, so as to placate moderate suburban voters and not to force her conservative members to take many difficult votes.”

100 million eligible voters didn’t bother in 2016, and that reality apparently never enters the thinking or “strategy” of the DINO sellouts, especially Pelosi ! 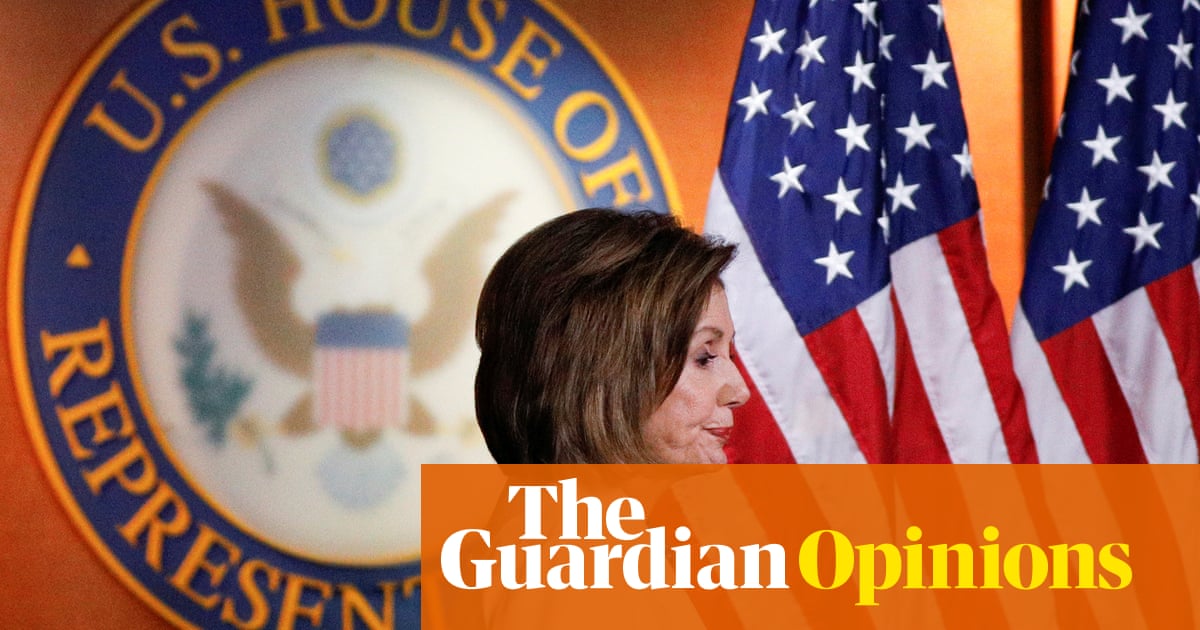 While we’re at it, let’s throw in the Kitchen Sink.

As Emphyrio says, Nancy Pelosi, but to be fair, let’s also add the conservative Democrats she works so hard to protect for the sake of those elusive suburban swing voters. Wouldn’t want to scare those potential donors off with an in-depth investigation of Trump.

You’re right Mr. Nader. There are multiple reasons why President Trump should be impeached and removed from office. It’s a fairly easy call, pretty much.
However, if the Executive Branch of the Federal Gov’t is brought to heel for exteme overreach and abuse, the Uniparty’s hold over the majority of the citizenry who be clearly weakened. And, worst of all for the Uniparty’s bosses whose ( $$$ ) mega-billions rule through Executive Branch fiat, the bought-and-paid-for Congress might actually have to take positions on controversial issues before them. They might even have to explain to their constituents why they voted for the agenda of The Corporotocracy over the known desires of the citizenry. We can’t have that now, can we?
That might mean:
Corporations and Billionaires actually have to pay taxes under a transparent and fair progressive system.
The Endless War Budget, and its ancillary spin-offs like all the clandestine Alphabet Agencies, would have to open up their books and actually answer the question, " Where did all the money go and why did it go there ? " We can’t have that now, can we?
Really, the three current branches of the Federal Gov’t under the control of The Corporotocracy; who own the office of the POTUS are actually set up to deny the citizenry what it needs, let alone what it might want. Because if they let the citizenry get comfortable and, actually enjoy the fruits of their labor, their rights under the Constitution and what they might want the gov’t ( The Corporotocracy ) to do, or not do, we couldn’t be kept under their constant watch and big fat thumbs. We can’t have that now, can we?
Just sayin’.

We’ve been skipping down this road for a long, long time.

Yes. As a great song from my parents’ generation says, “It takes two (corrupt parties) to tango.”

If the US were truly a meritocracy, as we’re expected to believe, Ralph Nader would have been president since 2000.

The in depth investigation and indictment that she fears could, if well conducted and done with panache and courage, be persuasive to many Americans. Many. That opportunity has been lost.

Your comment is heart-breaking because so awful, so true.

RE:
“Above all, for Speaker Pelosi, a broad and compelling indictment of Trump will move the citizens otherwise described by Abraham Lincoln as the “public sentiment,” to sustain an impeachment verdict by the Senate.”

But Ralph, the Dems don’t want that. They don’t want an engaged populace (as that could turn against them). The narrowness of the impeachment inquiry speaks volumes: this is about differences in foreign policy. That’s what Pelosi, Schiff and the CIA care about.This is what the Democrats’ antagonism towards Trump has been about since before he entered the WH: a much more agressive polkcy against Russia.

This is what happens when for decades the lawless politicians have not been held to account. The lawless military is not held accountable both financially and militarily.

The elitists in dem party are complacent with republicans.

The whole of republican party needs to be impeached.

Another excellent article Mr. Nader. How I wish more citizens could have the opportunity to read this and the mental framework to understand it.

“Domestically, the President can accelerate the emergence of a fascistic, corporate state.”
I’m scared to admit it but I think this is what the duopoly wants. At least the trains will run on time…
Can Ralph admit himself as an expert witness into the upcoming impeachment trial and call out the Dems for their reasons for NOT doing what this article says? Then not only the Repubs but the Dems too will at long last be held to account in full public view and on the record.

It’s all going just fine. Not to worry the supporters of the U S Constitution and a free, fair, and totally independent American democracy and its elections are in the process of taking down an ignorant or compromised Putin pawn President and his cowardly sycophant political Party that are intolerant, naive, gullible,or just plain dumb enough to fall for the not too sophisticated Russian anti democratic propaganda, division, alternate facts and truth, and wild conspiracy theories attack they have repeatedly used in European nations and now here. My god even less sophisticated Ukrainians were smart enough to throw this Russian corrupt and anti-democracy strategy out by an about 70% vote. Only Trump, his majority intolerant, and/or naive, gullible, unsophisticated base and a cowardly sycophant Party before country Republican Party and Congress have embraced or are too weak to resist this blatant Russian attack on our democracy, Not here, not now, not ever.

The Uniparty Consensus is; not everyone gets to have nice things so, there’s that, too.
Thanks CD for publishing this article by Mr. Nader. Ralph continues to hit his marks at every given opportunity. What a great citizen and patriot.

This has been obvious for a long time, and rather puzzling. Why put it all on the Ukraine affair?(an affair, by the way, in which Joe Biden is involved in corrupt activities, which of course does not excuse anything DT did). Is there some reason that all these other, quite obvious and blatant violations of the Constitution are less relevant? Excuse my confusion. Ralph Nader is right on, as usual. Also note that the entire matter is being framed in the “official narrative” that lays blame on Russia for a whole lot of fictitious nonsense intended to cover the asses of the high and mighty and set the stage for inevitable war.

Quite true. In my opinion, the main reason Richard Nixon resigned rather than waiting to be impeached (this seems evident from the tapes), was that the investigation would turn up critically damning connections between various players (E.H. Hunt, for example) that would open up questions all over again regarding the assassination of JFK (which Nixon referred to as “that Bay of Pigs thing.”) So, perhaps something similar is at work here. A thorough investigation of matters (even the immediate matters at hand re: Ukraine) would implicate a lot of players in the corruption that is so widespread among many powerful people. I’m surprised there isn’t more attention focused on what really happened with the right wing coup there, all the blatant and clearly proven involvement of the US state department (and others). If the truth were more widely known about that whole matter, Nazis and all, it would pretty much rip the heart out of the whole “Russia” narrative - which appears to be central to all discussions, left, right and in the corporate media.

The thing is that Pelosi never wanted to impeach. That wasn’t in the usual playbook and with Bernie and Warren in the race and people like AOC in the game, Pelosi’s inner conservative has become alarmed. Besides if Trumpo the Clown and ‘Perfect Pence’ were to be removed (an actual possibility given the lengthy list of wrongdoing) guess who would be prez! Aside from Pelosi feeling that she would not be qualified to be prez (she knows how old she is), she like all politicians abhors the idea that any of them could be removed from office.

Pelosi is a conservative. Maybe not a Fux News hard right fascist but still a conservative nevertheless. Thus the Dem’s allegiance to the big money campaign donor system. A conservative’s view of democracy. If the roles were reversed the Repubs would not only use every possible reason to impeach but would add and invent numerous others so as to overwhelm the public’s perspective on impeachment. The Repubs would go out for blood but the Dems under Pelosi come near to betraying their oaths to uphold the constitution by limiting the list of Trump’s offenses. They thereby help Trumpo to evade his just deserts.

What would the Republicans have done if a Democrat President had committed so many offenses to the Constitution?